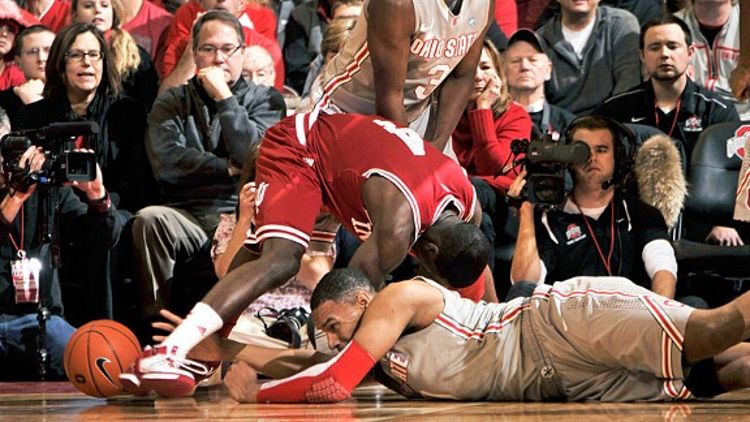 While the rest of the country watched the Packers choke in the NFL playoffs Sunday and made Discount Double Check jokes that quickly became more annoying than the commercials themselves, most college basketball fans in the heartland of America devoted at least half of their attention to the Ohio State-Indiana rematch. Two weeks earlier, largely because Ohio State’s three best players battled foul trouble all game, the Hoosiers upset the Buckeyes in Bloomington and sent a message to the rest of the country: Their win over Kentucky wasn’t a fluke. Thanks to upset losses by both teams earlier in the week, the rematch didn’t have quite the luster leading up to it that it would’ve otherwise had, but it was still a significant game. One team was going to get back on the winning track, while the other was going to fall behind in the race for the Big Ten title. In the end, Ohio State smothered Indiana defensively and cruised to a 17-point, 80-63 win over the Hoosiers on the back of Lenzelle Smith Jr.’s offensive explosion. We’re still two months away from the NCAA tournament, and this was only one game, but let’s overanalyze it anyway.

What the Win Means for Ohio State

Being in a business in which many people are quick to point out when I’m wrong, predicting an Ohio State blowout for the past two weeks and then seeing my prediction come true Sunday felt pretty good. Of course, it wasn’t exactly that tough of a prediction to make, considering that with the exceptions of Lorena Bobbitt, Aaron Burr, and Jenna Jameson, nobody gets revenge quite like Ohio State basketball does. Having practiced for Thad Matta for four years, and occasionally playing for him a little bit during that time too, I can confirm that the element of revenge is definitely a big deal in the Ohio State locker room. That was proven in Sunday’s steamrolling of Indiana, as well as last year’s beat-down of the Wisconsin Buzzcuts after the Buzzcuts gave Ohio State their first loss of the season.

In the short term, the win over Indiana was significant for a couple of reasons. First and most important, there was the matter of revenge. I was at the Ohio State-Indiana game in Bloomington on New Year’s Eve, and watching it in person, I couldn’t help but think that though the Hoosiers won the game, it was clear that Ohio State was the better team and just couldn’t find a rhythm with their three best players on the bench. The Buckeyes confirmed this Sunday and proved that despite two early losses in the Big Ten, they are still the conference’s most talented team.

Sunday’s win also means the Buckeyes were able to wash out the bad taste that lingered in their mouths after losing to Illinois earlier in the week. Ohio State’s fans and coaches were anxious to see how they would bounce back after a disappointing loss. (That might be a tired cliché, but it’s a cliché for a reason.) Some felt as though Ohio State lost at Illinois because they weren’t as focused as they should’ve been and/or they possibly just aren’t all that great to begin with. Others, though, felt like the Buckeyes actually didn’t play too poorly and lost only because Illinois’ Brandon Paul had the individual game of the year in college basketball and was in such a zone that had he drop-kicked the ball from half court, he probably would’ve made it. Destroying Indiana is an encouraging sign that indicates it was more of the latter than the former.

In the long term, dismantling what has widely been considered one of the best teams in both the country and the conference proves Ohio State is still one of a handful of teams with a legitimate shot at winning the national title, and — with respect to Michigan State’s impressive season thus far — is still the favorite to win the Big Ten. Also, the emergence of Smith is nothing but a good sign for Ohio State, because the Buckeyes already have three NBA-caliber offensive weapons and a capable pass-first point guard who plays within himself. That means if Smith can sustain even a fraction of his performance Sunday, Ohio State will be nearly impossible to guard. Pair that potentially unstoppable offense with a defense that can be dominant when it wants to be (they held Indiana to just 14 points in the first half) and it’s clear that the Buckeyes aren’t going away anytime soon.

What the Loss Means for Indiana

After a hot start including three wins over Top 15 teams that brought the Hoosiers back to national relevance, Indiana has lost two straight and now appears to be at a bit of a crisis point. In the grand scheme of things, simply losing to Ohio State isn’t really that big of a deal; this was a game that Indiana was never going to win anyway. Ohio State has been dominant at home this year and has already embarrassed national powerhouses such as Duke and Nebraska, so Indiana fans who had been looking ahead and counting wins and losses likely had an “L” written in permanent marker next to Sunday’s game for a while. That said, the way Indiana lost to Ohio State and the fact that the loss came on the heels of an inexcusable loss to Minnesota at home is certainly reason for concern.

Ever since Indiana knocked off Kentucky in early December, the Hoosiers have kind of become the Tim Tebow of college basketball — fans are split down the middle on how good they think Indiana really is. On one side of the argument are the believers in the Indiana resurgence. This year, it’s a group mostly comprised of Hoosier fans and analysts who want Indiana to be good again because it makes college basketball better as a whole. And the other side of the argument consists of people who are hesitant to refer to what is essentially just a 12-20 team plus Cody Zeller as one of the country’s best. This group consists mostly of Purdue and Kentucky fans, as well as fans of other Big Ten schools who don’t want to admit that Indiana is good because it means it will be that much harder for their school to win a conference championship.

As is the case with most things, the truth is probably somewhere in the middle. But on Sunday, that second group appeared to be the smarter of the two, because for most of the game, Indiana looked like it didn’t belong on the same floor as Ohio State. Indiana has struggled on the road so far in conference play, and it’s easy to group this loss in with its other two subpar Big Ten road performances and make a canned comment about how hard it is to win on the road in college basketball. But what I saw Sunday was unlike the other road games, because for the first time all season, Indiana played an opponent that was both more talented and more hungry for a win.

The key to the Hoosiers’ success early in the season was that they were the hunters. Now that they’ve cracked the Top 10 and have established themselves as the biggest surprise in college basketball, they have become the hunted. The home loss to Minnesota notwithstanding, this hasn’t been that big of a deal because Indiana has been significantly more talented than the teams that were looking for an upset. But on Sunday, Ohio State’s suffocating defense and offensive execution showed what can happen when Indiana is hunted by a team that is already more talented than they are. Ohio State destroyed the Hoosiers in the first half so badly that when I talked trash to my brother, an Indiana alum, at halftime, he resorted to saying, “I guarantee we won’t lose by more than 30.” And he seriously thought that comeback was acceptable. Only when the Buckeyes let up in the second half did Indiana make the final tally a more respectable margin of defeat.

If I were the type to rush to judgment, I’d say that based on last week’s two games, Indiana really isn’t that good after all. Whether that’s true or not, it’s clear that it is impossible to win in college basketball without being either the hungrier or the more talented team. Indiana won’t have the luxury of sneaking up on anybody for the rest of the season, so the Hoosiers’ success (or lack thereof) from here on out will almost exclusively depend on how talented they are. Which brings us back to the million-dollar question — just how good is Indiana?