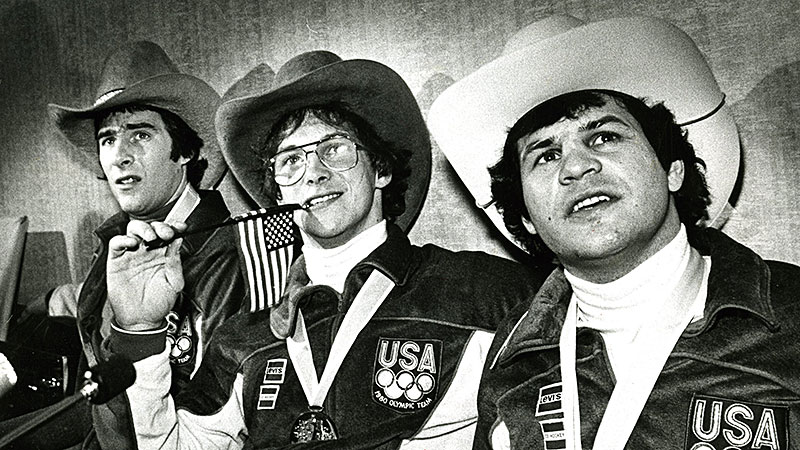 I collect old magazines. Typically, my two main go-tos are Jet and Life, but on a fateful trip to an antique store in New Orleans over All-Star Weekend — embarked upon to eliminate the chance of catching an impromptu Kevin Hart performance — I had a chance encounter with a 1980 issue of Playboy.

The initial draw was the person on the cover, Suzanne Somers. I had no idea the mom from Step by Step was in Playboy. Flipping through, however, I was reminded of the deep editorial history of the magazine. This issue contained an excerpt of a novel by William F. Buckley, a profile of Klan Grand Wizard David Duke, Shel Silverstein poems and cartoons, reviews of Kramer vs. Kramer and The Great Santini, and sketches by LeRoy Neiman.

Closing the magazine to decide if this was worth the $20 purchase, I immediately realized I’d skipped over the most important, highly topical story of them all.

Inside, there were 18 pages on the then-upcoming 1980 Winter Olympic games in Lake Placid, New York — essays, predictions, and advertisements. It’s a phenomenal time capsule for where the country, world politics, and the Winter Olympics were at the time, and evidence of how much all three have changed. 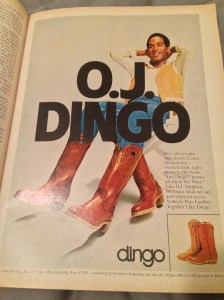 So there’s that. As for the Winter Olympics advertisements, there were two main themes. The first: budding technology. 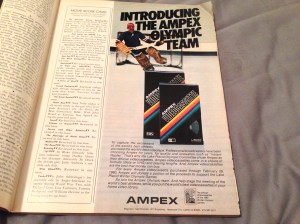 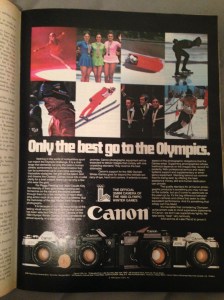 The other: treating your heartburn with the help of Sammy Davis Jr. 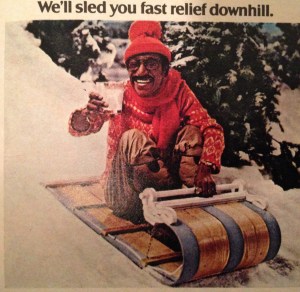 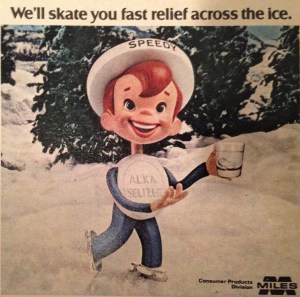 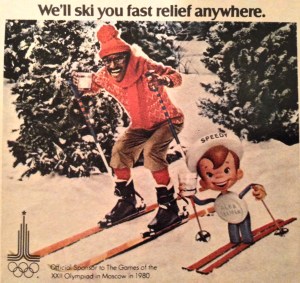 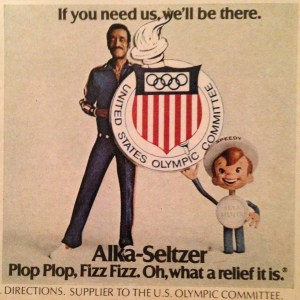 The second-best part about this ad is that Sammy Davis Jr. was so famous, his name doesn’t even appear on the page. The best thing? 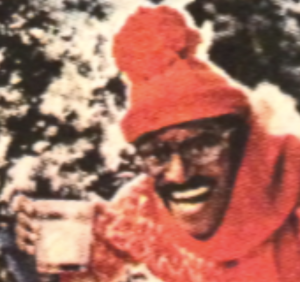 It’s simultaneously a fairy tale and a daymare-into-nightmare-into-next-day-daymare.

The advertisements are fun, but the Winter Olympics coverage is even better. There are two pieces: a story on downhill racing by John Skow, and a breakdown of the events, with thorough historical background information and predictions, by longtime Playboy sports editor Anson Mount. (For the AMC-inclined, yes, that is the father of Hell on Wheels star Anson Mount.)

Choice quotes fill both pieces — some beautiful, others hilarious, a few off-putting, and all very much of the tone of the time. Some of the highlights:

“Let us admit to a scrupulously fair-minded prejudice: It is skiing, as only a figure skater’s mother could fail to recognize, that brings the winter Olympics closest to grandeur.” —Skow

“Danger is not the whole of it. What is sensed is hugeness and complexity; resonances are set up in the high country that prevent even the most simple-minded of the mountain events, luge sledding and bobsledding, from being entirely ridiculous.” —Skow

On Communism’s Place in the Games

“One of the disadvantages suffered by American contestants (as well as those of other Western countries) is the relative openness of their preparations and training, as opposed to the great secretiveness of the Eastern European countries. As in the summer games, the main competition is not so much among the athletes of individual countries as between the contingents from Communist and non-Communist countries.” —Mount

“The East Germans are especially paranoiac in their concern for secrecy. Burly security guards hover over the East German equipment as though it were a secret state. Although there is much after-hours camaraderie among the athletes of most countries, the East Germans (almost all of whom are military personnel) keep to themselves, never go anywhere except in groups and refuse to speak to outsiders. They are especially hostile toward the West German athletes.” —Mount

“Western participants, therefore, rarely have more than an approximate idea of the identity or excellence of their Communist bloc competitors. Although most Eastern European countries enter the several pre-Olympic world competitions in the various sports, they don’t always send their best athletes. Other participants never know whether or not the East Germans are going to show up for an event–but when they do appear, they nearly always excel. In 1976, 16 year old East German speed skater Andrea Mitscherlich showed up for the Olympics and won a silver medal. No one in the Western world had heard of her before, and no one has seen her since.” —Mount 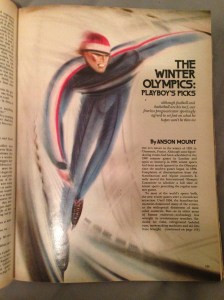 “Television has brought the dizzying speeds and poetic grace of winter sports to desert towns and tropical islands. As a result, spectator interest in the winter games now rivals that of the larger summer games.” —Mount

“The television people had bought themselves down jackets by now, and they were learning their trade. For some reason, it was almost impossible to photograph steepness so that it looked steep, but the flow of a downhill race, seen heretofore only by circling buzzards, was caught superbly by the tube. Even so, it was not till four years ago that most of us really saw a downhill. When we saw it, however, it stayed seen and anyone who had the set turned on that day can start a cassette player in his head and watch the whole thing again.” —Skow

“To most of the world’s sports buffs, the new winter games were a second-rate attraction. Until 1956, the Scandinavian countries dominated many of the events, to the widespread disinterest of most other countries. But — as in other areas of human endeavor — technology has wrought its revolutionary wonders. Enclosed ice rinks, refrigerated bobsled runs, snow-making machines and ski lifts have brought the thrills of the slippery sports to moderate climates and to recreation buffs who never before even saw a pair of skis or ice skates.” —Mount 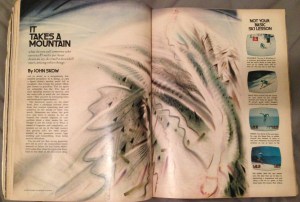 Other themes include: athletes noting the games have become more intense (“Now, it’s not so much fun. Before, we were all in the discos”); refrigerated bobsled runs, luge runs, and speedskating tracks recently built in the States allowing American competitors to train more months out of the year and thus be more competitive; the United States attributing its lack of success in downhill skiing to a ski resort’s unwillingness to turn over courses to a few Olympic hopefuls; events becoming more specialized (in the past, the best racers would compete in all three alpine disciplines).

In addition to these topics running through the two pieces, there was also Mount’s well-researched, highly confident, often wrong slate of predictions:

“The United States could take three of the four gold medals in figure skating, with the other one — in ice dancing — probably going to one of the Russian pairs.”

[Note: Everything about the United States was wrong, and the part about the Russians was absolutely correct.]

“If the American skaters are seriously challenged in any of the events other than ice dancing, it will likely be in the pairs competition, where the Russians will also be top contenders.”

[Note: The Americans were challenged so much in the pairs that the Russians won that, too.]

“If there is a single odds-on favorite to win a gold in any event in this year’s Winter Olympics it is the US’s Charles Tickner. If he receives strong competition, it will likely come from Robin Cousins of Great Britain.”

“Our skaters should also take the lion’s share of the medals in the speed events.”

“A Russian coach told an American counterpart that 280,000 speed skaters competed on a regular basis in the Soviet Union. There are only 2,500 in the United States.”

“Eric Heiden is a 21-year-old premed student at the University of Wisconsin. He is by far the dominant male speed skater in the world today, to the point where at both world championships last year, he won all eight men’s events, from 500 to 10,000-meter distances.”

[Note: Below is Eric Heiden. And all of those medals are gold. And they’re all from 1980, where he won five of the United States’ six gold medals.]

ICE HOCKEY a.k.a. On the United States Having No Chance in 1980, The Year That Really Awesome Miracle Happened

“Unless you get sadistic kicks from watching one athletic team humiliate all the others, don’t bother to watch the ice-hockey contests.”

“The Russian pucksters are in a class by themselves. Their nearest competitors, the Czechs, are a distant second. The Russians are so good that when they played an all-star team from North America’s National Hockey League, they won two out of three.”

“The Russian hockey team took the gold medal in each of the past four Olympics. The last time it lost was at Squaw Valley, California, in 1960, when the Americans — to everyone’s amazement — finished first. The home ice could be an advantage again this time, but it will be an uphill struggle to get beyond the bronze medal.”

“Wondering what’s become of the East Germans in the hockey competition? After the 1968 Olympics, they realized they’d never be number one in ice hockey, so they dropped out of the event and haven’t been back.”

“The luge is a suicidal sport practiced on one- and two-man sleds (distantly similar to the sleds parents give their children on Christmas) that are ridden down runs that feature sharp hairpin turns and precipitous straightaways. Speeds can exceed 60 miles per hour and wipe-outs are spectacular and bloody.”

“Participants are called sliders. They are also frequently called crazy by other winter athletes.”

Back issues of the 1980 Playboy are available online for a price, and I highly recommend obtaining one to read both pieces in their entirety, since the essays didn’t quite make it to the Internet. Or, who knows, maybe we could Ya-Ya Sisterhood of the Traveling Pants this whole situation, and I send it to you over the summer. And then you send it to Tamblyn, who sends it to Lively, who then sends it back to me. Who knows.

The Designated Player: On the Death of a Goat