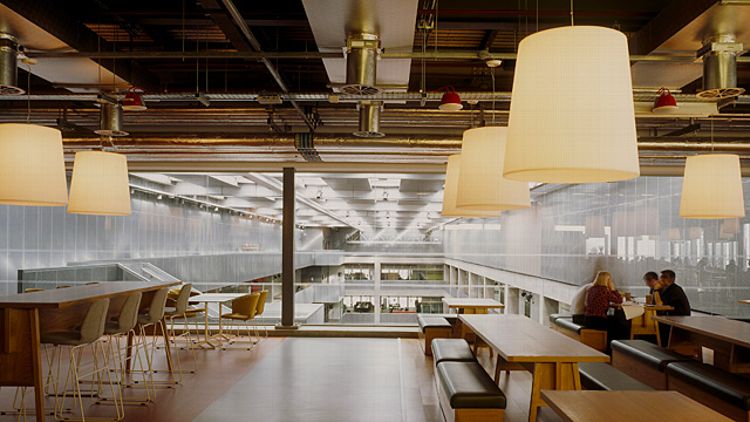 Scene: The writer is stuck in Glasgow for a day, waiting for a flight back to New York. He goes to a café for breakfast. He reads the paper, sips his coffee, and starts to plan the day. Two men sit down at the table next to him.

The two men start to talk. Actually, strictly speaking they appear to be damned to talk — there is little volition as the words start to flow. The tone of their interactions and the slow pace at which they move and barely regard each other is more suggestive of companionable silence than conversation, yet there is a steady stream of phrases passing between them with a low, thoughtful urgency. It’s utterly engaged yet strangely dispassionate, as if they’re running through a vital but quotidian safety checklist, or a catechism:

“Were you at the game, Aye?”
“Aye. Brown’s lost a yard.”
“Mind, he was never quick.”
“Aye, but he looked tired, like.”
“See fucking Caley scored a goal that if Barcelona scored it there’d be people droolin’ about it? Twelve passes or something in the buildup.”
“Aye? Mind, Fabregas was a beast in the middle last night.”

“What was the score in the Caley game?”
“Two-nil.”

I love following soccer in my adopted country of the USA. I love watching the conversations around the game evolve — the evolution of a critical culture as much as an evangelical one. I enjoy watching cultural cringe giving way to confidence in ever larger pockets of the country as the domestic game finds its voice. I missed the opening weekend of NBC’s Premier League coverage, though the network’s bullishness in the days and weeks leading up to it has been hard to miss in New York, and felt like the inevitable next step of a process of growth.

But sitting in a Glasgow coffee shop on the morning after that opening weekend, and hearing that reminder of what I once took for granted — the tone of two people uttering football (because what else would you utter?) — gives me a jolting reminder of the distance the sport still has left to travel within popular U.S. consciousness.

There is a further break in conversation. One party chews thoughtfully on his toast. Just to his side, a copy of the front section of the newspaper is pristinely folded, destined to remain untouched. His companion is browsing through the already thumbed sports section.

“See Villa beat Arsenal three-one.”
“Aye. They’re like Celtic for the past six years. Never spend any money. They need to give that boy the cash.
“Did you watch the game last week?”
“Aye.”
“Was Miller good?”
“He was decent enough, like. One of the best three.”
“Maybe Vancouver’s good for him.”
“Do you follow that MLS?”
“Ah catch the odd game, but to be honest if ah’m up to see it, it’s only because ah’m pished. Kind of defeats the purpose.”
“There’s a few boys out there now.”

The men’s conversation reminded me of Walter Benjamin’s observation in Illuminations about the engaged demeanor of Weimar Berlin bike messengers discussing the outcome of bike races they’d watched: “It is inherent in the technique of the film as well as that of sports that everybody who witnesses its accomplishments is somewhat of an expert.” (It was an image that also came to me when reading Brian Phillips’s excellent piece on the projections upon Luis Suarez.) There was an embedded seriousness in the way the participants considered their relationship to their activity and its natural place within the city and indeed the culture. The fundamental logic of their exchange was conservative — checking that the foundations of shared experience are still there, rather than trying to build them.

As Benjamin alluded to, those living in entertainment industry towns like New York or L.A. may recognize the tone too. There’s a sense when overhearing people discussing new movies or shows in those cities, of people assuming shared ownership of a natural resource — and a concurrent sense of obligation to offer a particular type of opinion about it. These exchanges rate actors’ and directors’ performances not for how much they entertained, but for their relative productivity set against their own history (“They were good in this, bad in that”). And however misplaced or artificial that sense of ownership is, the idea that those who discuss these phenomena are somehow custodians of sorts has currency as a social convention. It’s not that these conversations or assessments are exclusive to these cities, but I’m not convinced they carry the same trace of civic duty, if not pride, elsewhere. So it is with the two Scots beside me and their manner, as they breathe the day’s football.

“How was Hutton last week?”
“He was OK. See there was a time when he started out ah thought he was going to be great, but ah don’t know what happened him … is he back at Villa now?”
“Aye. Sure, they brought him back from Mallorca when they thought they were going to be relegated.”
“Right nuff … They’ve done good this summer. Good business.”
“Aye. Top 10 easily, ah reckon.”
“Ah actually want United to win it this year — for Moyesie.
“Aye. Better him than Mourinho.”
“Ah like Mourinho.”
“Ah fuckin’ hate him. See anything that reminds me of Seville …”

“Aye but he did what he had to do. He knew right well Celtic were going to fire into them, so he broke it up, had the boys flopping everywhere and he won it — all those boys greetin’ because he never won it in style. Ah’d take that in a heartbeat — Celtic boring the arse off you and winning a European Cup the next year?”
“Ah still hate him.”
“Ah hate Terry more”
“He’s some player mind.”
“See now Carvalho’s gone, he’s been shown up. He was just the big man.”
“You need that, but.”
“Aye. Well.”

When I speak soccer with American friends there’s still, however faint, an underlying thrill that we’ve found each other. But what I hear in Glasgow is a familiar audio sample of two people somehow confirming they are still here, even as the country they are from drifts further from power in the ongoing soccernomics realignment of the world. It’s a drift that may favor a territory five to eight time zones west in the coming decades. It’s not what they say, so much as the way they say it. The globalization of the game means that with a few minor tweaks you could feasibly have heard the words of this rough transcript spoken this morning by the right two people in a Brooklyn café. But you’d be unlikely to hear the same tone or grain of shared experience. These two people weren’t so much talking football, as having football talk through them. Seen from my slightly alienated perspective of 10 years out of the U.K., it was like witnessing a passage of high-modernist theater where the actors are two teleprinters scrolling out rote exchanges.

Which is all to say, I enjoy being in a moment of “Every game — LIVE!” in the U.S., but on what is just past a decade to the day since I’d moved to America, it only took this exchange to remind me of another life, where the game was so deeply embedded in the culture around me that I barely gave thought to whether I was talking about it all. For a moment, overhearing it, I miss the ease of it all, compared to the sense of striving that permeates every aspect of American soccer culture, right down to Twitter exchanges. Would I swap places? No — that striving is still necessary and in many ways part of the pleasure of it all (as a fan it’s affirming to feel your presence matters), and frankly at this stage of the global game there’s nowhere to truly swap places with. But I’m also looking forward to seeing not just how “big” soccer can become in the U.S. (an idea very much at the forefront of the current NBC fanfare), but how deeply it can embed itself in our vernacular experience. When it truly succeeds it won’t be the biggest, it’ll just “be.”

There is another pause. The breakfast spot is beginning to fill up with morning customers. The two men begin to gather their jackets.

“What’s tonight?”
“City vs. Newcastle.”
“I’ve got City finishing top.”
“A lot of boys have Chelsea.”
“They’re just looking at the manager. He’s still two players off. He needs a striker.”
“See if they got Rooney, that’s a whole different ballgame.”
“They’re not getting Rooney …”

This is the final word. The pair get up and pay. For the first time I look up at them but can see only their backs as they depart. They exit in separate directions.