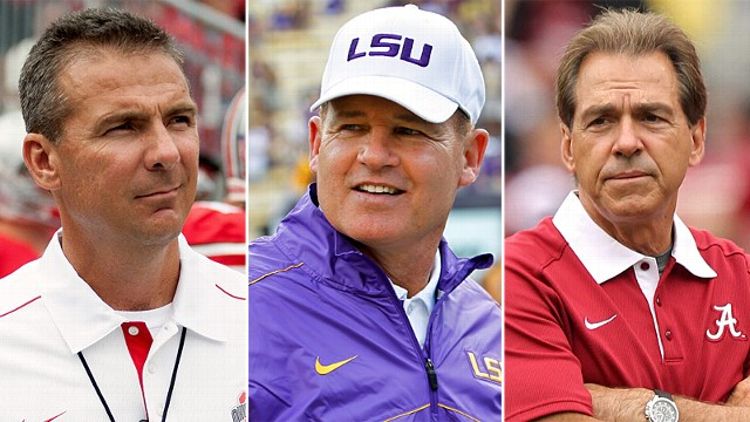 Sorry, you caught me in the middle of my daily prayer to the Southeastern Conference. Like a lot of college football fans, I consider the SEC my guiding light. Only by praising its six straight national titles can I justify my miserable existence as a Big 12 fan. But through three weeks of football — through bumps in the road against Louisiana-Monroe and Western Kentucky — my faith in the SEC has begun to waver. If we college fans are expected to bow before our SEC overlords, we ought to clear up just who’s worth bowing to.

I’ve got three names: Nick Saban, Les Miles, and Urban Meyer. When we talk about the SEC, it’s tempting to imagine a southern behemoth that stretches from Columbia to College Station. The recent spasm of SEC greatness, though, is largely the work of three guys.

Let’s flash back to Saturday, which was a fairly typical day of SEC football. My team, the Texas Longhorns, was playing Ole Miss. Thanks to SEC hype, this was billed as a “tough road test” when it was nothing of the sort. The Longhorns wound up scoring 66 points, the most Ole Miss had surrendered since 1917. Meanwhile, ESPN broke in with updates of other SEC teams in trouble: Auburn needed overtime to beat the Louisiana-Monroe Warhawks, who had beaten Arkansas the week before. Western Kentucky beat Kentucky in OT. Hilltoppers coach Willie Taggart smirked, “Red is the new blue.”

Others SEC schools were giving beatdowns to lesser teams. This week’s victim list included the University of Alabama at Birmingham, Idaho, Troy, Florida Atlantic, SMU, and — a school I only knew as a hospital — Presbyterian.

Florida had a nice win over Tennessee, but so far the Gators look about as fearsome as Kansas State, their next-door neighbor in the AP poll. Alabama beat the hell out of Arkansas, 52-0. But if Bama is a great SEC team, then after 52-0, Arkansas is the inverse: a truly lousy SEC team. They do exist. (Even Tyler Wilson agrees.)

So here’s the SEC after three weeks: some great teams (Bama, LSU), a few sorta-good teams (Georgia, South Carolina, maybe Florida), and a lot of teams that are flat-out terrible. It’s quite … normal.

Now let’s look at the last six years, when the SEC became America’s dominant conference. During that period, Nick Saban, Les Miles, and Urban Meyer won five of six national titles. They made nine appearances in BCS bowl games; the other nine SEC teams made three.

In six years, Saban, Miles, and Meyer produced two of the SEC’s three Heisman winners. In the last three NFL drafts, they produced 17 of the SEC’s 25 first-round picks.

The gap between Saban, Miles, and Meyer and the rest of the SEC is/was enormous. Let’s start with Saban. Paul Myerberg wrote on Twitter Saturday that “Alabama’s defense has allowed 10 TDs over its last 62 quarters against FBS competition. 1 TD for every game and a half.” My friend Josh Levin points out that removing FCS weaklings from this stat actually made Saban’s defense look even better — Bama gave up a handful of TDs last year to Georgia Southern.

Les Miles is someone whose genius I do not pretend to understand. But after seven-plus years of going for it on fourth down, I think it’s real. The Tigers beat Washington 41-3 in Week 2. (“He was very kind of on the money,” Miles said of his quarterback, Zach Mettenberger.) Miles’s 13-0 run before last year’s title game was one of the most remarkable things I’ve ever seen in college football.

Urban Meyer has relocated to Columbus. But if you saw Ohio State’s Braxton Miller fake a Cal defender out of his helmet last week, you noticed that Meyer’s genius doesn’t rely on coaching in the South. He has figured out how to use another wonderfully unusual talent, just like Percy Harvin and Tim What’s-His-Name.

How about the rest of SEC during the last six years? Well, there was one insanely awesome season of Cam Newton. There was Darren McFadden and Matt Stafford and Eric Berry. Vandy started getting stories in Sports Illustrated. Mississippi State showed signs of a pulse. But when we talk about SEC greatness, this stuff is supporting evidence. The S-E-C chant hasn’t become cool because Georgia beat Hawaii.

Remove Saban, Miles, and Meyer and the rest of the SEC looks like the hangers-on filling out the Miami Heat roster. What exactly has Georgia done in the past six years that Virginia Tech hasn’t? Steve Spurrier basically created a program in Columbia — but does that match the resurrection job Gary Patterson did in Fort Worth or Chris Petersen did in Boise? The SEC’s shared southernness, its common vernacular, makes it seem like a single, fearsome entity. But Ole Miss really gives little to Alabama, except a W in conference play in 24 of the last 27 years.

Saban, Miles, and Meyer. These are our SEC overlords worth bowing down to. These are the guys to exalt. It comes as a relief that the rest of the SEC can play well or suck just like us mere mortals. To which I say: Amen.

Filed Under: Auburn, Georgia, Nick Saban, Ohio State, The U