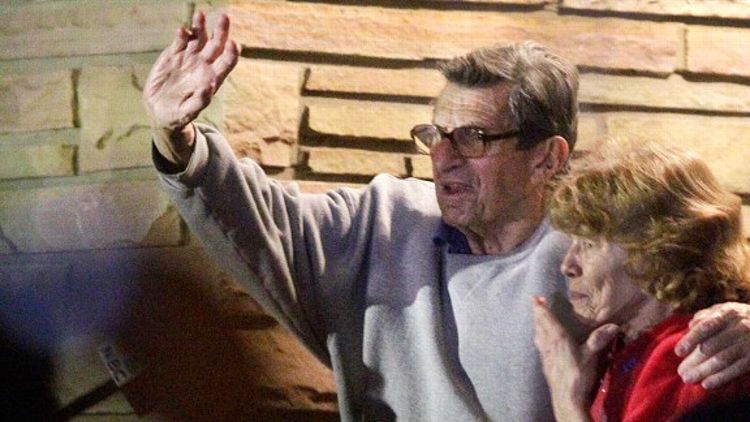 Last night Kutcher sent the following tweet, which has been deleted, after learning that Paterno was out at Penn State: “How do you fire Jo Pa? #insult #noclass as a hawkeye fan I find it in poor taste.”

It was not well received. You’ll find Kutcher’s subsequent Twitter meltdown below, including some tweets that have since been wiped from his feed.

‘Had no idea, thought it was a football thing’: The @aplusk Story

As of immediately I will stop tweeting until I find a way to properly manage this feed. I feel awful about this error. Won’t happen again.

As an advocate in the fight against child sexual exploitation, I could not be more remorseful for all involved in the Penn St. case.

U r right, I need 2b more responsible 4 my voice “@kaykaymour: maybe you should use your brain & get the facts b4 u tweet like an idiot.”

“there is truth in that, I make mistakes “@timothyfurey: @aplusk you’re an idiot””

I’ll own that “@Dustin_Scott: Bad attempt at trying to save it.. You’re still an asshole RT Had no idea, thought it was a football thing.”

true f me “@NikkiLynette: #FuckYouAshtonKutcher for Tweeting your opinion to 8 million people before u had your facts straight.”

honestly it’s me “@RightGirl: Who is more ignorant? @Aplusk, or the over EIGHT MILLION idiots who follow him?”

I am “@timothyfurey: @aplusk you’re an idiot”

agreed “@tommiesunshine: @aplusk with 8 million followers, you MAY want to reserve your opinions until you know the whole story.”

working “@LnWeitzel: @aplusk where have you been the last three days!?”

This is an insane story, I just heard paterno was fired, getting the rest of the story now… Wow.

ignorant indeed “@tedgruber: Ignorant RT @aplusk: “Had no idea, thought it was a football thing.””

It should be noted that Kutcher wasn’t the only person weighing in on Paterno’s exit in 140 characters or less. We also noticed tweets from: