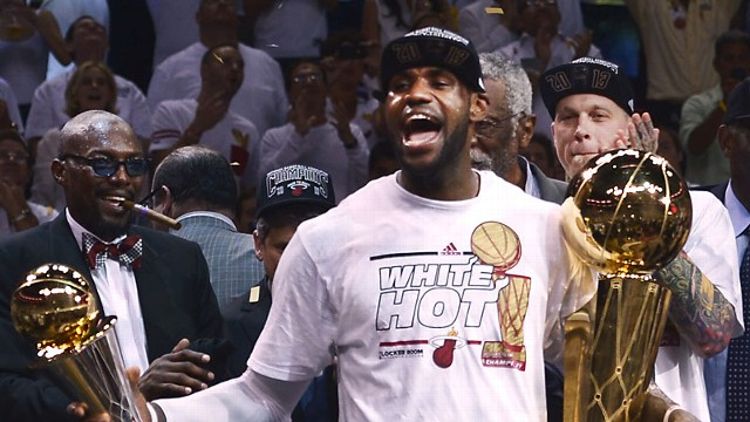 Every now and then, we will attempt to write the worst sports column on earth. Today: Let’s talk about LeBron James and a culture stuck in neutral.

MIAMI — LeBron James has impressed me plenty over the past few years, but not this week.

Did you hear the latest? This past weekend King James was going to see his buddy Jay Z at a rap concert, and he got stuck in horrible traffic. Even Kings struggle like the rest of us, right? Puhleeeeze. LeBron made a call, and within minutes this millionaire superstar had cop cars clearing traffic, and his chauffeur was speeding down the wrong side of the road. Headed the wrong direction, on the other side of the road, all the little people staring as he glided past. Funny, isn’t it?

Sometimes we write the metaphors, sometimes life writes ’em for us.

These are the times we live in, I guess. As LeBron narrates video of the incident on his Instagram account: “Light police escort on the wrong side of the street. Headed to the big homey [Jay Z] concert, JT. Holla.”

The video currently has more 86,000 “Likes” on the Internet.

Where I can press “Dislike”?

Because this just drives me crazy. We all need to pump the brakes.

Talk about a highway to hell.

Do people really think we need to be using public funds and valuable policemen to make sure LeBron James gets to a rap concert on time? And would we be doing this if Ray Allen hadn’t bailed out the Heat in the NBA Finals? I’m just clarifying. Does LeBron get special treatment because Ray saved his team, or just because he’s famous?

Well, I smell a rat.

This is part of a pattern with LeBron James. It started back in high school when he ignored the rules and bought himself a brand-new Hummer and nearly got himself disqualified from high school basketball. He qualified for financing because everyone knew he was going to be rich. He’s LeBron James. And now? Look at that, he qualifies for a police escort. If he’d asked the cops for a gun, he probably would’ve gotten that, too. Why? DUH!

While the rest of us are stuck in the emotional gridlock that comes with life in the 21st century, the MVP is sailing past us going 90 mph on the shoulder. The first rule of fight club is that laws don’t apply to LeBron James.

Just this month, LeBron was asked to report for jury duty in Ohio, and — shocker — he got sent home within an hour of showing up at the courthouse. Just this week, Sidney Crosby showed up at a crowded Pittsburgh DMV and walked straight to the front of the line. Must be nice. It probes at a deeper question, I think: Do athletes have responsibilities as citizens? Should we let these megastars reap all the benefits of America and get rich off the fans, but then never give back? Never have to wait in traffic like the rest of us? Is that a culture of accountability?

According to TMZ, the craziness started Friday because “Jay Z was refusing to start the concert without LeBron present, so police determined it was in everyone’s best interest to get LeBron there ASAP.”

To review: The police intervened because Jay Z wouldn’t perform without his best friend LeBron there to watch him. And this was considered a public service for the rest of us. What a country.

I was stuck in traffic Monday afternoon, and my mind drifted back to LeBron and this whole mess. I’m not going to sit here and bag on LeBron for getting this one wrong.

But LeBron’s gotta ask himself: Is this the man he wants to be?

Is this the example he wants to set for my nephews, who buy his jerseys and want to grow up to be just like him? The man who complains about all the attention he gets, then uses his fame to joyride down the wrong side of the street on the way to a rap concert? The man who skips out on jury duty, and then boasts on social media about his “24-hour DJ”?

If you think I’m being hard on him, then ask yourself: What would Michael Jordan say?

Would MJ be doing any of this? Did MJ need a 24-hour DJ to follow him around? Would MJ call for a police escort? If I remember correctly, MJ was too busy working on his game to worry about meeting musicians on time.

Here we are back in 2013, and everything’s filtered through social media and blogs and hashtags. Well, here’s my trending topic for today: It’s time for LeBron to take a long look in the mirror. Because now it counts. This offseason, after that second title, now we get to see the King embrace his role as the face of a generation. Ray Allen saved him from crashing and burning. Gave him a second chance, gave him the world. Now it’s up to LeBron to stay on the right track as he navigates life in the fast lane.

From where I sit? Friday night’s police-escort fiasco was a disappointing start. He didn’t want to let down Jay Z, so he let down the city of Miami instead. On the bright side, I guess we should at least be happy LeBron wasn’t driving himself.

We all know King James has trouble with the clutch.