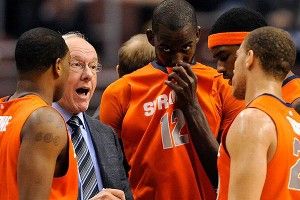 It’s a depressing time for people who love interesting basketball.

Last week, Ricky Rubio, the blossoming Spaniard who treated us to pinpoint passes and a haircut befitting every SXSW musician plinking a vintage Moog, was lost for the season with a shredded knee. Then, earlier this week, the clumsy butchers who run the New York Knicks organization sent Mike D’Antoni, the most prominent advocate of forward-thinking hoops, to the slaughterhouse. Unsurprisingly, D’Antoni’s departure delighted those legions of Red Deer Cave people who believe basketball in New York should always resemble a fight between furry mastodons. Extinguish your fire, Thag! Sun cook meat!

And to top it off, Fab Melo got suspended. There are no specifics, but it apparently has something to do with the same mysterious issue that sidelined him for several games earlier this year. What we do know is that his absence from the NCAA tournament will be devastating for not only for the Orange, but also for fans who enjoy watching uniquely weird athletes.

The monstrous Syracuse center was no shining exemplar for futuristic basketball, but he was immensely entertaining. In my debut Grantland column, in which I predicted the Orange would win the national title, I called the 7-foot center a “compelling option” for replacing Rick Jackson. Then I wrote that he had shown “inklings of competency” at the end of last season. Man, I underestimated that wonderful Brazilian.

The Orange’s 31-2 record was largely built on the effectiveness of their 2-3 zone defense, and Melo was the reason it worked. He swatted at every interior shot with elasticized abandon, soared toward the free throw stripe to disrupt shooters who were momentarily open, and had acquired a knack for drawing charges by abruptly freezing in front of driving opponents. Melo was also a bully with a mean streak, the lone enforcer on a team of flashy finesse players who would eagerly install a forearm in any foe’s chest. A week or so ago, he was deservedly named the Big East’s Defensive Player of the Year.

Melo never developed much of an offensive repertoire, but his struggles on that end just made him more fun to watch. Whenever he dropped passes, found himself trapped beneath the rim or heaved up ill-advised bricks from the perimeter, it was part of the Fab Melo Experience. It’s so rare to find an athlete who is both valuable and a frequent source of comedy.

I’ve been writing about Melo in past tense because I doubt we’ll see him play for the Orange again. Given his tumultuous season and apparent distaste for even minor inconveniences of academia, any silver-tongued agent could convince him to forgo his junior season in favor of being selected at the end of the first round by the Miami Heat.

The way it’s looking now, Syracuse could enter next year with four new starters. Besides losing codgers Kris Joseph and Scoop Jardine to graduation, sophomore Dion Waiters will probably opt for the NBA, too. Waiters is the sixth man, but he’s been the team’s best player for most of the season, a fact underscored by two explosive games in the Big East tournament. The bulky combo guard rang up 18 points against UConn and then dumped in 28 during the loss to Cincinnati. It’s unclear if Waiters is suited for either guard position in the pros, but he seems destined for that “whatever James Harden is” slot.

With the NCAA tournament the last hurrah for this familiar group, it’s particularly disheartening that its fate will be decided without a key contributor. And for anyone who watched the Orange play against Notre Dame without Melo, the memory of paunchy Irish dudes bulling to the basket as if it were a bar pouring free Harp is unshakable. The East Region alone is terrifying. Kansas State cleans the offensive glass ferociously, Wisconsin drains the air out of the ball (all season, Syracuse has struggled in half-court sets against deliberate teams), and Ohio State, Florida State, and Cincinnati offer brutes who will gorge on the Orange’s soft midsection. Rakeem Christmas and C.J. Fair are nice assets, but they’re not built for keeping Bernard “Man Strength” James away from the rim.

At best, Syracuse makes it to the round of 32.

JUST KIDDING. WE RIDING THIS ONE OUT. FUCK IT, DOG, LIFE’S A RISK.

Only a master tactician like Syracuse coach Jim Boeheim could put on his robe and wizard hat and conjure up a way to turn a top-seeded team into a sad-sack underdog. The suspension of Melo, when coupled with the Orange’s loss in the Big East tournament semifinals, makes a trip to the Elite Eight seem like a successful run for a team that was ranked in the top five all season long. It’s brilliant.

But seriously, even missing their center, this is a talented group. The Orange still have two guys projected to be taken in the first round of the NBA draft, a luxurious amount of depth, and the advantage of encountering teams who haven’t had much opportunity to prepare for their 2-3 zone. Besides, this moment could inspire Rakeem Christmas to step into the void and become the team’s new big man with an amazing name.