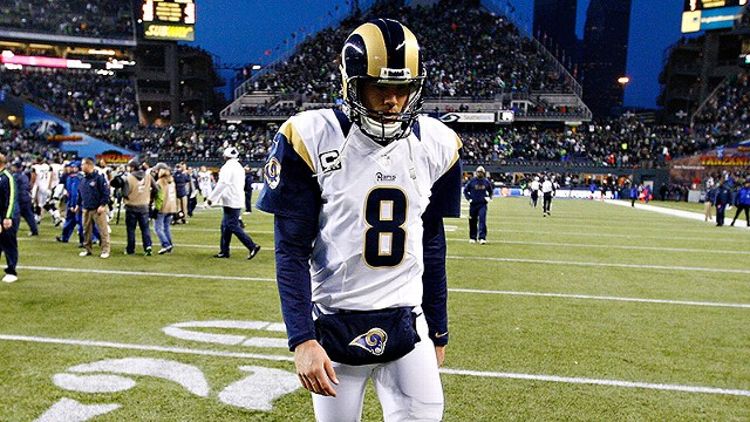 Among Rams fans, the Greatest Show on Turf has that cursed way of feeling both a moment and a lifetime ago. It doesn’t feel like the days of Marshall Faulk and Kurt Warner have been gone that long, but we’re now 11 years removed from St. Louis’ trip to Super Bowl XXXVI. The last piece of that offense, Torry Holt, left the franchise five whole seasons ago.

There are some positions where the Rams found adequate replacements for the borderline Hall of Famers they lost. Marc Bulger went to the Pro Bowl in his first (mostly) full season as a starter, throwing for more than 3,800 yards and 22 touchdowns for a Rams team that made the playoffs in 2003. St. Louis prepared for Faulk’s exit by drafting Steven Jackson, whose streak of 1,000-yard seasons started in 2005 and hasn’t stopped yet.

Wide receiver, though, was a different story. Having shared an era with both Randy Moss and Terrell Owens, Torry Holt and his career accomplishments can occasionally be overshadowed. Starting in 2000, Holt put together eight straight seasons of at least 1,180 yards, including six of at least 1,300 and two of more than 1,600. Four years his senior, Isaac Bruce never replicated Holt’s production during that stretch, but he was a 1,000-yard receiver for each of those Greatest Show on Turf years. But as Jackson and Bulger guided St. Louis out of the Warner-Faulk era, the Rams have yet to find anyone even approaching a game-changing wide receiver.

Sensing the end for both Holt and Bruce, the Rams drafted Donnie Avery in the second round of the 2008 NFL Draft. Avery followed a strong rookie season with a middling sophomore one, and in his third year — the one historically considered the breakout one for most receivers — Avery was carted off the field with a preseason knee injury. He missed all of the 2010 season and was released the following year.

Previous Don’t F*$% This Up Entries

St. Louis spent the 2010 and 2011 drafts looking for receiver help in the middle rounds. Cincinnati wide receiver Mardy Gilyard, fresh off a trip to the Sugar Bowl in the school’s best season ever, was the first pick of the fourth round in 2010. He never caught a pass as a Ram. The next season, the Rams spent three of their first four picks on weapons for Sam Bradford. Tight end Lance Kendricks, picked in the second round out of Wisconsin, has 861 yards in two seasons, and considering the Rams’ first signing last month was an athletic, pass-catching tight end, their feelings about Kendricks are pretty clear. Following Kendricks were two wide receivers — Austin Pettis in the third round and Greg Salas in the fourth. Pettis has 57 catches in two seasons; Salas was traded to New England a year after being drafted.

That brings us to last season, when the men who made up Bradford’s cast are the same ones who were in play at the start of this offseason. (Quick side note: Danario Alexander, who went undrafted in 2009, had two injury-plagued seasons in St. Louis before totaling 658 yards and seven touchdowns in just seven starts with San Diego this year. Considering both his history of injuries in college and his inability to stay healthy while in St. Louis, even if he does turn into a productive player, it’s hard to fault the Rams for cutting ties.) The Rams once again spent two draft picks last offseason on wide receivers, but in their first season, it was the lower pick who showed the most promise. Chris Givens, drafted in the fourth round out of Wake Forest, showed off his ability as a deep threat often enough to pull in 42 catches for 698 yards — good for more than 16.5 yards per reception. His production is likely a part of why St. Louis felt comfortable letting Brandon Gibson, who led the team with five touchdown receptions a year ago, walk in free agency.

To go along with Givens, St. Louis took Appalachian State receiver Brian Quick in the second round. We’ll get back to Quick, but first, let’s talk about Danny Amendola. Amendola has a familiar NFL backstory, mostly because it resembles Wes Welker’s — in almost every way. Amendola was a historically prolific receiver during this time at Texas Tech, even shattering many of the records Welker set in his time there. When it came time for the NFL draft, no one had any interest in the system-based marvel, and seven rounds went by without a call. Like Welker, Amendola signed as an undrafted free agent. But unlike Welker, as Bill Barnwell wrote two weeks ago, Amendola was productive almost immediately. In 2010, his second season, Amendola led the Rams with 85 catches and 689 yards.

In only 11 games last year, Amendola nearly matched his 2010 totals for yards and touchdowns, but that’s the problem — he only played 11 games. After missing almost all of the 2011 season with a torn triceps, Amendola suffered a dislocated elbow in week five against the Cardinals. When Amendola became a free agent at the end of the season, the Rams were faced with the decision of whether to pay up, despite Amendola’s injury history. In the end, they decided against it, using their money to bring in both Jake Long and Jared Cook and letting Amendola go to New England on a five-year, $31 million deal ($10 million of which is guaranteed).

Long, whose courting process by the Rams included more than one marathon physical, comes at a position of need and could be a solid buy-low opportunity for the Rams, but he only solves one of Sam Bradford’s problems. St. Louis let their top two receiving options walk from an offense that wasn’t exactly explosive with them. That, they have to hope, is where Brian Quick comes in. The 6-foot-3, 220-pound Quick certainly looks the part, but his production matched neither his physique nor his draft status last season.

With the free-agent options pretty much gone, St. Louis’ best hope of finding a difference maker on the outside will come in the draft. Picking 16th and 22nd overall, the Rams will likely have plenty of options. One player that would seem to make sense, given Amendola’s departure, is West Virginia wide receiver Tavon Austin. Austin can play out of the slot and likely translates to a Percy Harvin–type talent in the NFL. He tore up his 40 and the receiving drills at the combine, and if St. Louis is interested, the only problem might be that Austin has played himself into the first half of the first round. The next-best option is probably Tennessee wide receiver Cordarrelle Patterson, who played only one year of major college football but was dynamic in his time there. The 6-foot-2, 220-pound Patterson can really move, and along with Givens, he could give Bradford two game-changing looks on the outside.

Whoever it is, whether it’s Austin, Patterson, or someone else (Keenan Allen, DeAndre Hopkins, Justin Hunter, or Robert Woods), the Rams would be well-served trying to surround Bradford with as much talent as possible. With Bradford entering his fourth season as a starter (and fast approaching contract time), it’s soon going to be time for St. Louis to figure out whether he’s their answer moving forward. At this point, pointing to his dearth of weapons has been an acceptable excuse. It’s time for the Rams to make it an unacceptable one.