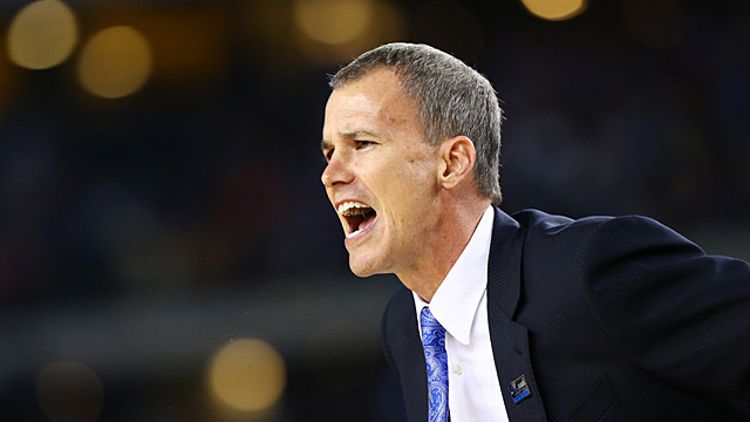 To paraphrase Chris Rock, desperation is the worst cologne. And when it comes to the post–NCAA tournament coaching carousel, the landscape of college basketball feels cloaked by a cloud of metaphysical Drakkar Noir. The absurd time crunch and constant influx of hot new names on a daily basis make the whole process feel less like a protracted mating dance than an outwardly raging, inwardly fraught frat party, with nothing but overeager overtures and the progressive, unmistakable lowering of standards as the night continues.

It’s nearly impossible to look cool in these situations, but somehow, USC has done it. Now, we could just flat-out admit that Andy Enfield was a mortal lock for the Trojans all along — as a guy who achieved his life ambitions of “totally killing it” in the tech and finance games and marrying a Maxim cover girl, he was already a role model for the USC student body even before anyone knew he coached basketball. But as everyone from Old Dominion to Minnesota made eyes at Enfield over the past couple weeks, USC came out of nowhere on Monday night and pulled an “Is That Yo Chick?” move. Who cares if Enfield is grabbing this job off the back of just two wins, or that USC’s basketball team is on probation as often as Gucci Mane? They look cool, unlike these five programs who might need to hire Phil Jackson to counteract the effects of a coaching search that reeks of desperation.

Seems like every year, there’s a dubious if not outright devious coaching hire of a guy who has no real experience or success as a coach, but has a suspiciously buddy-buddy relationship with certain recruits or AAU programs. I was sorta hoping that Drake would’ve been the school to take a chance on that guy. Competing in the Missouri Valley Conference is no joke, and it needs every edge it can get. And it’s got the biggest one imaginable — it shares a name with the biggest rapper out right now. If you don’t think an even remotely with-it coach could steer a blue-chip recruit to Des Moines for the mere chance to rep Drizzy and maybe make some March’s Own T-shirts, well, you don’t remember how dumb and impulsive 18-year-olds are.

Instead, Drake started from the bottom, and now it’s here. Which is to say, still at the bottom. That’s what you get for hiring not only a retread, but a retread whose major accomplishment as a head coach appears was being lucky enough to cross paths with Andrew Bogut before sending Utah into one of college basketball’s most stunning tailspins. Plus, Ray Giacoletti is probably the kind of nerd who thought “Proud of You” was the dopest track on Take Care.

New Mexico’s desperation isn’t one born of being on the prowl as much as one of realizing you’re better off not being on the prowl. Even if UCLA’s hire of Steve Alford took most people by surprise, New Mexico at least appears to have a great contingency plan in assistant coach Craig Neal. He played an enormous role in recruiting (to the point where not hiring him would all but have guaranteed major transfers), he knows the system, the fans want him, he wants the job, and he’d been a candidate for the Georgia Tech gig at one point, so he’s not some geek off the street.

This should be a done deal, and yet New Mexico appears to be every bit as impressed with the mere accomplishment of getting a no. 3 seed as UCLA; right now, it’s essentially saying “Programs like New Mexico don’t hire their own assistants.” Cold feet, false bravado, whatever.

Let’s digress for a moment and refer to a sort of management philosophy I attribute to the Philadelphia Flyers teams of the 2000s. By and large, they were never great, though they could always manage a decent playoff run like any NHL team competent enough to make the postseason. And regardless of the long-term implications, they always did their part to keep the fans engaged as they correctly figured that the peak of casual NHL fandom occurred in the mid-’90s when the NBA and MLB went on strike and Electronic Arts was cranking out one classic after another, resulting in a large group of people who may have never heard of Gordie Howe or didn’t understand how icing worked but were inordinately excited about the likes of Steve Larmer and Alexei Zhamnov.

Anyway, while seemingly none of these Flyers teams were equipped to win a Stanley Cup … come on … Jeremy Roenick!? Eric Weinrich!? Sean Burke!? Keith Primeau!? Tony Amonte!? You can’t put a price on name recognition when the commitment of the casual fan is in question.

Texas Tech may initially appear to be the “winner” of the offseason thus far by hiring Tubby Smith. But even before you ask yourself why you’d want a 61-year-old coach coming off a listless tenure at Minnesota, look at the last couple of big names who helmed the bench in Lubbock. Bobby Knight, Pat Knight, Billy Gillespie. This isn’t a job for a rebuilder, this is a job for a guy with a hazmat suit.

Once again, this is done with the casual fan in mind. If you’re the type who pays attention to college basketball enough to fill out a bracket but not to the point where you can answer more than two follow-up questions regarding your rationale, the ODU opening is a curious one. For one thing, as recently as 2011, ODU was a reliable upset pick. In 2012, it took only a minor step back, going 22-14 with a CIT or CBI berth, whichever one results in the winner getting a Buffalo Wild Wings gift certificate (not redeemable for alcohol or dessert).

You figure if it’s looking for a new coach, it’d be because Blaine Taylor had inevitably jumped to whichever BCS bottom-feeder had just sacked its leader. And this was shaping up to be an odd year for ODU anyway: It wasn’t eligible for the CAA tourney since it was moving to Conference USA and an at-large bid was all but forfeited after an early slump. Still, it appeared to be a program in solid shape, maybe a B-level VCU that could withstand a tough season or two. How bad could one year be?

Pretty damn bad, to the tune of 5-25, though 40 percent of those wins were notable — one was a two-point win against ACC punching bag Virginia that may have single-handedly kept the Cavaliers out of the tournament. And the other was a parting gift to regular-season CAA champ Northeastern. That said, no team goes 5-25 without some kind of cataclysmic event or irreparable structural damage known only to the homeowner, so fair play on ODU’s part. I mean, you don’t show up to the post-Memphis Conference USA with any old coach, right?

But this is more for prospective desperation; on March 14, Old Dominion contacted Florida Gulf Coast’s Andy Enfield via Skype … because … I suppose Snapchat was a little too informal. To put things in perspective, FGCU beat Georgetown on March 22. Now that Enfield’s been hired by USC, I just hope he does the most L.A. douche-bag thing imaginable and releases his phone records from the past two weeks to reveal just how often ODU called. It’s probably Mikey from Swingers times a thousand. Hey, speaking of which …

Minnesota’s a nice gig. Big Ten school, not in the middle of nowhere, and with a football program trapped under the glass ceiling of the Music City Bowl, it’s not a Penn State or Nebraska situation where even acknowledging the existence of a men’s basketball team feels like an attempt to make a tectonic shift in the culture. And moreover, the Gophers have experienced recent success. Are they ever a threat for an NCAA title? No, but they certainly won’t embarrass the conference in the ACC—Big Ten challenge, and they’ll be in the hunt for a decent tournament seed, provided they pull off their typical 20-12-ish sort of year. It’s a job that should attract quality candidates.

But in the current state, where it’s the top job available? You start to realize not being overtly bad isn’t the same as being attractive — even eschewing the racial implications of the “Great White North,” the Timberwolves have proven paying people literally millions of dollars to play basketball in Minnesota is a tough sell. And yet, by being located in Minneapolis, UM is the most “urban” of the Big Ten schools and has the least enthusiastic campus culture. And quick, who are the most successful Golden Gophers on the pro level? I bet you panicked and immediately shouted out “Voshon Lenard.”

Unfortunately, the Gophers’ desperation is one that a lot of people can empathize with, stuck in this strange limbo where even the slightest misalignment between expectations and reality only lead to disappointment — it’s not a destination job, but it’s hard to imagine it being a stepping stone to something bigger. For one thing, it hasn’t been for the likes of Dan Monson and Tubby Smith. Shaka Smart, Andy Enfield, Gregg Marshall, and … um … Flip Saunders … what’s in it for them? Well, the ability to use the Gophers as leverage for higher salary demands. But otherwise, let’s just hope that Minnesota realizes it’s a two-way street and that someone just as desperate will put their name out there soon enough. I mean, Isiah Thomas has been awfully quiet this past couple of weeks.