Hey, Don’t F*$% This Up: Phil Loadholt and the Minnesota Vikings’ Offensive Line 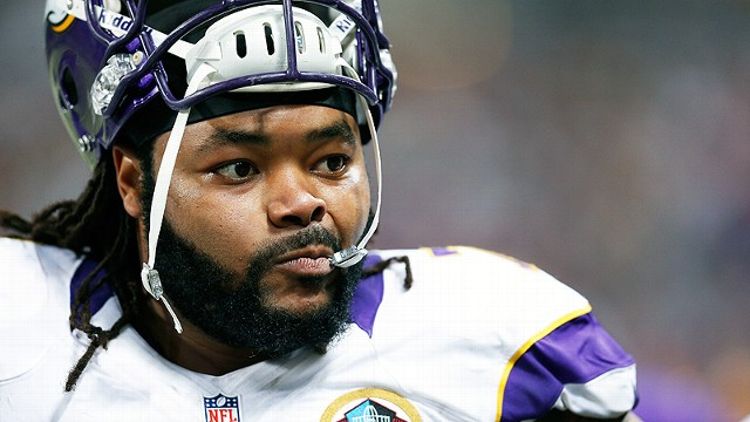 With free agency and the draft process revving up, there are plenty of questions for every NFL team. But for most, there’s one issue that trumps the rest. This is the first in a team-by-team look at the offseason tasks that just can’t get botched.

There’s higher-profile news in Minnesota at the moment, but amid all the Percy Harvin drama is a lingering question that threatens the Vikings’ very foundation. There’s no actual proof that Adrian Peterson can be killed by conventional weapons, but his post-human season is at least partially (partially!) a result of running behind of the league’s best offensive lines.

Matt Kalil — whom Minnesota took fourth overall last year, was a Pro Bowler in his first season, and seems to be a big draft-day win — will likely be the group’s biggest name going forward, but while he may turn into one of the league’s best offensive tackles, his teammate two spots over is already one of its best centers. John Sullivan’s +27.3 grade according to Pro Football Focus is the best among centers, and his play is the biggest factor in Minnesota finishing ninth among the league’s offensive lines.

Sullivan had microfracture surgery following the season, but he’s expected to be ready within three to four months. At 27 years old, and with four years left on his contact, he and Kalil are set to be fixtures along Minnesota’s line for a long time. Where the uncertainty arises is on the other side of Kalil. With his rookie contract over, fifth-year, mountain-of-a-right-tackle Phil Loadholt is in line to get paiddd.

When he was coming out of Oklahoma in 2009, the book on Loadholt was that although he might struggle in pass protection, his 6-foot-8, 350-pound frame made him an ideal fit as a road-grading right tackle. Since the Vikings took him in the second half of the second round, the latter has proven to be true while the former hasn’t been as much of a concern as originally thought. Pro Football Focus graded Loadholt as the 20th-best pass-blocking tackle in football, and according to Football Outsiders, Minnesota was fifth in PFF’s adjusted line yards metric on runs over right tackle (their best among the five designated run locations). Among its best available free-agent tackles, Pro Football Focus has Loadholt fifth.

If fancy numbers aren’t enough (and let’s be honest, they aren’t to be trusted), Peterson’s opinion probably should be. According to the St. Paul Pioneer Press, Peterson plans on talking to Vikings management about bringing his big right tackle back. My understanding is that in addition to being the overlord of an entire planet in the Andromeda Galaxy, Peterson has also become the de facto governor of Minnesota. If those powers extend to Vikings personnel decisions, any of these concerns about losing Loadholt might be moot. I’m still waiting to hear back on that, though.

Minnesota has $16.1 million in cap room heading into the offseason. The specter of a new Percy Harvin contract looms, but with rumors about a falling-out between him and Leslie Frazier pushing the Vikings to look into dealing him, that may ease their financial burden. Either way, allocating a chunk of that money toward a new contract for Loadholt doesn’t seem very controversial. With the uncertainty surrounding Christian Ponder’s viability as a starter, Peterson will be Minnesota’s offense until further notice. Maintaining the strength of his offensive line on both ends and in the middle is in the best interest of everyone involved.

Where things get dicey is next to Loadholt on that offensive line. When the Vikings signed Geoff Schwartz last offseason, the idea was that the fourth-year pro would give them some depth at tackle behind Kalil and Loadholt. What developed was a position battle between Schwartz and projected starter Brandon Fusco at right guard. For the second straight year, Schwartz’s offseason involved some injury issues, and by the opening day, it was Fusco who got the nod.

Schwartz was used as part of a rotation with Fusco for the rest of the season, but the thing is, it was Schwartz who proved to be the more effective player in his limited role. His 182 snaps is a small sample size compared to others on the list, but PFF has Schwartz and his +6.4 grade as the seventh-best among available guards while Fusco finished the season in the negatives.

Schwartz has already made it clear that at his next stop, he wants to start. There are plenty of teams who could use an upgrade at guard, and because Schwartz figures to be a starting-caliber player who can be had for a reasonable price, there will likely be several suitors. The question the Vikings have to ask is whether they’re one of those teams. Fusco is a sixth-round pick in the third year of a sixth-round contract. Considering the lack of money prescribed to the position, signing a player familiar with the system and its players could play a role in allowing the Vikings to add to what’s already one of their biggest strengths.