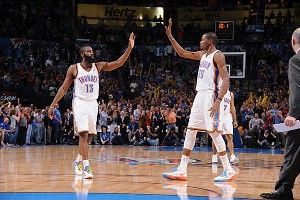 I will always look back on May 1, 2012, as the day 90 percent of my brain power was spent thinking about Kate Upton. First, there was the sequel to her Dougie performance, the “Cat Daddy.” [Ed. note: Google it yourself, guys.] And then, thinking nothing could top that until Christmas, she decided to do a commercial with James Harden and Kevin Durant. Can’t make that up.


The commercial is pretty great, (1) because it shows Upton being a surprisingly decent “actress,” and (2) because we get to see the flirting styles of teammates Durant and Harden. While this is a staged commercial, there’s no way these two weren’t competing for her attention. Impossible. Here’s how it played out.

1. The Introduction
Durant: Shakes Kate’s hand like a business associate, and then leans forward like he’s never talked to a 19-year-old girl before. Also, he says, “Kevin, nice to meet you.” Durant, please unfuneral your swag, immediately.

Harden: Doesn’t introduce himself, but instead gives her the no-look pound. Nice.

3. The Confessional
Harden and Durant give their thoughts on Kate, while she’s gone:

Durant: “That’s a really, really nice way to put it. She looks really good, though.”

4. The Jump Rope Contest
Kate starts counting out loud while our suitors jump rope. After getting to six, Harden yells, “Count in your head!” But then, perhaps realizing that he’s down 2-1 and that he may have come off a little too aggressive, he follows with “please.” And she listens. Nice, James. And then to finish out what he started, Harden jump ropes longer than Durant. This was a huge round for Harden. Tie game, gentlemen.

5. The Massage Room
I didn’t expect this, but we now have a third suitor. His name: Jim Beezy, the masseuse. Fortunately for James and Kevin, he not only has no interest in Kate, but would actually prefer that she left. In his eyes, she’s distracting the players. After Kevin and James show their allegiance to Jim Beezy, Ms. Upton walks out of the room. It’s a very jealous storm-out, if you watch carefully. This is interesting. Maybe Jim Beezy is less suitor and more competition for Kate. Wait, did Jim Beezy just turn this competition on its head? Is it less “Which Thunder player will Kate choose?” and more “Will either Thunder player choose Kate, or is it all about Jim Beezy?” Wow. Didn’t see this coming.

6. FINAL ROUND: The Photo Shoot
Potentially sensing that she was losing her men, she did what any Sports Illustrated swimsuit cover model would do: She brought them to a photo shoot. To be expected, both are behaving like giddy little boys, and (most important — to Kate) Jim Beezy is nowhere to be found.

In this final bout, Harden takes an early lead, touching Kate’s elbow and wrist while Durant is busy arguing with the photographer. A few seconds later, Kevin storms back by boxing out the photographer (veteran move), throwing an arm around Kate, and asking the photographer to take a picture, all while Harden had stepped aside. James, sensing this photographer was just ruining everything, takes his glasses, but this doesn’t really get him any closer to Kate. Neither does Durant’s taking of the photographer’s camera to snap a shot of Kate’s face. After a few seconds of frantic man scrambling, it all came down to one final photo:

The winner: NEITHER OF THESE DUDES.

Yes, there are a few more outtakes at the end of the video, but this image is all that I need to see. With this final pose, they both blew it, legendarily.

For one thing, the battle of “thumbs-up” vs. “bunny ears” is one that should be saved for non–Kate Upton related activities. Second, what about Kate Upton screams “Let me wear my favorite screen-printed T-shirt?” I know this was an advertisement spot for Skullcandy, but this controlled environment could have easily been a launching point for one of these two to be the Andy Roddick to her Brooklyn Decker. An Upton-Thunder couple would have taken the Midwest by storm. This could have been huge, but alas, these two nerds decided on this for a lasting impression with Kate. And that expression on Kate’s face says it all. It screams, “Why did I ever let them take off their uniforms?” Poor Kate. Life is hard.

But at least Russell Westbrook wasn’t there. He probably would have stood in front of Kate, complained that she was getting too much attention, and then gone 9-for-31 from the field.

An Obituary for the Lockout-Shortened Season