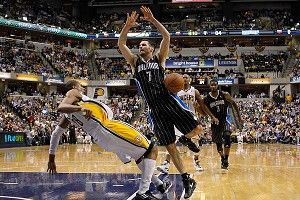 Absent from that list of moments are just two first-round series — Spurs-Jazz and Pacers-Magic. And while the Utah–San Antonio series features a guy whose nickname is “The Big Fundamental” and a team from a place where liquor laws basically make it almost impossible for residents to get drunk, the fact that Indiana and Orlando have zero combined NBA championships and zero combined household names on their playoff rosters is why it is likely the first-round series that NBA fans care about the least.

Because the Pacers-Magic series doesn’t exactly demand your attention and because they played Monday night at the same time as the Heat and Knicks (and they played on NBA TV no less), my guess is that only 12 people watched Game 2 between Indiana and Orlando.

Luckily for you, I was one of those 12, and I’m here to give you an idea of what you missed by pointing out seven things I noticed while watching.

1. The Pacers crowd was virtually nonexistent.
This was a bit surprising to me, considering Indianapolis is a small-market packed with passionate basketball fans and the Pacers are the second-best team in the East now that Rose is out for the playoffs. Based on that and the fact that Monday night’s game was a must-win, I fully expected the Pacers fans to be decked out in blue and gold and on their feet making noise for most of the game. Instead, the only guy who seemed to really be getting into things was that curly-haired dude who wears a construction hat, sits by one of the baskets, and holds up his terrible signs that say things like, “If the house is a rockin’, don’t bother knockin’!”

I don’t want to offend you or anything, Pacers fans, but the fact of the matter is that even the Heat fans are putting forth a better playoff effort than you right now.

2. The “oooooh” thing that fans do for guys with the “ew” sound in their name has run its course.
Thanks to NBA fans all over the country chanting “M-V-P!” whenever their team’s best player goes to the free throw line, regardless of whether that player has ever won or even been close to winning an MVP, the “oooooh” thing has been overshadowed as one of the most annoying fan trends in sports. But the way I see it, it’s even more annoying than the “M-V-P!” chant because it happens every single time the guy with the “ew” sound in his name does pretty much anything.

Like they’ve done all season, Pacers fans last night unleashed a “Looooouuuuuu” when Lou Amundson checked into the game, when he made each of his two free throws, and even when he adjusted his ponytail. I guess it was encouraging to see the Pacers fans actually come to life when Amundson went into the game, but after hearing Packers fans for the last few years yell “Kuuuuuhhhhnnn” every time John Kuhn carried the ball for a one-yard gain, I’m burned out on the “oooooh” thing and hopes it goes away sooooooon.

3. The Magic are more fun to watch without Dwight Howard.
I know Howard rubs a lot of people the wrong way for whatever reason, but my opinion has nothing to do with his antics or his incessant desire to get everyone to marvel at his physique. It has to do with the fact that without a true post presence, the Magic spread the floor and shoot an absurd amount of 3s.

Now, the Magic shot an absurd amount of 3s even when Howard was in the lineup, but now that he’s out with a back injury, instead of playing the inside-out game and getting open perimeter looks off opponents doubling Howard, they are getting open looks by putting all five guys around the 3-point line, setting a ton of ball screens at the top of the key, and either playing one-on-one or penetrating and kicking. In other words, they are playing exactly like I do in every pickup game I’ve ever played in, which might not be the greatest strategy to use to win championships but is certainly fun to watch.

4. I wish there were a way to watch the same halftime shows as the people in the arena.
I know that halftime shows at sporting events are typically exciting for the first 10 seconds and then quickly become boring, especially if they involve fans competing against one another to win a $500 gift certificate to Chili’s. But while Glen Davis was getting interviewed at halftime Monday night, a group of athletic, gymnast-looking guys were setting up mats, trampolines, and some ropes on the court in the background. Based on that description, I ask you this: Would you rather watch Vince Cellini, Dennis Scott, and Brent Barry sit at a desk and talk about basketball during the halftime break or see what all of those trampolines, mats, and ropes were for?

5. The Pacers are essentially a really good mid-major college team
Seemingly every year in the NCAA tournament, there’s a fourth-seeded mid-major team that comes into the tourney with something like a 28-3 record and inevitably ruins my bracket because I either foolishly underestimate it or I put way too much confidence in this team full of nobodies. This sentiment perfectly describes this Pacers team. As an Indianapolis native and fair-weather Pacers fan, it terrifies me that they don’t have a go-to guy to give the ball to in big moments, because of instances like the Game 1 loss to the Magic, when the Pacers failed to score in the final four minutes. And yet, the fact that they don’t have a guy whose jersey is being bought by anybody outside the state of Indiana — and therefore they play well together because they don’t have any egos on the team — is the big reason why this is my favorite Pacers team since the 1998 squad that all shaved their heads, and it wouldn’t surprise me one bit if they made a deep playoff run.

(Speaking of which, here’s an article from 1998 about that Pacers team and, more importantly, how much cooler black guys look with shaved heads than white guys. I’ll give you one guess as to who wrote such a thing.)

6. J.J. Redick’s flashes of brilliance make me miss Adam Morrison.
For the unaware, long before the storied bench-warming rivalry between Morrison and Brian “White Mamba” Scalabrine, Morrison had somewhat of a rivalry in college with Redick in the sense that they were by far the two best players in the country in 2006, and a season-long debate ensued over who was better. Redick ended up winning most of the National Player of the Year awards, probably because he played in the tougher conference and his team was better, but I was always a die-hard supporter of Team Morrison because Redick didn’t have a trashy mustache and long, unkempt hair.

Anyway, Redick didn’t exactly have a great game Monday night, but during a stretch at the start of the fourth quarter he momentarily looked like the Duke version of himself, as he scored three straight baskets for the Magic including his only 3-pointer of the night. And as this was happening, I said the same thing that I’ve always said while watching J.J. Redick play: “Impressive, but needs more mustache.”

7. I have no shame in admitting that I completely forgot that Roy Hibbert was an All-Star this year.
Adam Morrison can’t even get on an NBA roster in the same year that the league has the worst teams of all time and considers Roy Hibbert to be one of the 25 best players? I’m not sure what to believe in anymore.