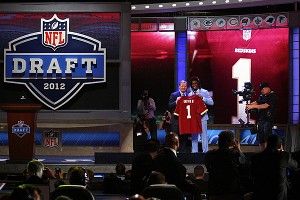 The 2012 NFL draft is in the books, and already Vegas has posted propositions related to this year’s picks. I’m lying. They haven’t. But I have. So shake loose some fake jermajesties from your fake wallet and let’s have some fake fun with these.

Over/under 3.5 plays into Andrew Luck’s first game before the network shows a graphic comparing his stats to Peyton Manning’s at the same point in his career
I’ll say under. Looking forward to seeing whether Luck ’12 or Manning ’98 recorded a faster jog out of the tunnel during their inaugural pregame introduction.

750/1 odds that Dolphins minority owner Fergie can name her team’s first-round draft pick.
The people of South Beach have yet another reason to be excited. This Ryan Tannehill kid has the potential to put up numbers ranging anywhere from those of the 2004 Sage Rosenfels to those of 2005 Sage Rosenfels.

8.5 on a scale of 1 to 10 of how much guilt the Patriots feel for actually having used their draft picks this year
The Pats are like your old social studies teacher who over 30 years accumulated a shitload of sick days, never used any of them, and then went out and videotaped the other team’s signals while banging one of the hottest models on the planet. Remember that dude?

1/3 odds that during contract negotiations Rams second-round draft pick Janoris Jenkins demands that one of these be installed in the team locker room
We’ll know he got his wish if the average Rams offensive lineman suddenly goes up by 30 pounds during the offseason.

2012 INTs for Cowboys CB Morris Claiborne vs. his Wonderlic test score
That prop would probably get you around even odds as the number, sadly, is only 4. As a die-hard Cowboys fan I’m praying this guy becomes the next Deion Sanders. What the hell — I’ll even take the part where he tweets a picture of his sons filling out a police report against their mother.

Over/under 38 percent decrease in concussions if the NFL replaced the standard helmet with prototype molds of Mel Kiper Jr.’s hair
I say this goes way over. Mel — you have the next 360 days off. I urge you to use them to figure out a way to get this done.

Over/under 1.5 on a scale of 1 to 10 in the pantheon of vintage Jets fans’ reactions to the announcement of their first-round draft pick

125/1 odds Kirk Cousins ends up starting more career games for the Redskins than Robert Griffin III
Let’s face it, Robert Griffin IV has a better shot of starting over Cousins. In Washington’s defense, they probably drafted two guys at the same position so Griffin doesn’t suffer from only-quarterback syndrome. The last thing the Skins need is for their signal caller to grow up to be maladjusted due to excessive pampering.

Over/under $35,000,000 that the Redskins will earn off the brilliant idea I just came up with … the RG 3D.
I have no idea what the hell this could be, but I’m starting production on special glasses first thing tomorrow. Who’s in?

4/1 odds Rutgers WR Mohamed Sanu gets an endorsement deal from AT&T after receiving a prank call from someone who claimed to be a member of the Bengals staff just before it was Cincinnati’s turn to make their first-round pick
This is going to end up being my favorite 30 for 30 ever. The Bengals eventually drafted Sanu for real, and I don’t know who the devious scoundrel who made this phony call is, but I can tell him this: If Crank Yankers ever comes back on the air, I promise you will get your own puppet.

12/1 odds Mr. Irrelevant (Chandler Harnish) ends up having a Baby Irrelevant with this woman

If I were the Colts and I saw that a woman put out a video offering sex with Mr. Irrelevant, I would’ve purposely used my last pick to draft a 500-pound half-witted high school janitor from Alabama and then hold this lunatic hussy to her word.

One more thing: NFL teams weren’t the only ones trying to give away jobs this week. Check out my latest prank that aired on Jimmy Kimmel Live involving me working at a temp employment agency.

Rest assured — Jason eventually got a job. The real headhunter he saw after me was enamored with his charm as well as the fact that other employees have a zero percent chance of ever catching germs from his beautiful bald head.