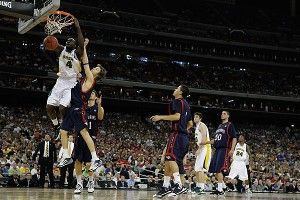 WATCH OUT FOR THE AUSTRALIANS, PURDUE.

That’s really all I’ve got. For more information on the 7th-seeded Gaels of Saint Mary’s, please see Shane Ryan’s mid-major primer from earlier this season. Take it away, Ryan:

Coming into the season, there were two things I vaguely remembered about Saint Mary’s:

1. For whatever reason, they have a lot of players from Australia.

2. They have that scruffy guy with the scariest/greatest mouth guard in the history of the game.

I enjoyed these eccentric facts, and I’m happy to report that both are still true. Four players on Saint Mary’s roster, including two starters, hail from the land where women glow and men plunder. And junior point guard Matthew Dellavedova, himself an Aussie, is leading the team in scoring while still wearing the famous mouth guard.

This has been your mid-major primer on the Saint Mary’s Gaels. Thanks for reading, and have a great weekend!

Hey, I was totally kidding about being done. Ha! Come on, you crazy readers, get back here. There’s wayyyy more to cover.