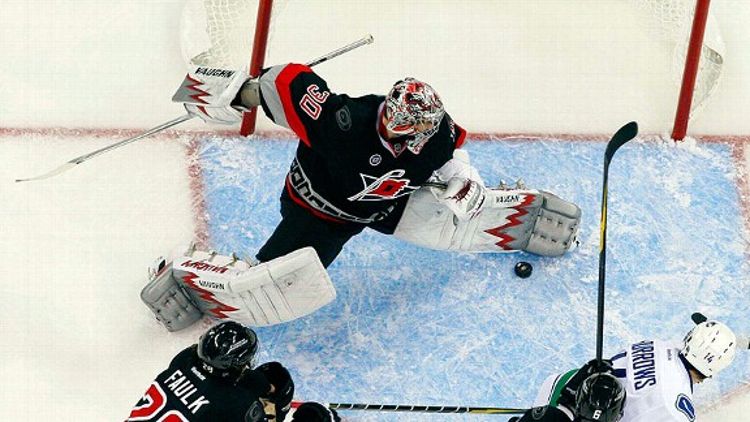 No one has faced more shots this year than Cam Ward. In his seventh season with the Carolina Hurricanes, Ward, who writes “Have Fun” on all of his sticks, is adjusting to the new realities of his team, one of which is this: The Hurricanes give up the most shots on goal of all 30 NHL teams. Ward has, unsurprisingly, had a tough season in this environment, and it’s beginning to show.

After being beaten in overtime by the Maple Leafs, Ward two-hand Hulk-smashed his stick against the goalpost in frustration. (It was a move he’d clearly had on the mind: One game earlier, against Winnipeg, Ward was yanked for the second time in three games and sat on the bench screaming. “I was absolutely not directing it at anybody,” he later said. “I was thinking about smashing the stick but didn’t do that. I just started yelling.”)

Maybe the outbursts were cathartic. Ward stopped 33 shots against the Vancouver Canucks on Thursday and Carolina managed to edge the defending Western Conference champions. Ward’s glove grab on Vancouver’s Keith Ballard preserved Carolina’s 4-3 win, and what’s more, it wasn’t even his only highlight-reel work of the night.

In other nets around the nation:

Flyers goaltender Ilya Bryzgalov was the undisputed first star of the premiere of 24/7. While his ramblings on the universe (“the solar system is soooo humongous big, right?”) and his warnings about killing tigers in China were crowd-pleasers, my personal favorite was when he was discussing all the things people warned him about Philly over the summer. Because “It’s a miserable market for a goalie” needs to be the title of a Bryz book one day.

The St. Louis Blues’ goalie Brian Elliott continues to have an incredible year. You think he’s gonna get a raise from his $600,000 contract when he’s a free agent after this season or what?

It was a good week for the Boston Bruins’ two-headed goalie monster of the 37-year-old Tim Thomas and his 24-year-old backup, Tuukka Rask. (Here’s the mnemonic: “two Us, two Ks, two points!”) On Tuesday, Rask turned in a 41-save shutout against the L.A. Kings, a performance that was followed by Thomas’ 45-save win over Ottawa a night later. Rask will be the ongoing subject of trade rumors for as long as Thomas holds on, but it would take a hell of a deal for the Bruins to even consider unloading their goalie of the future. Boston broadcaster Jack Edwards said both goalies could legitimately be top 10 starters on different teams, and Rask’s prime might be five years away — a chilling thought for opponents who have seen how good he already can be.

For some thoughts on Jimmy Howard, see here.

Recently Henrik Lundqvist has rescued a bird, lost at credit card roulette, and had his equipment guy break out the giant needle and thread mid-game to repair a busted thread.

Weird week. That there is some power-sewing.

NFL Week 15 Over/Unders from the Sharps

The Collapse of the Colts Has Been Years in the Making