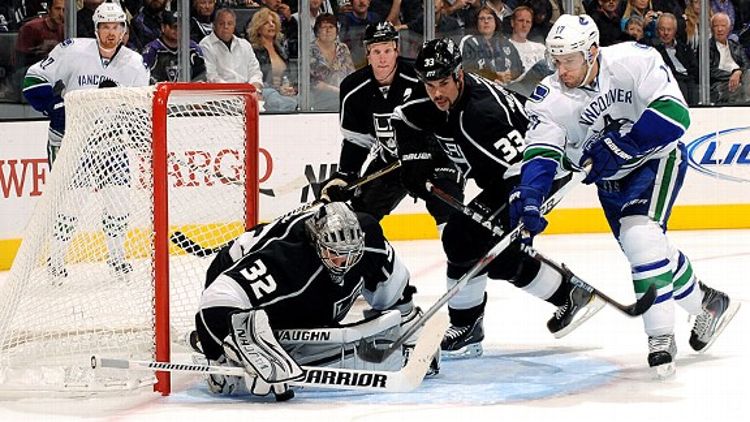 While the very best seats for watching the patterns and flow of a hockey game are along the broad side of the rink, sitting right behind a net affords the distinct pleasure of observing one of hockey’s most curious creatures in its natural habitat: the goalie. On Thursday night, I saw the L.A. Kings play the Vancouver Canucks at the Staples Center, and got up close and personal with Roberto Luongo (twice) and Jonathan Quick.

Part of being a professional athlete, obviously, is being able to tune out the riffraff and rinkrats who are constantly piping up with their unsolicited opinions. But still, when the play is down on the far end of the ice, and an adult man is standing there all alone, and the voice of a child rings out, clear and high-pitched and true as a bell, and that child is shouting: “YOU SUCK, LUONGO!” it’s impossible not to wonder if Luongo heard, and what went through his mind if he did. Probably not, and/or nothing — but I like to imagine that he cracked a small smile and thought to himself that this pipsqueak’s got nothing on the shit he gets on the regular from his own team’s fans back in Vancouver.

There were a healthy number of Canucks jerseys in the crowd. Some of their wearers had perhaps waited outside the Staples Center all day, milling around the same plaza where eager Twilight fans are literally camping out just to see the red carpet of Monday’s movie premiere. (It’s hard to tell which fans are more rabid.) And some of them were probably in town from Vancouver, where some of them probably kicked off the season by lustily booing their goalie for getting off to the rocky start that he’s known to have.

On the Canucks’ recent road trip, though, he’s been solid. He stopped 38 of 40 shots against Chicago earlier this week and 28 of 30 on Thursday night, and when he gets home he’ll no longer be playing in his dreaded month of October. Luongo’s tics are compelling to watch. I was shocked when I looked it up and learned that he’s only got two inches on the Kings’ Quick, because he looks infinitely bigger and more hulking — actually, he reminded me of the Fox football robot, shifting geometrically from side to side during the national anthems, and moving in sharp angles even when doing something like taking a swig from the Gatorade bottle. (He removes that thing from its sheath like its a pistol.)

Quick, on the other hand, stood with one arm slung over the crossbar when play was on the opposite end of the ice, like a confident high schooler on a date at the movies. His movements were snappy and, well, quick — Kevin Weekes described him as having “Crazy Bruce Lee-like flexibility, amazing reflexes, very competitive and active hands.”

And while he ended up the loser in the Kings’ 3-2 loss to Vancouver, none of the fans near me were getting on his case. (That was reserved for Dustin Penner, at whom the ladies around me screamed “SISSY!” with the passion of one thousand playground bullies every time he skated by.) Maybe it’s because all three of the goals he let in were during the first period, when he was all the way on the far side of the rink. That’s the drawback of those seats, for sure, but in this case it was more of a feature than a bug.

Toronto’s netminder James Reimer hasn’t played since a collision with Montreal’s Brian Gionta sent his helmet flying, and the team has, from the start, been cryptic about his condition. As the Toronto Star’s Dave Feschuk points out, it isn’t just fans who are being kept in the dark. Feschuk interviewed Reimer’s mother, who called the situation “frustrating” and asked why the team isn’t calling it a concussion while reporting Reimer has suffered “concussion-like symptoms.” (Coach Ron Wilson, when asked about the interview, said that it had crossed the line.) Leafs fans felt the impact of Reimer’s loss even harder after an unsettling game against Florida in which Toronto backup goalies Jonas Gustavsson and Ben Scrivens allowed five goals, but Scrivens bounced back and was excellent in goal Thursday night, stopping 38 shots against the Blues, going perfect in the shootout, and then being charmingly wide-and-wild-eyed in a postgame interview.

Marc-Andre Fleury’s last three appearances have all gone to shootouts, with Flower picking up the win in two of three. (His one shootout loss, to the San Jose Sharks — the first time he hadn’t won a game since Oct. 17 — came on a night where he had 34 saves otherwise.) He told the Pittsburgh Tribune-Review’s Rob Rossi that his goal for the season is to win 40 games, something he hasn’t done since 2006-2007.

Islanders goalie Al Montoya made a career-high 47 saves Thursday night against the Colorado Avalanche, but he was also in net while the Islanders squandered a 3-0 lead to lose 4-3 in overtime. The game-winning goal for the Avalanche came on a power play that resulted from a high-sticking penalty on Montoya. During the game, though, it wasn’t Montoya who was the topic of discussion but rather Evgeni Nabokov. Rumors began flying on Twitter that he had been traded for Columbus Blue Jackets defenseman Fedor Tyutin, though they were quickly shot down as the Islanders confirmed they had not so much as asked Nabokov to waive his no-trade clause. The New York Times’ Chris Botta, though, made it sound like its only a matter of time before Nabokov could be out the door: “Know this: Nabokov dying to leave, making no secret about it,” he wrote on Twitter. “Family still in CA. Isles dying to get down to 2 goalies.”

Previously by Katie Baker:
The Best Team in the NHL
Wedded Blitz! The October Marriage Season
New York Giants Give You Exactly What You Wanted (Unless You’re a Pats Fan)
Goalies of the Week

Filed Under: And a Beauty!, Katie Baker, Twilight