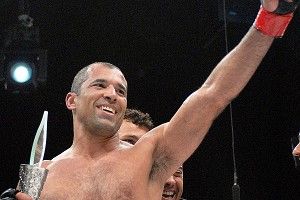 I never liked the idea of fighting for the sake of fighting. Other than my brothers’ hilarious brawls in the 1970s, it seemed wrong on many levels. So back in 1993, when some friends invited me over to watch the original Ultimate Fighting Championship, I remember worrying it would be barbaric. Barely any rules, a locked cage, and men trying to pummel each other? Unlike the scripted theater of wrestling pay-per-view events, there was no certainty of what might happen. The violence would be real. Teeth fragments, broken bones, joint dislocations, gallons of blood … all possible. And unlike hockey, there would be no organist on hand to restore civility.

The night turned out to be a pleasant surprise: We enjoyed some beers and witnessed Royce Gracie (the smallest competitor) defeat the field by using a modified style of jiu-jitsu developed by his father, Helio. This was more than a glorified pay-per-view melee. We finally found a way to resolve hypothetical arguments about superior fighting styles, and maybe even challenge long-standing (and as it turned out, somewhat erroneous) presumptions about the importance of size and strength.

Eventually known as “UFC 1,” that night became a breakthrough for the martial arts movement in America, as well as a victory for Rorion Gracie (who devised the event with Art Davie and filmmaker John Milius) and Gracie jiu-jitsu in general. Some background: Back in 1978, Gracie moved to America from Brazil and began teaching jiu-jitsu in a two-car garage in Hermosa Beach. He offered a free introductory class to any interested student and an additional free class for every referral. Anyone not making referrals, or expecting an oil change, was likely choked out. Rorion also invited practitioners of other fighting styles to compare their effectiveness against Gracie jiu-jitsu. The results were convincing enough that Rorion’s gospel even spread to an unlikely demographic of students: local law enforcement. Enough police cars were parked outside Rorion’s garage that neighbors mistakenly believed it was an ongoing narcotics operation.

By the mid-1980s, Rorion had recruited his brother (and future UFC Hall of Famer) Royce to help him with the teaching. Operating without a business permit but juggling over 130 students (another 80 were wait-listed), burgeoning interest and space constraints led to the opening of their first Torrance, California, facility in 1989. How well did it go? Well enough that they opened a fancier facility a few years ago, located just a few miles away — just close enough that you could still pretend it’s the first one.

I finally made it there this summer after enrolling my son and daughter in the Gracie Bullyproof program (for a basic introduction to jiu-jitsu). It’s a weeklong camp with a manifest of about 100 kids, including many out-of-staters and even one girl traveling with her family from Russia. Despite missing the age cut by about 30 years, I remained excited to prowl around Gracie headquarters as a UFC enthusiast.

Like always in the days before a big trip, I inspired myself by consuming applicable media. This time, it was John Carpenter’s Escape From L.A. (featuring Snake Plissken, who’s not related to the Gracies as far as we know) and the documentary Choke (featuring Rorion’s brother Rickson), which turned out to be a hidden gem, a provocative glimpse into the minds of fighters leading up to Tokyo’s Vale Tudo in 1995. (“Vale Tudo” essentially means “anything goes” — these unarmed competitions have fewer rules than sanctioned MMA events.) There’s great footage of Helio Gracie speaking candidly about his sons and the jiu-jitsu style that bears his name, as well as Rickson Gracie’s cerebral preparation and almost spiritual approach to fighting — something I found more fascinating than his superior skills and stamina. Plissken versus Rickson? Rickson, easily.

We stayed at Hermosa Beach — a 15-minute drive to Gracie Academy and a decent spot for bodysurfing after class. From the outside, the Academy seemed nondescript other than an arched, metal awning and towering glass doors (presumably to lure Stefan Struve). The inside was far more inviting: a spacious reception area, a well-appointed lounge boasting a flat-screen television and comfortable couches, even spa-level changing rooms. Everything looked orderly and clean, without any signs of dirt, fungus, or staphylococcus. Suddenly, I was worried they might not let my kids in.

The hallways leading to the training rooms were lined with framed magazine articles featuring various Gracie family members through the decades. Promotional posters of early UFC events hung near the rear of the building and provoked inescapable nostalgia. I noticed a UFC 3 poster with Ken Shamrock, one of Royce’s early rivals, and joked to a parent standing next to me, “It’s strange to see a picture of Ken Shamrock in here.”

I savored the moment alone.

As for the main training room, it resembled an arena football field with green mats lining the floor and walls. Its centerpiece? A giant fan that spun overhead like a submarine turbine. After a few hours of sweaty bodies expelling heat, it’s worth the electric bill. Leading to an on-premise museum is a small corridor decorated with letters of appreciation. The letterheads could take down an entire Stratego board: the CIA, FBI, Secret Service, Army Special Forces, Navy SEALs, and multiple other agencies — all of which have trained with the Gracies. Notes of kudos from daycare providers and convalescent home administrators were curiously absent.

The one-room museum was a joy to explore for anyone who enjoys yellowed newspaper articles, training logs, battered gloves, and even an infant gi passed down for generations. (I, of course, loved it.) You also have to appreciate the Gracie family tree positioned near the entrance, which isn’t just helpful to visitors but to any Gracie trying to remember birthday gifts for his or her 258-plus living relatives.

Toward the middle of the room, a glass display encased a scaled-down mockup of the first Octagon. Inside were details of Rorion’s and John Milius’s early thoughts on preventing panicked or distressed fighters from fleeing the battleground. Arguably, a number of the original ideas that eventually lost out to the Octagon enclosure might have boosted ratings. Some favorites: a moat with alligators, an electric fence, and a tank with sharks.

That was where I happened to be viewing Helio Gracie clips when his son Rorion strolled in to say hello. At 60 years old, he wasn’t just welcoming, confident, and engaging — he defied cellular decay and exuded the vitality of a teenager. He spoke proudly of Helio, who through years of observation and experimentation pioneered the fighting style almost synonymous with MMA.

Over the years, both Helio and Rorion upheld the family tradition of the Gracie Challenge: an open invitation to fight anyone willing. The boldness of that invitation became a pillar of the Gracie mystique; their predominant success helped, as did UFC 1 extending the Gracie challenge on a grander scale. I couldn’t help asking Rorion about jiu-jitsu’s limitations during standing fights — those moments before distance is closed and a fight is taken to the ground, when one devastating punch could ruin even the best student’s plans. (If that carrot is too tempting, check out Rorion and Royce demonstrating closing the distance in this vintage instructional video.) While acknowledging the danger, Rorion said his concern was no greater than his opponent’s fear of being upended. For a striker of any kind, even the slightest apprehension can interfere with footwork and timing. Clearly, history sides with his appraisal.

We ended up in the lounge, where Rorion spoke informally to a group of parents about his new book, The Gracie Diet. (I had just eaten a doughnut and figured there might be some incremental caloric burn in listening.) Essentially, the Gracie Diet is less about what one eats than the proper adherence to food combinations not burdensome to the digestive system. By improving the efficiency of digestion, more energy can be devoted to other bodily functions. Rorion admitted the diet did not have scientific testing, arguing that its credibility came through decades of observation.

“The proof is in the longevity,” he claimed.

The best testimony to the effectiveness of the Gracie Diet? The Gracies themselves, at least by outward appearances or even this anecdote: Just a year before passing away, Rorion’s father wanted to teach him a new choke and did so. He was 94 years old. Rorion laughed about all the diet commercials screaming “Look at me!” with shapely models as their spokespersons. “I don’t want to see them to see if it works. I want to see their mothers,” he pleaded. And yes, he was making reference to the long-term outcomes of diets.

I caught up with Rorion one more time on the final day of Gracie Bullyproof, while he was signing autographs and taking photos. I couldn’t help asking him about UFC 1 and Dana White’s baby in general. Rorion considers the UFC an “enjoyable” spectacle and admires what its current owners have built; as any die-hard fan could tell you, two of his sons now appear on a Fuel TV Ultimate Insider segment called “Gracie Breakdown,” where they analyze critical moments from past fights and discuss hypothetical countermoves that could have altered the outcomes. Still, Rorion believes that scoring, time limits, and rules don’t allow for a true determination of the better fighter (a position he’s long held). You could say he respects UFC but views it as more of a sport than a true test. When I asked if the widespread familiarity of GJJ made it less of a factor in winning fights these days, he flipped it around: Really, that validated his original goal, right?

“I set out to make the world more aware of Gracie jiu-jitsu.” Rorion said. “Was I successful?”

And then some. The growing popularity of mixed martial arts is owed, in part, to the vision of a family wanting to share their knowledge with the world. Sure, the UFC’s current leadership has fueled its most explosive period of growth, but nothing prospers without strong roots.

We shook hands and I took off to find my kids among the throng of newly immersed Gracie students. Heading out to the parking lot, I glanced back at the building one last time. It’s hardly Canton or Cooperstown, much less Field of Dreams, but there’s something special about the approximate birthplace of the UFC.

We the Pharaohs: A New Doc Chronicling Bob Bradley's Time in Egypt