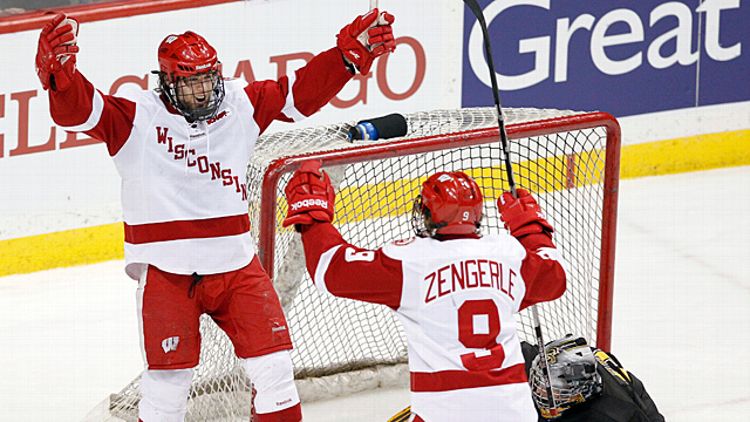 While NCAA basketball brackets were mostly left busted after this weekend, the national championship tournament matchups in another winter sport were just being built. It was championship weekend across the country in college hockey, with the five conferences that award automatic bids to the NCAA tournament holding their playoffs in a lead-up to Sunday night’s selection show. When the ice was cleared, 16 teams were given berths in the tournament, which culminates at the Frozen Four in Pittsburgh this April. In its honor, here are 16 takeaways from, to borrow from Badger Bob, a great weekend for hockey!

16. We’ll begin with the coolest thing to happen in college hockey this weekend: The Minnesota Golden Gophers women’s team won its second straight national title, capping off a 49-game winning streak that dates back to February 18 of last year. After a regular season in which it outscored its opponents 216-36, Minnesota faced much tougher challenges in the contests leading up to the national title. In the NCAA quarterfinals, they needed triple overtime to beat North Dakota 3-2. They also won their semifinal game over Boston College in overtime. And while Boston University proved to be surprisingly resilient in the finals, it was the Gophers who pulled off a commanding 6-3 win in front of a sellout hometown crowd.

15. It’s disappointing that the game didn’t air on TV, but the live stream provided on the NCAA’s website was a well-run production. Its broadcast crew made a few good points about why Minnesota is so unbeatable — foremost is its depth. While many teams might be able to snag an Olympic-caliber player like Amanda Kessel or Megan Bozek or Finnish goalie Noora Räty (or a rising sensation like Hannah Brandt), few other teams would be able to get all four — let alone in addition to the dozen other high-quality players on the team. As for some of these stars: Kessel finished the championship game with two goals and two assists, good for 101 points in 41 games this season; she was also named the Patty Kazmaier Memorial Award recipient as the top player in women’s college hockey.

14. Since the NCAA began formally sanctioning a women’s hockey national title in 2001, all 13 titles have been won by Western Collegiate Hockey Association teams. Minnesota-Duluth has earned the trophy five times, while Wisconsin and Minnesota have each won four.

13. On the men’s side, the WCHA — which will have a markedly different look next year when the new big-time Big Ten hockey conference gobbles up some of its top teams — has also had outsize success. Six of its teams (Minnesota, North Dakota, Denver, Minnesota State, St. Cloud State, and Wisconsin) made the postseason Sunday night.

12. Of the teams on that list, Wisconsin had to win the WCHA tournament outright to get into the NCAA, and it did so with a 3-2 win over Colorado College on Saturday night. Freshman Nic Kerdiles recorded a goal and an assist and was named MVP — a nice ending to a season that began with a 10-game suspension that nearly caused him to leave Wisconsin before he’d even attended. The season had that sort of trajectory for just about everyone on the Badgers. I spoke with coach Mike Eaves in November during an injury-riddled 1-7-2 stretch. “There’s these seasons where you seem to be riding into the wind or swimming upstream,” he said, before turning to more optimistic imagery to complete the triathlon. “Eventually we’re gonna reach the top of the mountain.” Since November 30, Wisconsin has gone 21-5-5.

11. Other league tournament winners this weekend who received automatic bids: Union, which reached the Frozen Four last season and defeated Brown in the ECAC finals; Canisius, who won its first Atlantic Hockey title; UMass-Lowell, “the program with its nose pressed up against the glass, wanting a piece of action,” which got it with the Hockey East trophy (freshman goaltender Connor Hellebuyck won the MVP award, another great moment in an 18-2 campaign full of them); and Notre Dame, which beat Michigan 3-1 to take the Central Collegiate Hockey Association crown.

10. Notre Dame’s Sunday-afternoon win decided who would take the final postseason spot. In this case the lucky one was Yale, which squeaked in despite losing both the semifinals and consolation finals of the ECAC tournament. Left on the outside looking in was Michigan — the first time in 23 seasons that the Red Berenson–led Wolverines didn’t make it into the NCAA tournament. Even for the winning Irish, the victory was bittersweet: The CCHA will be dissolved after this season, making Sunday’s game a small bit of history. Notre Dame coach Jeff Jackson, who also coached Lake Superior State in the ’90s, got nostalgic. “There was a day that to play here meant more than playing in the NCAA tournament,” he said. “Everybody wanted to get to the Joe [Louis Arena], and the NCAA tournament was gravy.”

9. The CCHA isn’t the only thing to have said farewell this weekend: So did legendary Boston University coach Jack Parker, who coached the Terriers for 40 years and has earned three national championships while winning 896 games. (His off-the-ice legacy is more complicated.) Parker and Jerry York have long been two pillars in the Boston hockey scene — they’ve been competing against one another since they were in high school — and his retirement is the end of an era. A Boston Globe column about Parker told the story of how the coach, once a pack-a-day smoker, said “worrying about BC will kill me before smoking does.” So it was fitting that, before his team fell to Lowell in the Hockey East finals, his final career win was over the Eagles.

8. Here are the matchups for the upcoming NCAA regionals this weekend. (PairWise rankings are in parentheses, and 1-seeds are indicated with an asterisk.) One team from each grouping will go to the Frozen Four in Pittsburgh:

7. College hockey selects and seeds its postseason field using a combination of objective measures — automatic bids and a highly dynamic ranking system called PairWise — and good old-fashioned backroom decisions. (Here’s a really great primer by College Hockey News’s Adam Wodon on how it all works.) Once the 16 teams have been chosen via the PairWise rankings, the tournament committee then doles out the travel schedules and matchups; top seeds are guaranteed a spot in the closest regional to them, and other teams are slotted in. Occasionally small swaps are made, and that’s where things get dicey. In this case, for example, the committee swapped no. 12-ranked Union out of the Midwest group in Toledo and into the East Regional much closer to home, in large part to make travel easier. By doing so, though, Minnesota State and St. Cloud are now in the same region — hence only one of those two WCHA teams can advance.

6. For the majority of the season, WCHA teams and fans hate one another. Write about Minnesota and you’ll have Wisconsin fans rolling their eyes; compliment Denver and face the wrath of North Dakota. When it comes to the playoffs, however, these usual antagonists tend to frequently and passionately see eye to eye on certain things — namely, the paranoid belief that everyone in college hockey is conspiring against the WCHA at all times. In 2005, all four teams to make it to the Frozen Four came from the conference. That the phenomenon hasn’t happened again since then, many believe, is because the committee specifically machinates things so that it can’t. Take this postseason, for example: There are six WCHA teams, but they’ve only been placed in three of the four regionals. Outrage!

5. Western College Hockey Blog’s Chris Dilks pointed out the narcissism of thinking that way, noting that the committee has other considerations to keep in mind. “With all due respect to the Mavericks,” he wrote, “I think the committee was likely more concerned with keeping Union close to home […] than they were with Minnesota State steamrolling through Boston College and Quinnipiac.” He also makes the great point that people seem to forget how volatile the PairWise rankings are; they’re not precise enough to make swapping an 11th- and a 12th-ranked team that big a deal. (Yale, he points out, could have finished the weekend rated as high as fifth or as low as 15th.)

4. In speaking with CHN’s Wodon, tournament committee chair Tom Nevala, the associate athletic director at Notre Dame, explained that attendance considerations are at play when the committee decides where to send the qualifying teams. “The greatest amount of feedback we get, whether it’s from fans or participants, is that when they go to the national tournament, it should be a great atmosphere,” he said. “When you play in a eight-to-10-thousand seat arena, and only three or four thousand are there, that’s not necessarily the best atmosphere. The kids work all year to play in a great environment.” To that end, the organizers wanted to keep Boston College in Providence, as an example.

3. Speaking of Boston College, there’s a sense that their corner of the bracket affords them one of the easier paths to the Frozen Four. Canisius over Quinnipiac is suddenly a trendy upset pick — the Griffs have won their last eight games and are viewed as the hot hand — and while Union made it to the Frozen Four a year ago, they’re not as strong a team as they were then. Still, the tournament is always such a crapshoot that it’s hard to predict that any victory would be an easy one. And for the time being, BC remains without Jerry York, who had eye surgery this season but could possibly return in time to get back behind the bench if the Eagles advance through the postseason.

2. On Thursday night, the 10 finalists were announced for the Hobey Baker Award, which goes to the best player in college hockey. You can take a look at them here; I’ll guess that the three “Hobey Hat Trick” honorees will be BC’s Johnny Gaudreau, North Dakota’s Danny Kristo, and St. Cloud State’s Drew LeBlanc, a bit of a dark-horse candidate but one I fully support. Friday’s game between Niagara and North Dakota will feature three Hobey finalists on the ice.

1. The best thing about the NCAA hockey tournament is how unpredictable it will be: The only reliable thing about the combination of balanced teams and streaky goaltenders and teenage erraticism and percussive crowds and tiny sample sizes is that together they cause wild outcomes. Here are a few things we do know for certain: Unknown sophomores will come out of nowhere to score crucial game-winners; stories will be told about beloved coaches; WCHA fans will freak out all weekend (just kidding, love you guys, don’t hurt me), and everything about the experience will be delightfully raw. Is it Friday yet?