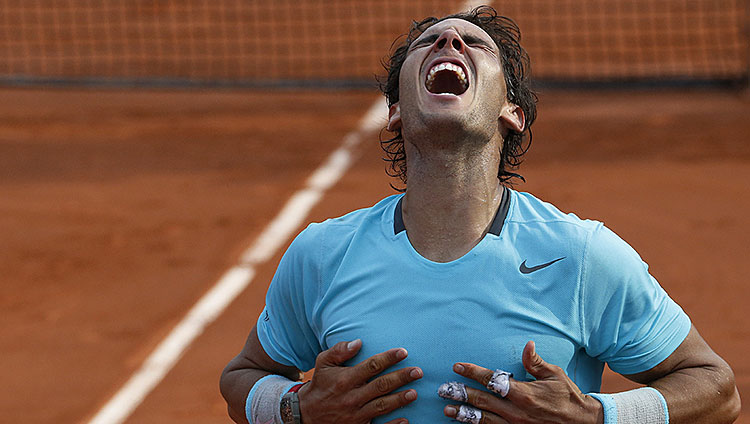 The rivalry between Rafa Nadal and Novak Djokovic is the best in tennis right now, but sometimes a little part of me wants to wave the white flag and cry, “STOP!” The best of their matches have produced the most exquisite pleasure and pain: the sight of two of the top athletes in the world pushing each other — and themselves — to the limits of their physical capacity and beyond. Nadal and Djokovic have played each other 42 times. Nadal came in to Sunday’s French Open final leading their head-to-head record 22-19. Their matches tend toward the epic. They have played a six-hour match (six hours!) in an Australian summer, sliding across hard courts under a hole in the ozone. Last year’s semifinal at the French, which Nadal won 9-7 in the fifth set, clocked four hours and 37 minutes. Really, think of this: The world’s top runners could run not one but two marathons in that time. Nadal and Djokovic stretch and sprint and scramble, scrape drop shots off the court, pull themselves into the air by the strength of their own shots. It’s astonishing, thrilling, superhuman stuff. It’s all that sports are supposed to be — and sometimes are — about: the desire to win and the suffering it takes to do it.

But the suffering! The suffering can be just brutal to watch. At times during the French Open final, on an unrelentingly hot day after two weeks of cool weather, Djokovic looked giddy just from the effort of walking to his bench during changeovers. Near the start of the fourth set, he looked down and wretched. In slow motion, NBC replayed the sickening result. For the rest of the match — even as a resurgence of strength seemed to flow through him — his mouth was set in a miserable, grim line.

A few games later, Nadal was the one who looked beyond help. He repeatedly bent over and grimaced; his back was gone. He muffed an easy overhead, as if to protect his back. He suddenly seemed unable to put any pace on his serve, and for a few games almost stopped running, letting Djokovic rip easy winners into the open court. His eyes were frantic — skittish, scared, and wild. You watch Nadal play and you see the embodiment of invincibility, a physique that seems formed by gods. Then he briefly stumbles or buckles, and you’re reminded of the strain his style demands of his joints. You know the ligaments of his knee are just frayed bungee cords at this point, and you know his back can’t sustain the incredible torque he puts on his groundstrokes. You remember the injuries he’s had and the injuries that are probably in store. You remember that it only seems like he can do this forever.

And this is before we get to the emotional burden, the weariness that comes from carrying the weight of the moment. For both men, this match meant as much as any has in a long, long time. Nadal was trying to win his ninth title at Roland Garros (that’s NINE IN 10 YEARS). He was coming off the most distressing clay-court season of his career. He had been beaten by Djokovic four times in a row, including a decisive loss only a few weeks ago. He came into the tournament as the favorite, but mostly because of the respect due to a guy who’s lost only one match ever at the French Open — and, until this April, had a 260-9 record on clay over the past nine years. He even encouraged rumors of his own decline. When a reporter asked him to comment on a rare early-round loss, his response was basically, Get used to it. “With the years it is the normal thing,” he said, “and in the end everybody suffers.”

For Djokovic, the pressure was just as extreme. The French is the only major he has not yet won. Despite being the most consistent player on tour for years, and despite a fantastic record last fall and this year so far, he has not won when it counts most: He’s lost the last four majors. Djokovic is coming off a worrisome wrist injury, and after his semifinal match against Ernests Gulbis, he appeared to be sick and confessed that he was sluggish and struggling in the heat. He is 27 now and has come so close to winning the French. The distance between him and Nadal at Roland Garros has been hardly wider than the thin space between the ball mark in the alley and white line. It’s the great consequence of small misses — a few loose shots, a touch of the net.

They both looked nervous Sunday. This was not a match we will remember for the tennis. Djokovic managed to win the first set despite showing his nerves. Nadal managed to win despite never showing his best play. It was dramatic — and painful — to watch, but it wasn’t lovely. When Djokovic botched his second serve on championship point, the sound of the crowd — on TV, at least — was muted. Who wants to cheer a double fault? Nadal fell to his knees. There was triumph but also relief.

And there were tears. For Nadal they came freely. Djokovic’s eyes glistened and grew red. His face was a dam against the display of his disappointment. But it could hold only for so long. The French crowd, not always known for its classiness, applauded him so long, and with such warmth, that the emotion finally broke through. The exhaustion showed as well. Maybe next time they can just approach the net before they start, give each other a hug, and then, together, bow out. 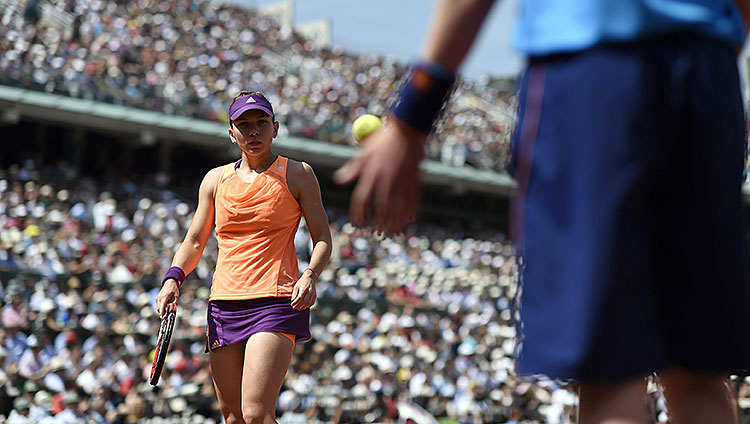 Playing her first major final, Simona Halep, who came into the French Open ranked no. 57 a year ago, opened the match by showing why she has become the second-best all-around clay-court player on tour right now. She went up 2-0. But she was playing against the best clay-court player in the world right now, full stop — the woman who will grind and pound everything out, who looks like she would rather burst into flames than lose a third set. Maria Sharapova won the next five games.

But Halep settled herself. Her ball-striking was clean and strong, her defense smooth, her tactics sound. She tested Sharapova, trying to exploit her relative lack of athleticism by pulling her out wide, trying to cut off angles by pushing Sharapova back into the center of the court. But Sharapova’s movement has vastly improved in the past few years. She has learned to scramble and slide. Sugarpova is not afraid to get dirty. Looking at her face, shaded by her visor, I was half-convinced she’d applied war paint and smeared her cheeks with clay. 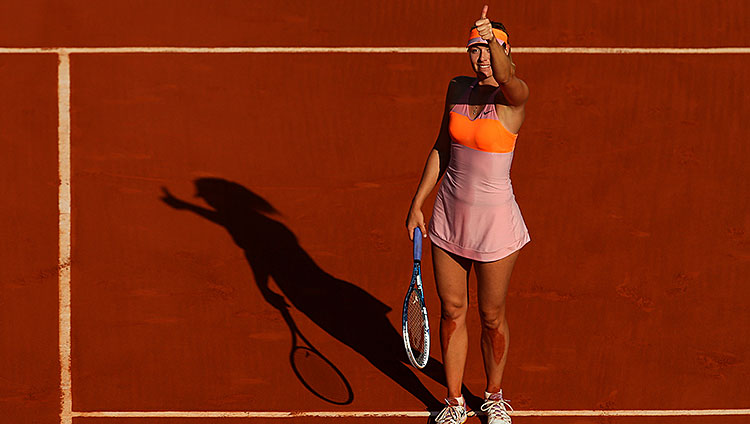 Sharapova has basically two tactics: hit the ball hard and hit the ball harder. She took every angle that Halep gave her. When Halep came up the middle, she stepped right or left and whaled. She played mind games, turning her back to the court when Halep was ready to serve and taking her sweet time when she stood to serve herself. She increased the intensity of her shrieking grunts to a pitch that would shatter a fragile psyche. She took a seven-minute bathroom break after losing the second set. She got net cords to fall her way on big points, turning her will into luck. Sharapova communicates her drive with such obvious intensity that when she hits an incredible shot, I’m almost quicker to credit her desire than her skill.

For the most part, Halep was defiant and strong. During the second-set tiebreak, with Sharapova two points from winning the championship, Halep even used her opponent’s obnoxious slowing tactics to disrupt the rhythm, and she won the next four points and the set. She hid her intentions, changed directions, and tossed up feathery defensive lobs. Again and again, she tracked down Sharapova’s daring forehands and made her take another risk, hit one more blistering shot.

After Halep’s last shot, a lob, drifted out, Sharapova celebrated her second French Open title with unabashed joy. “If somebody had told me that I’d win at some stage in my career, that I’d have more Roland Garros titles than any other Grand Slam, I’d probably go get drunk,” Sharapova said afterward. “Or tell them to get drunk, one or the other.”

Halep returned to her chair and pulled a towel over her head and, like Nadal and Djokovic, cried.

Then she put the towel away and smiled.

NBA Finals Shootaround: You Wouldn't Like Me When I'm Angry