Map of the Stars 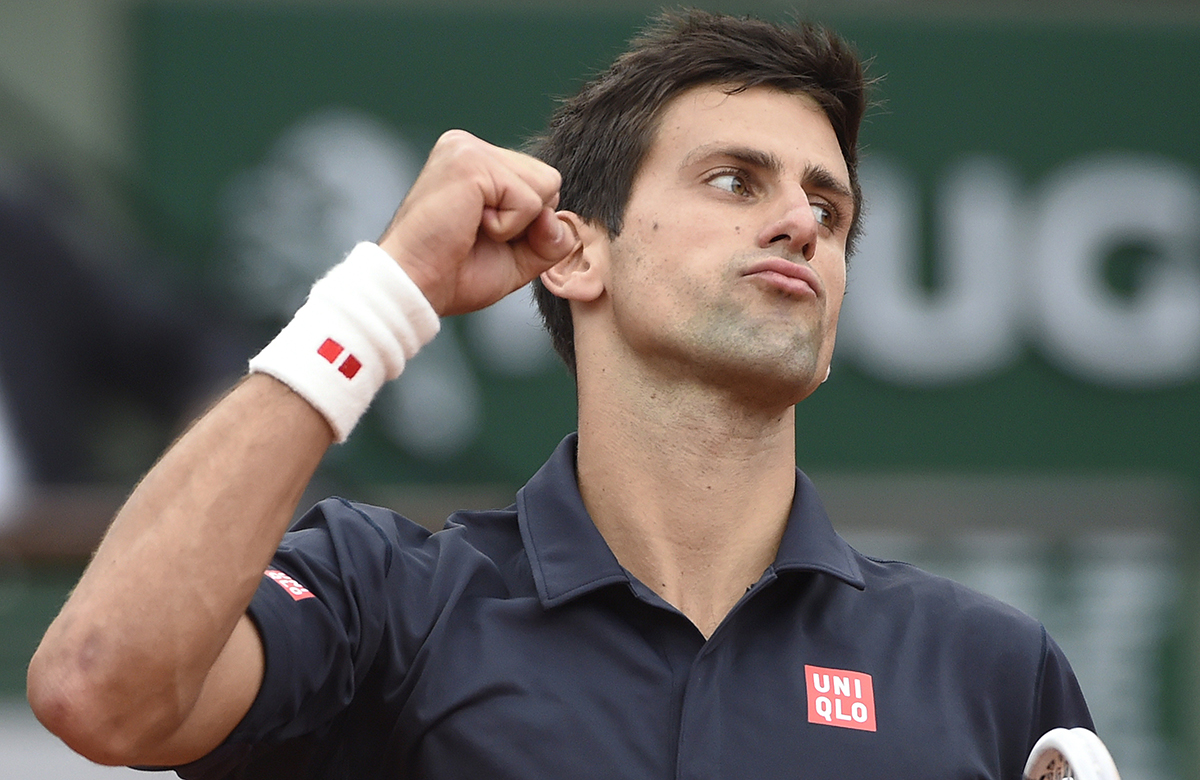 It has been easy to forget that Novak Djokovic is the best tennis player in the world.

He finished 2013 on a 24-0 run. His record this year is 24-3; his winning percentage is the highest among players on the tour. He has won three titles this year, all ATP Masters 1000 tournaments, the level just below the Grand Slams. He has beaten Rafael Nadal, his biggest rival, the world no. 1, the last four times they played — and those matches were not close. In the final of the Italian Open in Rome, less than three weeks ago, despite playing so badly during the first set that he smashed his racket on his chair, Djokovic put on a show of brutally efficient tennis — hard, flat, compact forehands that ended the points early; backhands that scoured the lines. He refused to let Nadal entrench himself behind the baseline, pulling him forward with wicked little drop shots and charging the net himself. Nadal struggled to find his rhythm. He was pushed back and yanked around. During one stretch, Djokovic won 13 of 14 points. But what was more impressive is what happened when Nadal played like the no. 1–ranked player. Djokovic simply played better.

When he plays Ernests Gulbis on Friday, he will be playing in his 15th semifinal in his last 16 majors. It would have been 16 out of 16 if six points in the fifth set against Stan Wawrinka in Australia in January had gone the other way. He has made the final in 10 of his last 15 slams. He has won five slam titles in that span.

At the French Open this year, he has often been magnificent, and when he has not been magnificent he has been good. He has lost only one set in the tournament. His biggest test came in the quarters against Milos Raonic, a kid who looks like he should be playing center for the Toronto Maple Leafs. Raonic hit 21 aces, but Djokovic won 71 percent of the points on Raonic’s second serve — and won three-quarters of the points on his own serve. The scoreline was close — 7-5, 7-6 (5), 6-4 — but the match was not. Djokovic took the ball early and, aside from a few nervy shots into the net, controlled the majority of the points.

So why has it been so hard to shake the sense that something is wrong?

It wasn’t so long ago that he seemed fragile — physically vulnerable, full of fear and false bravado. He was known as a goofball, a hypochondriac, a jerk. Then he was called a party crasher, a showman. He was seen as a threat to the beautiful dyad of Federer and Nadal. Now he is known for his charisma, his care, his humor, and his kindness. He has changed — or, more probably, we have.

Taken by itself, his style can seem uninspired. It is flat and surgical. When I imagine the play of Roger, Rafa, or even Andy Murray, I imagine them in isolation. I imagine the whirling follow-through of Rafa’s forehand, or the way Roger’s feet hover off the ground, or the blind backhand blocks Andy makes on the run. Djokovic’s strokes are so linear, so straightforward — his every movement so justified — that you can never forget the point of the shot, which is not to be pretty but to be precise. Even the most obvious quality of his game, his flexibility — the way he can hit a forehand from the splits, or rip a backhand balanced at an improbable angle to the ground — has the simple effect of shortening the court.

The funny thing is, when I imagine Djokovic, I imagine him in a state of inspiration. I think of him countering Juan Martin Del Potro’s 100 mph forehands at Wimbledon last year with shots that scorched the grass. I think of him sliding across concrete in New York and Melbourne, reaching what would be winners and returning winners of his own. I think of him saving four match points against Jo-Wilfried Tsonga at the French Open in 2012. I think of him doing backflips on a tightrope wire, refusing the distinction between offense and defense, between stupidity and intelligence, between going for victory and going for broke. I imagine him closing his eyes and going for it. We can call it luck or call it skill. We should call it faith.

We called him the Djoker because he was funny and a wild card and had a crazy, slightly malevolent smile. But he took to the role of fool. He tweaked power and then played the role of king — so honestly, so subversively that it seemed like a game, which it was. He played his best, most dangerous, most thrilling tennis when he was most in trouble. That was when he could do anything — reach any ball, hit any shot.

“I haven’t really been myself in the important matches in the big moments in the last two years,” he said this spring. In his case, it doesn’t seem as simple as confidence — not when he talks about it. What he wants, what he needs in those big moments, is something to play for. 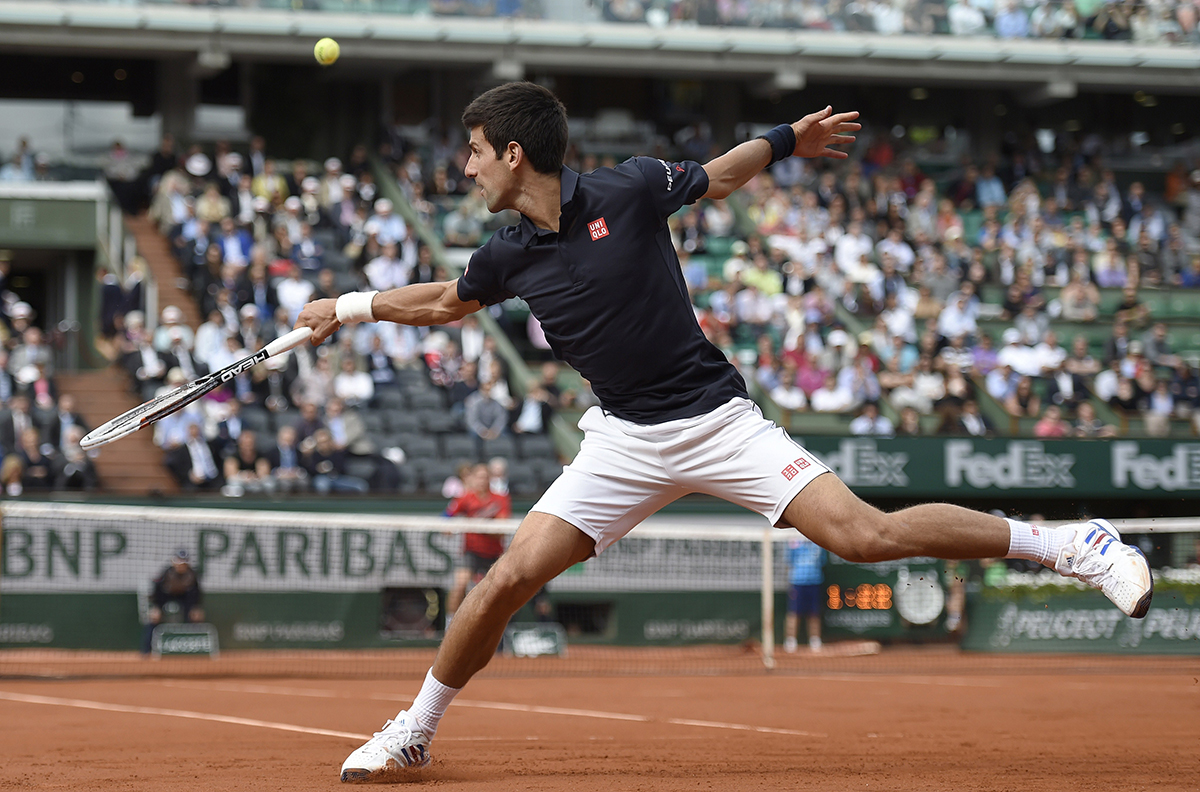 Is it enough just to win the French Open, to complete the career slam — the way it was once enough to win Wimbledon, to pluck some grass and stick it in his mouth and taste his own sweat? Is it enough to play in order to be Serbia’s single greatest ambassador? Wojtek Fibak, a former player who has advised Djokovic, recently told the New York Times’s Christopher Clarey that, before Djokovic’s semifinal match against Wawrinka at last year’s U.S. Open, Fibak reminded him of the sacrifices his parents had made so he could play tennis. By the end of his speech, Djokovic was crying, “Serbia! Serbia!”

He wants you to know his story: how his parents had run a pizza place in a ski resort town. How he had crouched, night after night, in a bomb shelter during the war, and trained on netless courts. He wants you to know the mystical powers of a gluten-free diet. He called his memoir Serve to Win. It includes recipes.

Two years ago, his grandfather died and he played in his memory. Last year, he played in memory of his first coach, Jelena Gencic. This year, after winning in Rome, he drew a large heart in the clay. He was thinking of the floods that have devastated southeastern Europe, killing at least 65 people and wrecking the homes of thousands more. “This is for Serbia and Bosnia,” he wrote on the camera lens. He donated the $750,000 purse to the relief effort.

But an athlete also has to play with abandon, which means he has to play for himself. Last winter, despite ending 2013 on an unbeaten run, Djokovic hired Boris Becker as his coach. The move baffled most people. Novak’s relationship with his old coach, Marian Vajda, who stayed on in a supporting role, was known to be successful and sound. Djokovic’s game has no glaring weaknesses that Becker could obviously address. Becker was famous for his competitive fire, his ruthlessness — his self-involvement, not his strokes.

But that, I think, is what Boris Becker is all about. Djokovic has said that he hired Becker as his new head coach to help him in those one or two moments when he was faltering. So far, it’s not clear whether it will work. It has taken time, Djokovic has admitted, to become comfortable with Becker and his new role on his team. It hasn’t helped that Djokovic has performed better in tournaments where his old coach, Marian Vajda, has been present instead of Becker. “He’s been more than just a coach to me,” Djokovic said of Vajda. “Great support, a mentor, an older brother, a father, whatever you want to call it.”

Will this arrangement last? Who knows. Becker is not there to teach Djokovic better technique. He is there to inspire him — not the way Serbia inspires him, or the memory of the dead inspires him, or the way playing at the edge of defeat inspires him. Becker, I think, is there to inspire him, in a way, to play for himself. Becker can make the game smaller. He can reduce it to a court, a moment, a singular need to win, one man’s desire. If Becker succeeds, it will be because he taught Djokovic to be selfish.