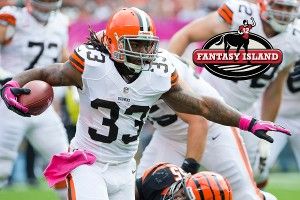 214, 227, 181. Those are the allowed rushing yards for Baltimore over their last three games. Expect a big game from Trent Richardson both running and receiving this week. After a hot start, Joe Flacco has barely been better than Brandon Weeden, and both Dennis Pitta and Torrey Smith have nearly disappeared. Don’t expect much from Smith with Joe Haden blanketing him all game, and expect even less from Pitta. The Browns have only allowed more than six points to a TE once all year.

If you can trade for Cam Newton, do it now. Newton averaged just 229 passing yards and 0.33 total touchdowns over the past three games, primarily because he played a brutal string of pass defenses. In the second-year quarterback’s first four games, however, he threw for 253 yards per game and averaged 1.75 total touchdowns. Newton is one of two quarterbacks in the NFL with a minimum of 15 deep passing attempts (20-plus yards) to not throw a deep touchdown. Things will begin to improve for Newton, and they’ll do so as soon as this week, against a defense that has yielded nearly 300 more passing yards than any other in the NFL.

After some early-season growing pains, the Broncos are finally who we thought they were: a fantasy football juggernaut. Peyton Manning and his rejuvenated neck won’t have any trouble against a Bengals secondary that’s been toasted by the likes of Ryan Tannehill and Brandon Weeden. Willis McGahee is one of the few dependable feature backs you didn’t have to grab in the first round. From his bunker in Foxborough, Josh McDaniels is probably flipping off every draftnik who chided him for selecting Demaryius Thomas ahead of Dez Bryant. The only disappointing facet of Denver’s offense is the awkward tight-end time-share between Jacob Tamme and Joel Dreessen — not exactly Gronk/Hernandez 2.0. In their meeting last year, A.J. Green annihilated Champ Bailey (10 receptions, 124 yards, 1 touchdown), so don’t lower your expectations for him because of the matchup.

I’m starting to lose faith here. Even when Matt Stafford FINALLY has a good day, you are MediocreTron. Your best chance to turn me around is the very sad Jags, so listen closely … I’m all-in on you this week despite the knee injury you’re “plowing through.” Plow like the wind, Calvin. PLOW LIKE THE WIND!

If you can’t make it happen this week, then you should sit out a week or two and think about yourself. Just think. About yourself. Elsewhere, there might be a competition at running back. Joique Bell continues to emerge as a change of pace to Mikel Leshoure, who was gone virtually the entire fourth quarter against the Seahawks. Although Jim Schwartz swears he’s not injured.

Andrew Luck’s most impressive trait this season is his ability to keep cool and operate with confidence in any situation. He is leading the Colts to wild-card contention. As always for the Colts this year, Reggie Wayne had way more targets last week than any other Colts receiver (11 vs. seven for the next best option), and it helped him to a 91-yard game. He is a must-start against the Dolphins despite their stout passing D.

Vick Ballard had a SPECTACULAR TD in overtime, but Bruce Arians says that at best he has earned a time-share with Donald Brown. I’m sorry, but effort that intense should be worth something. For real, here are the things that I could do at my own job that would be equivalent to that crazy TD, each of which would absolutely be rewarded with an immediate bonus/promotion:

1. Getting a hotel to forgive an entire $200k food and beverage bill because there was a spider on the breakfast buffet.
2. Getting Malcolm Gladwell to give a keynote address at our conference for $1,000 plus coach airfare.
3. Getting a Chicago Loop office building to sell me 9,500 square feet but only charge me for 7,000. And throw in furniture.
— Kat Gotsick

TRADE DOUG MARTIN NOW. Do I have your attention? Good. Go back and reread that sentence, and hope that your league-mates are like the rest of America and don’t read Fantasy Island. Here are some facts: Carl Nicks is the best guard in the league. Doug Martin has had almost 60 percent of his rushes behind Carl Nicks. Carl Nicks is out for the season. They are replacing him with Ted Larsen, whom Tampa benched in Week 5. Doug Martin is coming off his biggest game of the season and many people consider him a top-10 back. With Carl Nicks, he was. With Ted Larsen? TRADE DOUG MARTIN NOW.

Big Ben spread the ball around to nine different receivers in last week’s win over the Redskins, and he should again find success through the air against the Giants. Start Mike Wallace, Antonio Brown, and Heath Miller this week as Pittsburgh does some more heavy lifting through the air. Pittsburgh’s defense has been solid against the pass, but the Giants may be the best passing team in the league. Victor Cruz should have a bounce-back week after only having two catches for 23 yards against the Cowboys, and look for Hakeem Nicks to follow close behind him.
— Ben Liebman

Lost in circular conversations about tortured Rust Belt fan bases is the fact that being a fan of the Dallas Cowboys has been miserable and taxing for 17 seasons. And it’s this magnified failure only the English national soccer team can identify with, where you lose nine jarring games in prime time going back to 2010. Then there’s the well-documented November flings during which the team peaks. And the defense is the league’s best bend-don’t-break unit, allowing fewer than 200 passing yards a game. And going back to his first career start against the Panthers in 2006, Tony Romo is 12-1 against the NFC South. Any Cowboys fan can feel the imminent breeze of one-off hope — like when the ‘Boys ended New Orleans’ perfect season on the road in 2009 with an inspired 24-17 performance. It’ll be a constrained, 20-13 type of affair wherein Matt Ryan is held to one passing touchdown.

Ranked outside of the top 20 quarterbacks in most leagues, Cutler has been a sensational disappointment in 2012. How much of a disappointment? He has fewer fantasy points than Mark Sanchez. Holy crap. If your starting quarterback is off this week, though, Cutler makes for an interesting one-week option. He faces a Titans defense that has allowed 17 passing touchdowns — second-worst in the NFL — and a higher YPA than the Redskins. With Cortland Finnegan out of town, I don’t think the Titans have anyone to match Brandon Marshall’s physicality on the outside. Cutler will go to him early and often, en route to 300 yards and two touchdowns.

Remember when these teams met in the first round of the playoffs three years ago? Arizona won 51-45 in a defense-is-optional thriller, led by Kurt Warner’s 379 yards and five touchdowns. My, have the Cardinals fallen off. Do you think the daunting John Skelton/Kevin Kolb combo could even put up half of those passing numbers against a high school team? Anecdotally, it’s never good when your starting running back — LaRod Stephens-Howling — has three times as many syllables in his name as touchdowns scored. Be sure to start Randall Cobb, who’s developed into one of Aaron Rodgers’s favorite targets.

This is the game with the greatest blowout potential, mostly because the Bills have a staggering penchant for getting blown out. In three of its four losses, Buffalo has been outscored by 20-plus points. Incidentally, the Texans have clobbered opponents by 20-plus points on four occasions. Start all your Houstonians, including but limited to: Matt Schaub, Arian Foster, Andre Johnson, and Owen Daniels. This is not to say that you must bench Fred Jackson, C.J. Spiller, and Stevie Johnson — the Bills are one of the few teams entirely capable of putting up 30 in a 20-point loss.

Marshawn Lynch looks for his third straight 100-yard game as the Seahawks host the Vikings at Qwest Field. The Vikings D is solid up front, but the Hawks are a different team at home. I expect Lynch to break 100 yards, and score a touchdown. Meanwhile, Adrian Peterson should match Lynch carry-for-carry, but don’t expect anything from the Vikings passing game. Christian Ponder has been regressing the past few games, so Percy Harvin owners should be hoping for a bunch of reverses and screens if they expect Harvin to put together a solid week.

1. Mike Vick has more rushing yards than any Saint.
2. The New Orleans crowd does something inappropriate.
3. Jon Gruden will make a comment along the lines of, “If I was coaching a football team again, I would want a guy like Drew Brees on that team.” (Yep, just padding my stats.)
4. Devery Henderson gets deep for a score.
5. Jackson has more yards than Maclin, but Maclin scores.
6. My girlfriend will ask, “Who do you want to win in this game?” I will stare blankly at the screen and shake my head.
7. People will think that Mike Vick is BACK after he throws for two scores and runs for another. He will not be back.
8. Andy Reid will eat at least one timeout at the end of the first half that he should have used. He will also eat a po’boy during the third quarter.
9. PHI 33, NO 29
10. The T-Wolves will upset the Nets in Brook— oh wait, that’s for my NBA Island writing contest I’m in with Zach Lowe and Jay Kang. They are WAY ahead of me.

About Last Weekend: You Don't Mess With Bama