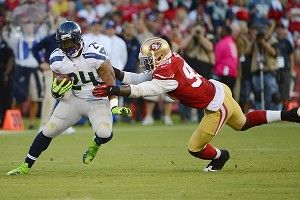 This week, Jimmy Kimmel Live moved its entire production to Brooklyn, USA. Jimmy and I were born in Brooklyn, and it was supposed to be a homecoming of sorts. Little did we know (actually, we knew, we saw the forecast a week before — we’re stupid) a huge storm would interfere with this homecoming by ravaging the East Coast. Luckily, our venue, the Brooklyn Academy of Music, was not affected and we were able to film four of our five planned shows in front of the most enthusiastic crowds we’ve ever hosted.

Bad news is — as a result of Hurricane Sandy, many of the great eateries in Brooklyn have been closed indefinitely, which means we’ve been stuck eating two-and-a-half-ish star hotel food for most of the week. If there’s a worse Sandy-related story, I’ve not yet heard it.

I’m kidding, of course. There’s devastation just minutes away from our studio. The effects of this storm have been horrendous, and it’s heartbreaking to see what these people are going through.

But I have a plan: We should capitalize on my incredibly dynamite-as-of-late NFL prop picks — then take the Chris Christie–size profits and donate them to a relief fund tasked with cleaning up the mess left behind by Sandy.

Speaking of those profits — last week, I netted 29,000 jermajesties,* bringing my yearly total to 96,050 jermajesties overall. Let’s keep it going in Week 9.

(*Obligatory weekly explanation: A “jermajesty” represents the fake name given for a dollar amount. It is also the unfortunate name of one of Jermaine Jackson’s sons. I owe him my life for this comedy gem.)

The Bears will score a defensive touchdown vs. the Titans (+250)

My friend Harry’s fantasy team is 7-1. And yet every week, he asks me a question similar to this one: Who should I start, Michael Bush or LaRod Stephens-Howling? At this point, no 7-1 fantasy owner in America should be making such decisions. The secret to Harry’s unheralded success … the Chicago Bears defense. The most underrated fantasy player on the board has six pick-sixes this year. This week, pick-six no. 7 comes at the expense of Matt “My reality-show-loser-turned-daytime-talk-show-host sister-in-law makes more money than I do” Hasselbeck. He’s gotta get that middle name changed already. It’s embarrassing. 5,000 jermajesties

In their seven games this year, the Saints have given up two or more TD passes to all but two of their opposing quarterbacks. One of those two QBs, Cam Newton, ran and threw for one, and the other quarterback plays for the Kansas City Chiefs. As far as I know, a prop bet has never determined the fate of an NFL player’s employment. But if I’m Andy Reid, I use this one as a measuring stick and have this conversation with his starting quarterback. “It’s very simple, Michael. Unless you can throw for over 1.5 touchdown passes this week against the repugnant Saints defense, you will, from next week forward, have a lot of time on Sunday to pick up the defecation emanating from your beloved new dog.” Or something like that. 25,000 jermajesties

This one could be fun to watch. The two hardest-running ball carriers in football (yes — Arian Foster fantasy owners — I said it) square off this Sunday. Both players are pink hot, and one or both of these guys is going to bust loose. Maybe throw a little more on the dread-locked dude fueled by the 12th man. 5,000 jermajesties and 3,000 jermajesties, respectively

The longest touchdown in the Bills-Texans game will be over 45.5 yards

This might be the week we see Texans phenom J.J. Watt continually bat a ball to himself 70 yards in the air all the way downfield for a score. It’s really the only thing left for him to do. 20,000 jermajesties

The number to beat here is around 1.8. This Lakers squad is already taking on the look of the tired, desperate, out-of-sync, and overpaid team that got pummeled in the 2004 NBA Finals by the Pistons. Oops, I see Kobe wants me to shut up now. Let’s move on.

John 3.16/1: Odds that God will punish the Jets and the tri-state area in general with another hurricane for going another week without starting Tim Tebow

Yes — scientists are now saying that’s what caused it. Something to consider over the bye week, Rex.

8/1: Odds that during the next Pittsburgh home game, an ex-prison guard/Steelers fan shoots a player from the crowd after misidentifying him in a throwback uniform as an escaped con

Depending on the player, it might all be worth it to see those hideously disgusting bumble bee/diarrhea-colored Halloween costumes go away forever.

Smith reportedly called police recently to protect him from two of his sisters, who came over to “harass and torment” the 308-pound lineman “in the pursuit of collecting financial gain.” THIS is the brave 300-plus-pound former All-American whose job it is to protect my professional sports hero Tony Romo from becoming one with the turf every play?? 7 wins … 9 losses. I hope.

That’s the bet I made last week. Only 24 de-magnitized-free hours to go before I can cash in. Wish me luck. This could be the biggest miracle since I was 7 years old and the goldfish I won at the Feast of San Gennaro here in Brooklyn (and named Lee Mazzilli, after my favorite Met) survived an entire winter.

50,000/1: Odds that ANY trick-or-treater can beat me in tic-tac-toe as seen during my latest Halloween hidden-camera bit on Jimmy Kimmel Live

The challenge is out. Faster than a speeding bullet! More powerful than a locomotive! Able to lose a game of tic-tac-toe in only five moves. It’s Super-Mini-Kevin Durant-man!!

What generates more money this weekend: The American Red Cross’s disaster relief fund or sales from the new iPad mini?

I wish this wasn’t close, but this is a sick, sick country. Let’s get healthy. This week, it’s not about the iPad. It’s about the themPad. Wow — is that not clever! Please donate whatever jermajesties you can to directrelief.org or any organization aiding victims of Hurricane Sandy.