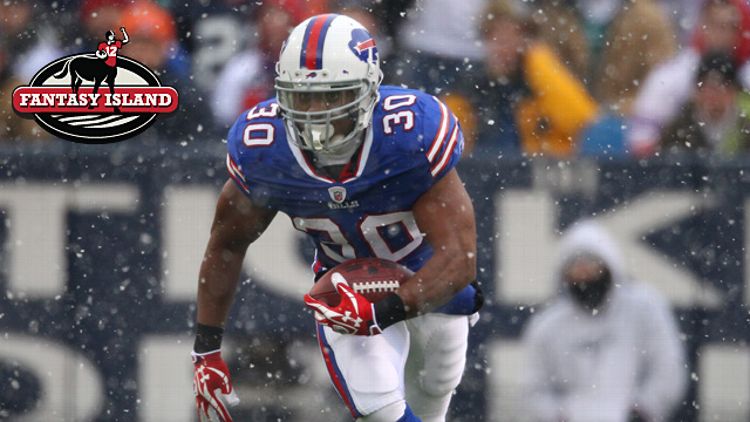 I think we can all agree on one thing: Having your favorite team play on Thursday is the worst. There isn’t enough time to get properly excited, you have to get up the next morning (which means you can’t get super drunk), and your team is often woefully unprepared. Not to mention the fact that Parks and Rec just started back up! So when the Carolina Panthers (my team of choice) put up a performance last Thursday that can only be described as “poop-tacular,” it meant that I was only cheering for my fantasy team on Sunday. It also meant becoming this guy at the bar:

“Why don’t they run A.P. right up the middle on FOUR straight downs?”

“HOW DID TITUS YOUNG CATCH THAT HAIL MARY AND NOT CALVIN?????? LIFE IS SO UNFAIR!”

Needless to say, without Cam’s beautiful smile to distract me from the rest of the games, I got to really watch closely. The result was some thoughts on who might make a difference for your fantasy squad over the next few weeks, if not for the rest of the season.

Tashard Choice, RB, Bills: Buffalo may not have ruled out C.J. Spiller, but Choice is looking like he’ll be the only healthy RB on the Bills’ roster this week. He looked great against the Brownies on Sunday, and even though the Pats are a tough matchup, I think the Bills will try to keep the New England offense off the field by controlling the ball. Tashard Choice isn’t exciting anybody, but often, fantasy is about opportunity.

Daniel Thomas, RB, Dolphins: The situation looks similar for the second-year guy from Kansas State, although his matchup against the Cards looks a lot worse than Choice’s. Side note: Which seemed more likely at the beginning of the season, that the Cards would be a bad matchup for your fantasy RB, or my friend’s wife saying, “Hey, Bill Belichick looks well-dressed tonight”?

Even against Arizona, Thomas should get plenty of looks. Lamar Miller is an interesting idea later down the line, but he’s still learning Miami’s offense and shouldn’t cut into Thomas’s work all that much in the next couple weeks.

Rest of the Season

Donnie Avery/T.Y. Hilton, WR, Colts: You may remember how much I love the Colts this season. Oh, what’s that? You don’t remember which one of the Fantasy Island contestants you’re reading? Don’t care? Cool. Sorry. One of the players I really liked was Austin Collie, who was recently voted to be one of the unluckiest football players ever. Now that he’s out for the year again, it opens up a hole on the other side of the field across from Reggie Wayne. One of these two guys (maybe both) is going to be a very respectable flex option the rest of the way. My bet is Avery, but if you’ve got the room on your bench, both are worth a pickup.

Other WR options and a few words to describe them

Kyle Rudolph, TE, Vikings I actually recommended Rudolph in Week 1, but now I think he has the opportunity to be a top-10 TE the rest of the way. Rudolph is quickly becoming Christian Ponder’s security blanket, and I think he’s the best readily available TE.

I’m not going to go too deep on defenses, but you might like these options more than the ones on your team. All of them are available in more than 50 percent of leagues: