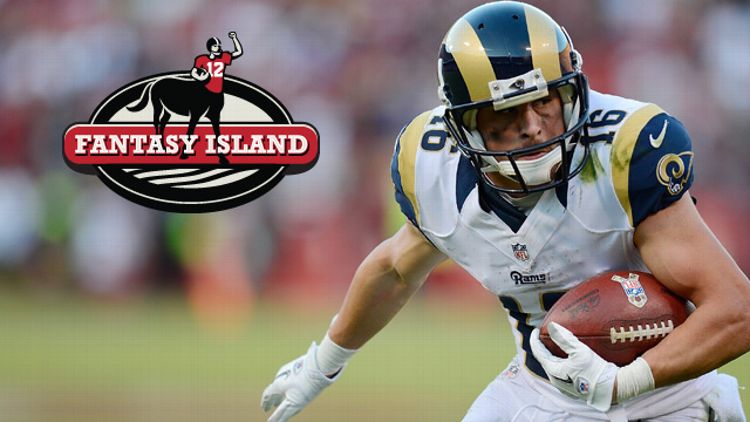 If a tie in the NFL is bad, then a tie in fantasy football is considerably worse. There are plenty of silver linings to be found on both sides after Sunday’s 24-24 draw between the Rams and 49ers. While they didn’t win, the Rams outplayed an elite division rival and might be the league’s second-best last-place team. The 49ers can blame the poor showing on Alex Smith’s concussion and take solace in the fact that they remain strong favorites to win the NFC West.

In the case of a fantasy tie, there is no saving grace. For example, your only hope for a victory (or a loss, if he happened to score negative points), Owen Daniels, is declared out for Sunday Night Football with hip pain, and the tie is official because, outrageously, there isn’t even an overtime period to settle the stalemate. And unlike Danny Amendola, you know it.

Admittedly, this can be a rather traumatic experience, and there are five-step programs, support groups, and Taylor Swift songs to help you get over it. Nevertheless, a cold-turkey approach is usually most effective at wiping the tie from your memory. Stop dwelling on the missteps that led to Andre Johnson’s three-point performance, put on your hard hat, and start mining for waiver wire gems.

Speaking of waiver wire gems, here’s the NFL’s latest and greatest offering that I could find in their pre–Black Friday ad:

Amendola was thisclose to breaking Sunday’s tie with a long touchdown reception in OT that would’ve significantly bolstered his 10-point total. However, it was probably better that a penalty negated the play in question — as a result, owners who merely glanced at the Rams-49ers box score (because everyone was watching Cowboys-Eagles) won’t be fawning over him. Assuming he’s sufficiently recovered from the clavicle injury that sidelined him for a month, plucking Amendola from the waiver wire is the best thing an owner can do this week. I don’t even think it’s legal in some states to add a receiver who averages 8.4 catches per game this late in the season.

If you’re mired in the cellar and need to make a heavy splash, the waiver wire leftovers may not be for you. Instead, I’d recommend making a trade before next Wednesday’s looming deadline. Every league has a couple of owners ripe for swindling. (One great example: the guy who overpays for his favorite team’s players.)

For those who have been snake-bitten by Eli Manning’s recent swoon, that trade may be for a quarterback. Unfortunately, Manning the Younger’s fantasy stock has plummeted faster than David Petraeus’s presidential aspirations, so it’s unlikely that you can obtain anything with a modicum of value for him.

But I can’t keep him in my starting lineup if I want to make the playoffs! OK, I hear you. There are a couple of ways to replace Eli without sacrificing a top-flight scorer — two divergent roads in a ginger-tinted wood. I first came across this advice during the wee hours of Monday morning — biding my time as I normally do at the Grand China Buffet — and determined it was my solemn duty to report it back to the world: Go after one of the AFC North’s redheaded gunslingers. With all due respect to Megatron, Andy Dalton is blessed with the league’s best deep threat since Randy Moss and will exploit him whenever he sees fit. Dalton’s fantasy owners are blessed with a Bengals defense that keeps him passing all game long. If you’re lucky enough to play in the 10 percent of ESPN.com leagues in which Dalton is a free agent, grab him.

Before we delve into the other redheaded option in a post-Manning world, the requisite full disclosure:

So take this with a grain of salt, but don’t dismiss it. Weeden’s remaining schedule includes sorry-ass pass defenses (Redskins, Raiders), teams potentially resting their first-stringers (Broncos, Steelers twice), and dumpster fires (Chiefs). According to the Gospel of Herm, all players should play to win the game, but Weeden’s incentive is deeper. Every victory he notches will help keep the Browns out of the Geno Smith/Matt Barkley sweepstakes, extending his career and my fantasy team name’s viability another 16 games.

About the Previous Evening: Lakers Lose, Spartans Win, and All the Marlins Get Traded