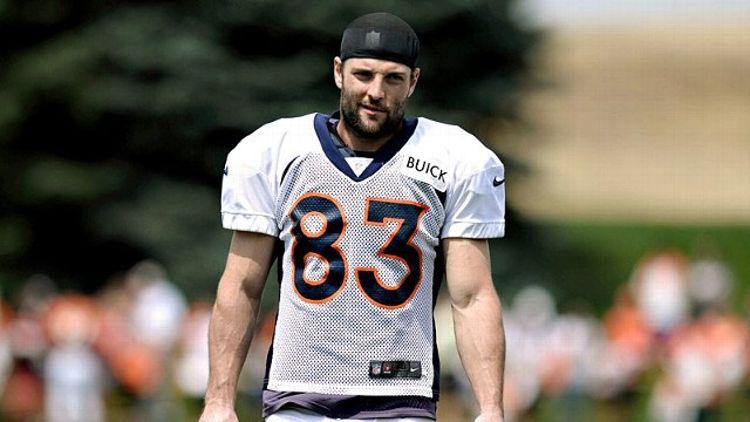 Did you know that Denver is the only place in the whole wide world Wes Welker would’ve left New England for? I did, because I read Chris Ballard’s revealing profile of Boston’s biggest traitor since Johnny Damon Roger Clemens Benedict Arnold. Some other crucial tidbits from the piece:

Statistically speaking, it’s a virtual lock that Welker will regress this year unless he pulls a Tonya Harding — or something similarly sinister — on Eric Decker. The only real questions are just how much he’ll regress, and correspondingly, how much his fantasy value will decrease. But first, let’s debunk the myth that Welker’s presence will radically lessen the value of Decker and Demaryius Thomas.

Last year, Thomas and Decker were on the receiving end of 141 and 123 targets, respectively, from Peyton Manning. Moreover, these targets came relatively deep downfield — Decker finished the season with an average target depth of 11.4 yards, with Thomas not far behind at 10.9. As John Parolin astutely pointed out on ESPN.com, “Part of what made Welker so prolific in New England was his short average target depth (7.7 yards downfield, sixth-lowest among 76 qualifying wide receivers).” This should be music to the ears of owners concerned about Welker undercutting Thomas/Decker’s production. Also absurd is the notion that Manning would consciously eschew two supremely physically gifted WRs in favor of the smaller, slower Welker, especially when those supremely physically gifted WRs have experience with Manning that Welker sorely lacks. (NO, THE PRO BOWL DOES NOT COUNT.) A solid rapport is particularly valuable with a quarterback like Manning, who audibles incessantly and cringes at the mere thought of huddling. Welker is unquestionably the Broncos’ third-best WR, and his effect on Thomas and Decker will be negligible.

The stat projection illuminati have already taken the liberty of penciling Welker in for the 58 targets Brandon Stokley received in 2012, which is the easy part of this whole conundrum. We know that Welker will ably fill Stokley’s shoes as Manning’s slot ace. However, Welker is a demonstrably better player than Stokley, so it stands to reason that he’ll exceed Stokley’s 2012 totals, but by what margin? A helpful comparison here is the 2004 Colts, which featured Manning, two superb outside receivers (Marvin Harrison, Reggie Wayne), and our main man Stokley, back when he was young and wild and free. Harrison and Wayne were the primary beneficiaries of Manning’s record-setting season, but Stokley still managed to provide his owners with 68 receptions, 1,077 yards, and 10 touchdowns, eminently respectable stuff for a slot receiver. This is the sort of season I expect of Welker (minus the 10 TDs, which would be a career high), perhaps prorated a bit to account for the increase in Manning’s passing attempts from 2004 (497) to 2012 (583). Consequently, Joel Dreessen and Jacob Tamme — whose average target depths fall more in line with Welker’s — will see their numbers slightly diminish. Thomas and Decker will do the heavy lifting for a second consecutive season, both comfortably accruing more yards and TDs than Welker, but owners are currently siding with Welker over Decker in spades, which is only another market inefficiency for you to exploit in your next draft.

Meanwhile, Welker’s apparent clone, Danny Amendola, is replacing him in New England, and all anybody wants to know is whether or not he’s going to stay healthy. Here’s the answer: I don’t know! In my defense, Dr. James Andrews doesn’t know either. Nor does Dr. House (presumably), so I think I’m in pretty good company. It’s worth remembering that only two of Amendola’s five professional seasons have been marred by injuries: 2011, when he was placed on injured reserve after a freak elbow dislocation, and 2012, when he suffered an even freakier clavicle dislocation and a foot injury. Unless he’s the unluckiest dude in the history of the world, you’d think he should be able to survive 2013 without a bizarre, crippling dislocation ending his season.

Amendola’s upside is too high to let the specter of his injury history keep you from drafting him. Gronk is sluggishly recovering from his umpteenth surgery of the year, Deion Branch and Brandon Lloyd are street free agents lining up opportunities in the arena league, and Aaron Hernandez is, well, yeah. The point is, the Patriots have an entirely new receiving corps (for all intents and purposes, Julian Edelman does not exist), so the one guy who’s not a rookie — Amendola — has a massive leg up on his fellow WRs with regard to learning New England’s playbook and forging a connection with Tom Brady, a connection that should manifest itself in many, many completions. In my estimation, ESPN.com’s aforementioned stat projection illuminati sold Amendola way short with their modest forecast of 74 receptions, 754 yards, and seven TDs; he’s more than capable of posting the type of prolific numbers Welker routinely accumulated in New England.

I find the intersection of Thomas, Decker, Welker, and Amendola on fantasy draft boards particularly interesting because they always seem to be clustered at the top of my best players available list when I’m about to select a WR1/2. If you plan on going the trendy RB-RB route, a strategy I’ve espoused, you’ll probably experience the same thing. For instance, let’s say you have the eighth overall pick in a 12-team snake league. You don’t want to get stuck with, say, David Wilson or Montee Ball as your RB2, so you grab C.J. Spiller and Matt Forte with your opening picks while shortsighted owners around you splurge on Aaron Rodgers and Drew Brees. (Not that there’s anything wrong with Rodgers or Brees, of course, but there’ll be good QBs on the board in the sixth round, whereas the pickings at RB get perilously slim by the fourth.) With your two stud RBs in tow, it’s time for a WR1. Depending on the competence of your leaguemates, here are some guys who might be available: Thomas, Welker, Vincent Jackson, Roddy White, Larry Fitzgerald, and Randall Cobb. In this case, Thomas is by far the most desirable option (and rightly has the highest ADP on ESPN.com), and Welker, who’s grossly overvalued on ESPN.com with an ADP of 35.7, is definitely the least desirable.

Two rounds later, in search of a WR2, you might face a similar dilemma, this time with Amendola and Decker. The Amendola–Decker quandary is infinitely more difficult to solve than Thomas–Welker, as you could make a legitimate argument for either of them. (To illustrate how lopsided the Thomas–Welker battle was, let’s just say I’d take both Amendola and Decker over Welker in a heartbeat.) Ultimately, though, Amendola’s potential as the Patriots’ clear-cut best WR is too enormous to pass on. With Thomas starting opposite him, there’s a cap on how much Decker can achieve this season. With Amendola, anything is possible … as long as he stays healthy.

And, without further ado, here’s my complete, OFFICIAL WR power rankings for the 2013 fantasy season:

Anyone known as “Megatron” to the general populace gets a tier to himself. That rule applies to all aspects of life, not just football — if your neighborhood called the mailman “Megatron” unironically, rest assured that he would get his own tier in the mailmen power rankings. That’s just how it goes. Also, remember what I said about drafting RB-RB? You can throw that out the window in a PPR league and take Megatron as high as fourth overall.

Because of my unwavering commitment to drafting RB-RB in non-PPR leagues, I never end up with these guys on my team, but I really wish that weren’t the case.

I’m not the biggest Roddy White fan. He’s 31 and growing older by the second (this is a law of science), and the gap between Julio Jones and him continues to widen. I wouldn’t be surprised to see his impressive consecutive-games-started streak end this season, which would send Jones’s fantasy value into outer space. Hey, at least his Twitter account is consistently entertaining!

Colston, Wayne, and Smith are traditional standbys and thus sort of boring to draft, but they’ve shown admirable consistency over the years and rarely, if ever, disappoint. (Wayne and Smith can’t be held accountable for the times they were forced to play with Curtis Painter/Dan Orlovsky/Jimmy Clausen, because being forced to do so probably qualified as a human rights violation. Colts and Panthers fans know EXACTLY what I’m talking about.)

Guys, “Somewhere Over the DwayneBowe” is no longer a creative or funny team name. I’m in two leagues with owners who’ve employed that outmoded catastrophe, and it’s the absolute worst. They remind me of the evil folks who still watch movies on VCR. Find something new. (Pro tip: HUMAN ISAIAHPEAD is drawing rave reviews from my leaguemates!)

I was about to make a joke regarding Antonio Brown’s status as the worst no. 1 WR in football from a pure talent standpoint, but then I remembered the years of my Browns fandom that were poisoned by a receiving corps headlined by Mohamed Massaquoi and Brian Robiskie and thought better of it.

I don’t support recreational codeine usage (as far as you know), but if it results in a meager two-game suspension that causes an otherwise immensely talented player to fall into the 12th round or later, it can’t be the worst thing in the world, especially since we’ve already established that “Somewhere Over the DwayneBowe” is the worst thing in the world. Happy drafting, everybody!