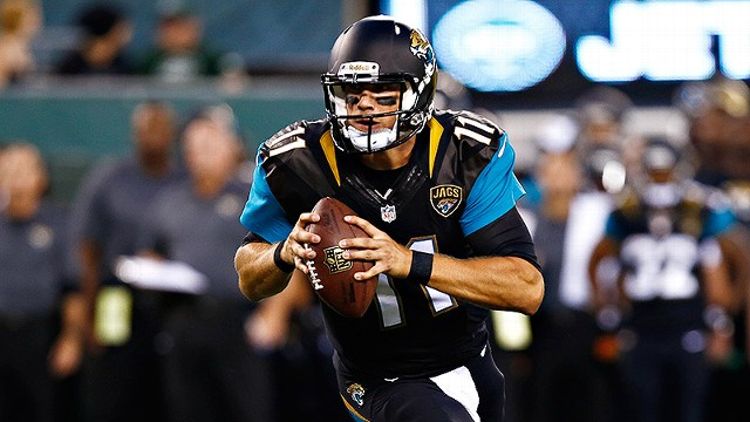 1. Let’s do something no self-respecting fantasy football analyst has ever dared to try: begin with Blaine Gabbert. On Monday, Jaguars coach Gus Bradley officially crowned Gabbert his starting quarterback. To his credit, Gabbert has performed well this preseason, particularly in Saturday’s battle royal with Mark Sanchez, where he went 13-for-16 for 165 yards and a touchdown, and also suffered a fractured right thumb that will keep him sidelined until the regular season starts.

Whatever else you think about Gabbert and his mullet, it’s worth remembering that he was a highly touted first-round pick just two years ago, and is therefore not completely devoid of talent (meaning he’s not a terrible quarterback in the way that, say, Ryan Lindley is a terrible quarterback). Accordingly, it’s difficult, but not impossible, to talk ourselves into the idea of a new-and-improved Gabbert. To wit: Perhaps no quarterback could’ve found success behind the porous offensive line Jacksonville had in 2012, which will certainly be better with Luke Joeckel in the fold. Perhaps Jack Del Rio/Mike Mularkey, two guys who’ve never been accused of competence, severely hindered Gabbert’s development, and Bradley is the real deal. Perhaps years of being motivated by the most unwieldy mantra ever, FEPWDM (“for every person who doubted me”), will finally pay off. Perhaps there’s hope for a brighter, Gabbert-led future in Jacksonville.

Of course, all that being said, I wouldn’t actually draft Gabbert, even to be my backup quarterback in a 16-team league. The point here is that if he improves (which is more likely than most folks think), the fantasy value of everyone else around him will skyrocket. Maurice Jones-Drew won’t have to face stacked boxes all the time, Cecil Shorts could morph into a legitimate WR2, and Justin Blackmon won’t have to deal with the emotional toll of so many overthrown passes.

2. Carson Palmer looked like, well, Carson Palmer against the Cowboys, which is to say that he went 7-for-15 for a measly 66 yards. When you combine Bruce Arians’s F.P.O.E. offense (FLY PATTERNS OVER EVERYTHING) with a horrendous offensive line and an inert QB, these are the results you get. I thought the presence of a legitimate receiving corps could at least rejuvenate Palmer’s career temporarily, but apparently the wrath of Arians knows no bounds. I’d be wary of drafting Larry Fitzgerald before the fourth round, and I’d avoid Michael Floyd altogether. Instead, opt for guys in favorable situations like DeAndre Hopkins, Kenbrell Thompkins, or Chris Givens.

3. If you plan on waiting for a tight end, Jordan Cameron is an intriguing option. His average draft position (129.7 on ESPN.com) is currently lower than that of many inferior, lower-upside prospects, including Brandon Myers, Jared Cook, and Jermichael Finley — although that will probably change soon. Rob Chudzinski has made tight ends fantasy relevant for almost his entire career, and add that Cameron is a former Divison I college basketball player — he redshirted one season at BYU — running plays called by Norv Turner, and it becomes obvious that he’s Antonio Gates 2.0. Any opinion to the contrary is totally baseless!

4. Speaking of intriguing tight ends, Zach Sudfeld caught a touchdown and a two-point conversion on Friday night, and I have no idea what to make of him. On one hand, Tom Brady has famously targeted his tight ends nonstop since the Patriots drafted Rob Gronkowski and Aaron Hernandez in 2010, and everyone except Michael Hoomanawanui’s mom thinks Sudfeld is his best tight end when Gronk’s hurt. On the other hand, Gronk and Hernandez were major investments around which the Patriots tailored their offense. Sudfield is an undrafted rookie. Moreover, it’s not like Brady has a long and storied history of producing Pro Bowl tight ends. Christian Fauria and Benjamin Watson weren’t fantasy studs, and neither was Kellen Winslow Jr. when he subbed for an injured Hernandez last season. Conclusion: Take Sudfeld with a 13th- to 15th-round flier if you must — especially now that Gronk appears headed for the PUP list — but don’t get crazy and spend a 10th-rounder on him.

5. It truly pains me to be the 897th person to say Danny Amendola is the next Wes Welker. Fortunately, Amendola isn’t worried about the great expectations — he’s busy catching preseason touchdown passes from Tom Brady like Wes Welker circa 2007! But seriously, they’re like the same exact person. Even Mike Leach said so, and Mike Leach is all knowing.

6. Shane Vereen is officially pushing top-20 status for running backs in PPR leagues. Through two preseason games, he’s been targeted 10 times in the passing game and has gained 41 yards on seven carries. If his upward trajectory continues, Vereen will become what everyone thought Dexter McCluster would be — a textbook RB/WR hybrid, born for your flex slot.

7. Last week, I questioned why Josh Gordon was getting so much preseason hype (“hype” is a relative term when talking about Cleveland wide receivers) when Greg Little pretty clearly has a better rapport with Brandon Weeden. The answer, it seems, is because Gordon is much more talented, as evidenced by his ability to make one-handed grabs like this. In a weird way, Gordon’s two-game suspension was a blessing in disguise for those hoping to nab him; missing two early games doesn’t mean a whole lot in the long run, and now moralists/folks who treat Week 1 like the Super Bowl will scratch Gordon from their draft boards, freeing him up for shrewd owners like you!

8. Here is the proper reaction a fantasy owner should have to the A.J. Jenkins/Jon Baldwin trade.