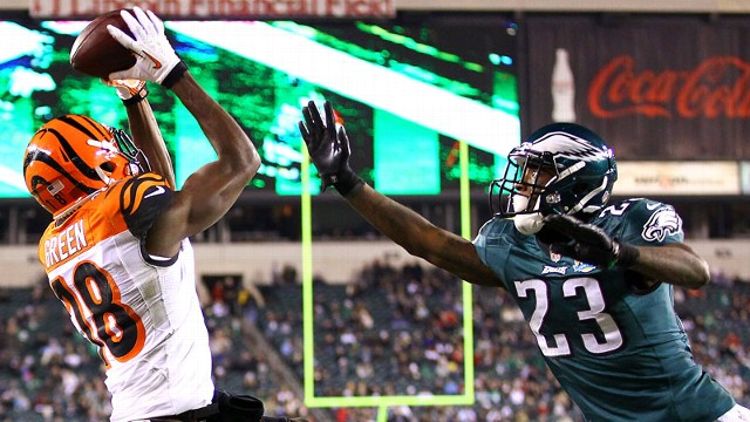 Last night was the always-wonderful rookie talent show episode of Hard Knocks, and this year’s installment did not disappoint. For a full rundown, make sure to check out Andrew Sharp’s recap of the show, but right now we’re going to focus on one particular moment.

As Sharp noted, the rookie show began with a sketch about the Bengals coaching staff’s reaction to Green tweaking his knee on the first day of training camp. In contrast to the relative lack of concern about fellow wide receiver Andrew Hawkins, the rookies portrayed the response to Green’s injury as pandemonium. It was a funny moment, but my first thought was — Who could blame them? In just his third year, Green has emerged as one of the two or three best wide receivers in the league, and on an offense devoid of another game-breaking talent, he may be the most important player on a team with reasonable expectations of making the playoffs. My favorite moment of the Hard Knocks season thus far is Bengals offensive coordinator Jay Gruden asking Marvin Lewis if the team could take an injured Green with them for the preseason opener in Atlanta. The idea of spending five whole days away from Green was too much for him.

For anyone who needs a reminder about why this line of thinking is totally reasonable, I present the video above. A few highlights:

• Andy Dalton screaming “That is what we do!” at Green after the latter went up over Champ Bailey for a touchdown catch (:31). That’s an interesting use of “we.”

• The full-extension, diving catch against Jacksonville at the :16 mark.

• The Bengals announcer referring to him as Adriel Jeremiah Green every time he scores a touchdown. (I’ve always been a fan of local announcers’ signature phrases).

There are more, but I’ll let you take it all in. The point here is that any and all love for A.J. Green will always be warranted.