Everyone in the NBA Needs to Fear ‘The Rondo’ 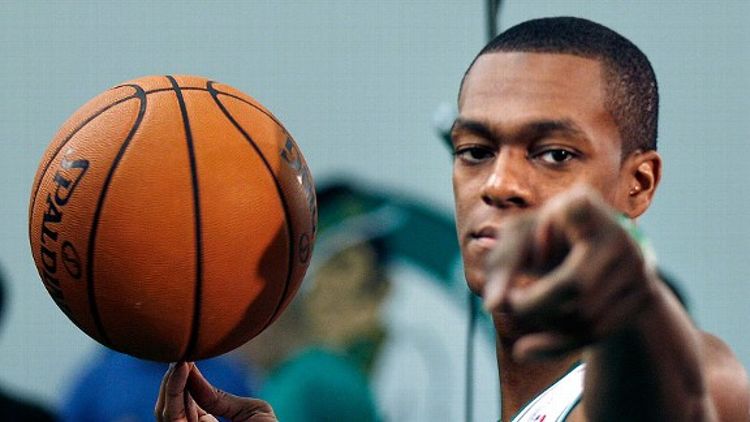 Rajon Rondo, objectively, is a tough player to love. There’s the on-court issues, the on-and-off jumper, of course, but also a maddening tendency to pass the ball once he’s already beaten his man to the rim. There’s the occasional instance of questionably aggressive play: That time he dragged Kirk Hinrich into the scorer’s table, say, or the open-palm smack he once laid down upon Brad Miller. And there’s his default demeanor, which hovers somewhere between a mellow taciturnity and an out-and-out, all-encompassing, game-tape video-screen shattering disdain.

And, then, in his defense, during certain chunks of last season — when he was flirting with an assist average in the mid-teens — Rondo could look like the best player in the league. When he’s on, he’s in total control — even when he’s diving into passing lanes, or madly careening for loose balls. He always busts his ass. It’s thrilling. Watching Rondo kill the fourth quarter of Game 3 of last year’s Miami Heat series (the one where Wade villainously karate dragged him to the ground) with his left arm dangling by his side was my favorite basketball moment of the year. So, yeah, I love him.

Unfortunately, these are crappy times for my dude. While the rumors involving Rajon in a Chris Paul trade never manifested themselves, it wasn’t for lack of trying. Acording to Yahoo!’s Adrian Wojnarowski, the Celtics “relentlessly pursued Paul,” offering the Hornets “as many as eight different scenarios” to get a deal done. Making things worse was Danny Ainge’s awkward denial of the trade rumors: “Rondo knows that we love him. He knows that we like him.” Your team tried super-hard to trade you, and your boss isn’t even really sure if he loves you or not? Rajon, buddy, you have all the right to be so pissed right now.

If you don’t know what I’m talking about, here it is.

It’s a simple, gorgeous bit of misdirection. As he drives to the basket, Rondo cups the ball, then scoops it behind his back, using a freakishly long arm to really drive the point home. With the fake made, he rocks the ball back in time to finish the layup unperturbed. The clip I linked to above is an ideal iteration: Both Brandon Jennings, the primary defender, and Ersan Ilyasova, the help defender, completely bite on the fake, and are reduced to wander the court like two sad, scared schoolchildren left behind on a field trip. As far as I can tell, no one has named the move. So, how about: The Rondo.

The Rondo isn’t always that dramatically effective. In this clip, Rondo still has the 76ers’ Jason Smith on him when he pops out of the pick-and-roll. But whipping out The Rondo makes Smith take a split second to glance in the direction of the ball fake, and it’s all the time Rajon needs to sneak right by.

A lot of the times, The Rondo is about throwing off that bigger help defender. Here, thanks to a quality camera angle, we can see that Chris Bosh is in perfect position to slide over and force Rondo to adjust his shot. But The Rondo freezes Bosh in place; when he commits, he takes a half-a-step in the wrong direction, and Rondo scores easily over Mike Bibby.

Here it is against the Rockets, with Yao taking that same exact half-a-step. Poor guy never stood a chance.

Sometimes, you’re sure Rondo must have travelled during The Rondo. Probably, sometimes, he does. But seeing it in slow motion, here, suggests that for the most part, if it looks like he’s traveling, it’s because he’s packing a lot of action into those two steps.

Rondo can modify The Rondo as well, pulling it out while standing still. Here it is in a tough traffic jam under the basket. It leaves John Salmons’ defense resembling that of a man, freshly concussed, dazing about aimlessly.

Here’s another permutation. This time, instead of cradling the ball, Rondo fakes the behind-the-back-pass by dribbling the ball back to himself just when it looked like he was ready to dish it off. Tommy Heinson’s reaction — “[maniacal cigarette-rasp laughter] Put it in the books, baby! Put it on the reel! [Maniacal cigarette-rasp laughter]” — is correct.

Here, Rondo pulls the move against the Thunder, and is left so open he could have stopped in the middle of the lane, filed his 2010 taxes, and still scored.

Watching the play unfold from behind like this, you can see the appeal on purely aesthetic terms. At times like these, it looks like he’s doing it less to fake a defender than to maintain his own rhythm as he blasts into the lane, so that he doesn’t go too fast and lose control. It’s a gallop that manages to be herky-jerky and graceful at the same time. It almost looks like Rondo is skipping across the floor.

For now, Rondo’s staying put in Boston, meaning Celtics fans will get to guffaw at The Rondo most games this season. For the rest of the league: Watch for that ball fake.

In Which Fake Grantland Writes 700 Words on Rookie of the Year, Angels in the Outfield and Major League II