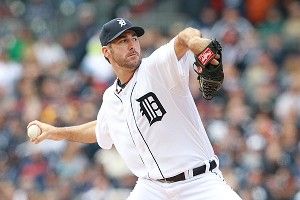 While watching the Tigers sweep the Red Sox this past weekend, a thought entered my brain — more than any other MLB team, the Tigers probably have the best odds of becoming a dynasty this decade. And that thought sickened me.

Normally, I try to sit back and enjoy baseball games, without letting any weird arbitrary preferences make me too happy or upset. Something about a potential Detroit Tigers dynasty bothers me, though, and, this being the Internet — where nothing is good enough and no one deserves to be happy — I couldn’t resist the urge to take a big pee on the Tigers’ parade.

Now, when I say “dynasty,” I mean that the Tigers could run the AL Central for the next couple seasons, possibly even the rest of the decade. Think of the Yankees’ 1998-2006 run or, most famously, the Braves’ record-setting 14 titles between 1991 and 2005. You’re probably thinking, Well, that’s great, right? Good for them! Well actually, no. You’re totally wrong. An AL Central dynasty in the “teens” (or whatever we’re calling this decade) would be a pretty boring, hollow accomplishment, equal to winning a fantasy baseball league or getting 1,000 followers on Twitter.

The AL Central is something of a soft, gooey middle between the tougher East and West divisions. The high-octane Cleveland Indians teams of the ‘90s were the division’s lone instances of elite, sustained success. Last decade, the Twins took home six division titles but were swept in like 100 playoff series. (They really were, I looked it up.) Not to mention the fact that their run differentials in those seasons resembled teams that probably shouldn’t even have been in the playoffs.

Fast-forward to 2012, where it looks like no one in the AL Central has the cojones to stop the Tigers. Let’s take a quick survey of the contenders:

Kansas City Royals: Like Cleveland, the Royals are broke, but the farm system’s highly touted. While their front office accumulates young talent well, many doubt its ability to construct quality teams on the major league level. Plus, sometimes prospects, with all that uncertainty, can be overrated.

Minnesota Twins: Karma’s a bitch. After all that overachieving last decade, the Twins’ current outlook has gone down the toilet. While revenues shot up with the opening of Target Field, there’s not enough talent to compete now or in the future, sending the front office back to the drawing board.

Chicago White Sox: They reside in the division’s largest market, but have the worst collection of under-30 talent. To make matters worse, Kenny Williams refuses to pull the plug and go into rebuilding mode. See the 2012 Houston Astros? That could be these guys in three years … or sooner.

Meanwhile, life has been a pizza party for the Detroit Tigers. Since the hiring of GM Dave Dombrowski, magnanimous owner and Little Caesars founder Mike Ilitch has pumped increasing quantities of cash into the franchise. Fangraphs recently ranked every organization in baseball based on a formula that combined 2012 outlook, future outlook, financial resources, and baseball operations. While the science is far from infallible, they found the Tigers’ fortunes — both recent and for the future — head and shoulders above everyone else’s in the AL Central. If the Yankees are the evil empire, the Tigers have become scary to the AL Central on a smaller scale, like a platoon of Stormtroopers terrorizing defenseless little Ewoks.

What really eats at me here is that this roster reeks of hubris, hubris that the team probably can likely afford not to pay for down the road. The current infield defense, led by Miguel Cabrera at third (!), is an abomination. It reminds me of the amoral world of ‘90s baseball video games, where you could play Frank Thomas at shortstop with impunity because the simulation engine sucked. The combination of Victor Martinez, Cabrera, and Prince Fielder’s contracts would cripple most franchises. While it’s great that Ilitch pours money into the Tigers organization, there’s no elegance in Dombrowski snatching top-flight free agents off the shelf with the reckless abandon of a Nickelodeon contest winner. Still, even if Detroit’s minor league system pales in comparison to Dombrowski’s masterful work in Florida and Montreal, they’ll probably receive just enough of a boost from the farm (namely, potential no. 2 pitcher Jacob Turner and third baseman Nick Castellanos) to outpace their divisional foes a few more seasons, at which point the octogenarian Ilitch will probably be pushing the payroll into the range of a small European country’s GDP.

A year ago, I would’ve told myself to relax about this imminent boring Tigers “dynasty.” I’d reason that Kansas City and Cleveland would rise up and make Detroit pay for their impulsively constructed roster. After all, what the Royals and Indians lack in green, they make up for with superior prospects and savvier front offices. This is what Moneyball was supposed to teach us, right? That these smart, cutting-edge ugly ducklings would eventually turn into beautiful, cost-efficient, pennant-winning swans?

Well, I don’t believe that anymore. Not after all the record-breaking contracts being handed out, the lucrative new TV deals being struck, or that we live in a dystopia where big-market franchises are purchased for TWO BILLION DOLLARS. Oh yeah, and remember how tiny-market franchises could at least gain an edge on the big boys by spending a ton in the draft and international markets? The new CBA killed that strategy. All’s to say is, MLB looks like a game of haves and have-nots, and Detroit, barring any wild changes, seems to be the only have in the AL Central. Yeah, Detroit could be sunk by those big contracts and poor drafts in the same way that, say, the Cubs and Astros are paying for past mistakes, but the Tigers’ financial advantage, at least relative to the AL Central, provides a pretty nice golden parachute.

Now that that’s off my chest, I’d like to add a disclaimer or two: There are plenty of good players on the 2012 Detroit roster and the team is legitimately good, regardless of division; Dombrowski’s made plenty of shrewd moves that didn’t require impulsive spending (drafting Justin Verlander!!!); that the fine people of Detroit totally deserve a winner; that wins are wins and no blogger can take them away from you, even if said blogger finds your roster to be constructed in an aesthetically unpleasing manner.