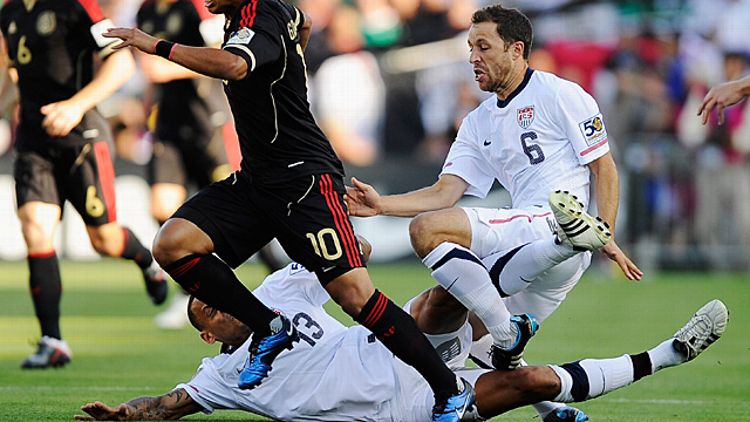 Steve Cherundolo, Tim Howard, Stuart Holden, Maurice Edu, Brek Shea, Herculez Gomez, and Josh Gatt. These are members of the United States men’s national team who missed time recently because of injury. Some of the afflictions are serious, requiring surgery and months of rehab, while some are less dire, but these are all players who have been unavailable at a time when Jurgen Klinsmann would have called.

One of the main reasons Klinsmann used 26 different lineups in his first 26 games as manager was because someone from the first team was almost always hurt. So, is the American squad particularly injury-prone?

It’s difficult to tell. The data for soccer injuries is notoriously difficult to gather, especially in a national team setting. Whereas a Premier League team, for example, at least has some semblance of a set starting XI from week to week, the U.S. does not. Neither does a squad like Mexico, Germany, or any other national team, so it’s hard to tell who they would have brought in but didn’t because of injury.

Additionally, the decision to call up a player takes many factors into account — form, fitness, club season, length of travel to the match, importance of the match, etc. — and a knock is only one. I asked Ivan Pierra, head athletic trainer for the USMNT, how the American coaching staff makes the decision to bring in a player who might be working his way back. “If a player is injured or rehabilitating an injury, it is largely up to the club to determine if a player will be released. National teams do have a right to call in a player regardless and make their own evaluation,” he said. “Generally speaking, we will only ask to bring an injured player in if we feel it would be beneficial to get our opinion.” The U.S. training staff stays in constant contact with players and their club trainers to get the best picture of where an athlete stands.

This very issue is being debated in England right now, as national team manager Roy Hodgson regularly calls up possibly injured players that clubs wish he would just leave be. This recently occured with Wayne Rooney, and is happening now with any number of Arsenal players (Kieran Gibbs, Jack Wilshere).

There are, however, some factors that might lead to national team–caliber players from the U.S. getting hurt more than their counterparts from other nations. One is that the possible number of players is lower. In Germany, a talented player who gets injured frequently when he is young might stop getting chances because he would be replaced by another, fitter teenager. The competition in the U.S. isn’t as fierce, so those players continue in the national team system despite their fragility.

Dr. Damion Valletta, an orthopedic surgeon who has operated on a number of soccer players including Abby Wambach, believes there might be some merit to the thesis. “That could be the vetting process,” he said over the phone. “Those who are going to get hurt, get hurt earlier and get bounced out.”

(A counterpoint to the number theory: As Americans, we pay closer attention to the U.S. player pool, so we know about the injuries of fringe guys. There aren’t more injuries per capita when compared with other national teams; it just feels that way because we hear about an injury to Shea whereas we wouldn’t know about the 32nd-best Spanish player hurting himself.)

Another issue, especially for players based in Major League Soccer, is the distance they travel. Whereas European teams frequently go by bus or train, athletes in the domestic league fly almost everywhere and usually take commercial jets. The Seattle Sounders traveled more than 61,000 miles in 2012. Clint Dempsey recently joined the Pacific Northwest club after leaving Tottenham, whose biggest rival, Arsenal, plays in a stadium that is 3.8 miles away.

“Travel is certainly a consideration when preparing for the risk of injury,” Pierra said. “Travel takes a lot of energy from a player, and the travel schedule of the MLS compared to most other leagues around the world is substantial. If it’s not managed correctly, it could lead to an increase in injuries. Our players wear travel recovery tights and/or compression socks to aid in recovery.”

Everyone in international soccer travels, of course, but American players fly more than most during the season. Even the Europe-based national team members have to fly to Central American countries for midweek matches. That lifestyle takes its toll.

Finally, there’s the issue of growing up in the U.S. where soccer is frequently played on pristine fields in perfect weather. That can be a far cry from conditions around the world. “If you have people from Florida or the West Coast where it’s sunny, and then you bring them to Europe where it’s damp, they could slide or hurt themselves because they aren’t used to the surface,” Dr. Valetta said. That line of argument is a bit of a stretch, but not entirely unreasonable, either.

Valetta and Dr. J. Richard Steadman, who has operated on players including Lothar Matthaus, Alessandro Del Piero, Oliver Kahn, and Ruud van Nistelrooy, said there wasn’t a difference between the type of injuries they see in Americans versus their European counterparts. The knees and ankles are the primary targets, although both noted an increase in the amount of sports hernia operations, which they attributed to increased understanding of the injury and better treatments. “The fact that we have a good repair technique for it may be why we are hearing a lot of people are out for it now,” Valetta said. “Before, we didn’t have a lot of great treatments that got people back in four to six weeks. Now that it’s more popular, players are having it done and returning.” Edu, for example, is currently recovering from the surgery.

When the United States takes on Costa Rica next week, a handful of players will miss the trip because they are hurt. Perhaps the best news for Klinsmann and the squad is that the growing depth of the team means those absences won’t hurt as much as they have in the past. In the end, that’s all you can hope.