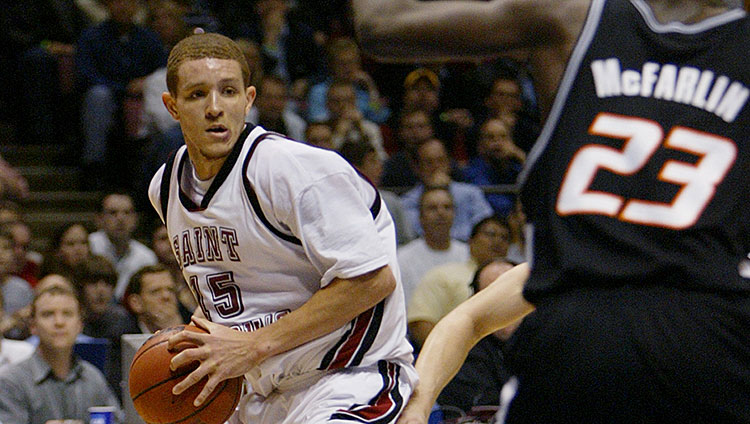 If you’re a Philadelphian, there are few phrases you want to hear less than “Cowboys win.” Growing up, I associated this phrase with names like Troy Aikman and Emmitt Smith, and faces like this …

But in 2004, “Cowboys win” took on a whole new terrible meaning. It wasn’t about the boys in Big D. It was about the young men from Stillwater. That’s the year the Oklahoma State Cowboys knocked out Saint Joe’s Hawks in the Elite Eight of the NCAA tournament.

It was a Saturday. I don’t remember where exactly I was watching this game, though I assume it was in a Brooklyn bar because that’s where I spent the mid-’00s, and I would like to think that on my way to said bar, I was listening to Madvillainy (which had dropped four days prior) on a first-gen brick iPod, because this was Brooklyn, and when the legend becomes fact, print the legend.

I do know I had become irrationally attached to this Hawks team, which was a little complicated. Unless you have familial ties to one of the Big Five schools in Philly, your allegiances can be somewhat convenient and a bit up for grabs (though I cannot recall ever meeting an actual Villanova fan). At least mine were. For the most part, I was a Temple fan. I adored Mark Macon, really liked the subsequent Eddie Jones/Aaron McKie Owls team, and went to college for a year in North Philly in the mid-’90s for the height of the John Chaney–John Calipari wars …

But Saint Joe’s, and specifically Phil Martelli, made me the basketball player I never was. I attended Saint Joe’s summer basketball camp as a kid when Martelli ran the program. I remember my time there really fondly — that’s where I learned to play knockout, and learned I was a bad basketball player — so when he became head coach on City Line, I took notice. And when he ran out his 2003-04 team, with the backcourt of Delonte West and Jameer Nelson, I fell in love.

Despite going 27-0 in the regular season, Saint Joe’s (not unlike this season’s Wichita State squad) never lost that underdog look. In the tournament, the Hawks stomped Liberty in the opening round and got past Bob Knight’s Texas Tech (the Andre Emmett squad) in the second. Tyrone Barley (who would later serve time for armed robbery) put Chris Paul in his pocket in their Sweet 16 clash with Wake. That got Saint Joe’s to the Elite Eight, where it would face Eddie Sutton’s Cowboys, led by Tony Allen, Joey Graham, and — deep breath — John Lucas III. 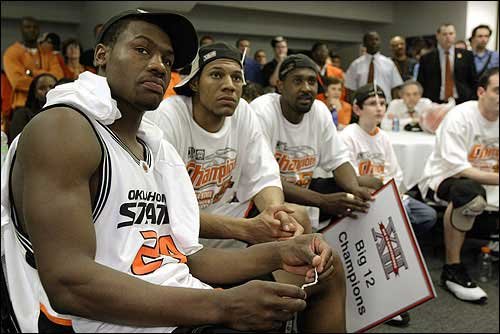 Saint Joe’s was a 1-seed, Nelson was the player of the year, and the game was played at the Izod Center in East Rutherford, about two hours from their campus, but I don’t think anyone really considered the Hawks favorites. Oklahoma State had a bunch of guys who looked like they punched tree trunks in their spare time. They were faster, stronger, and meaner. I didn’t dislike the Cowboys — how could you dislike a school that had been through what Oklahoma State had been through in 2001? — but I didn’t like them. And I was certainly terrified of them on Saint Joe’s behalf.

Things started off pretty well for the Hawks. When you watch it now, the pace is unbelievable, and I still get juiced watching Nelson do that Chris Paul thing where he runs a secondary break into the lane, slows up, throws his butt out, and then lays it off to an arriving Pat Carroll for 3.

But even when it looked like Saint Joe’s might run the Cowboys off the court, with the quasi-home crowd going nuts for every bucket, there was a physicality to Oklahoma State’s play that made me nervous. Ivan McFarlin would just drop dudes on picks. Joey Graham would shake off Hawks forwards like they were flies. A lot of Saint Joe’s points were coming off turnovers. If John Lucas III could get his shit together, the Hawks would be in trouble.

He did. They were.

West and Lucas traded fadeaway jumpers down the stretch; Pat Carroll made a brief cameo as the White Jesus of City Line Avenue, giving the Hawks a one-point lead with 30 seconds remaining. Oklahoma State botched the following possession, and out of the botching, came this:

John Lucas III, with his dad watching from the stands, on enemy turf, rattled it in. Martelli let his best player, the best player, Nelson, take the ball up the court. He had a free run at Oklahoma State and took a decent enough shot — a fadeaway, right around the foul line — but it clanged out. The no. 1 seed Cinderella took 95 back to Philly.

“I cannot speak about Jason Kidd and Lawrence Frank because I do not know it,” said Jackson, who said he still speaks with Kidd. “But everybody has to know who is in charge, and that’s the head coach. He’s the guy calling the shots. I’ve never seen any of the Pips trying to lead. That’s Gladys’ role. Let Gladys be Gladys.”

We Went There: Post-Clippers Game Dodgeball at Staples Center