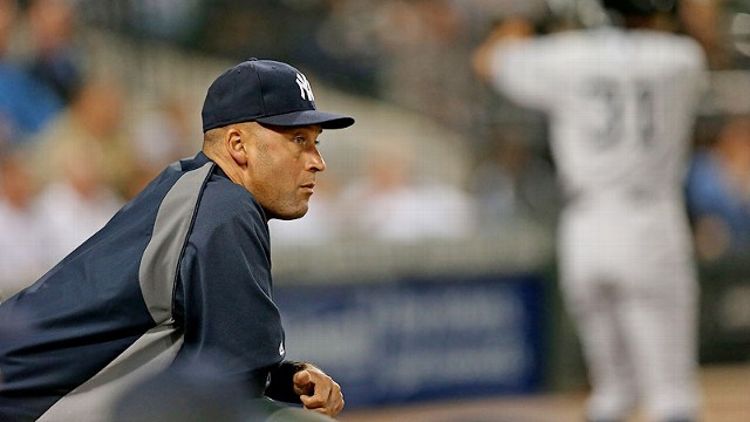 I’ve been back on the field for three games now. All systems go. I’m healthy and finally playing. As far as anyone’s concerned, the quad’s at 100 percent if I’m in the lineup. There are no excuses. I don’t care if it’s the fifth inning and suddenly I feel something warm in my jersey and I peek inside and see that my intestines are exposed because a takeout slide cut me open like a side of beef on a meat hook. You just have to pretend you didn’t see your organs in a weird meaty pile, hike up your belt a few inches to keep everything in place, and take care of business. You stay out there at your position until the third out. Then maybe between innings you can sneak off to the locker room without telling anybody and get the trainer to truss you up with some gauze and athletic tape to get you right back out there as quickly as possible. To do anything less is to disrespect the game and all it has given you.

So maybe you can understand why you’re going to play through a strained quad without making a big deal out of it. It’s against your code to lie about it if you’re asked directly, but there’s nothing in that code that prevents you from pretending you didn’t hear the question because you got distracted by the batboy bringing you your gear, hey, you’re on deck now, better get out into the circle, sorry, Skip, let’s circle back after I score.

And maybe you can also understand why when your manager and your GM ask you to take it easy and play at, say, 65 percent if possible, or not to run out every ground ball like you’re being chased by a hungry bear made of failure, well, that’s just not going to happen. A healthy respect for that failure-bear is what got you where you are, and not even five rings or 3,000-plus hits convinces him not to chase you up the baseline every single time. You’ve seen it eat too many guys whole to do that. You’ve seen the claw marks on Robbie Cano’s back from the times he didn’t bust it down the line. You’ve seen it sitting on top of Joba’s chest and gnawing on his throat in the showers after a messy inning. But it’s never gotten you, and you’re not about to let that change just because you’re worried about reinjury. You can’t play that way, and you won’t play that way. Let them lift you for a pinch runner late in the game if they have to. You’re not taking yourself out.

We leave L.A. tonight with a split in the two-game series. Kuroda was great again. I looked in his eyes as he walked off the mound in the seventh.

That guy’s seen the bear. He gets it.

Every channel in the hotel in San Diego is showing Anchorman. Even the pay-per-views. It’s weird.

I fall asleep during a third consecutive viewing and dream about a bear. I can’t remember if it’s the movie bear or my bear. It probably doesn’t matter. You have to respect it either way.

Grandy’s back. The team’s inching closer to what it was supposed to be all along. It’s been a tough year for him, too, getting hurt when hit by a pitch in spring training, finally returning for a few games in May, and then breaking his finger when hit by another pitch. Maybe last year you would’ve been tempted to blame all the freak injuries this team has suffered on an angry gypsy, especially since the Orioles continue to play well, but this season has had its own curse. And that curse is that its Captain was away for too long. No black magic. It’s that simple. Let Buck Showalter or Joe Maddon or whoever’s managing the Red Sox have a thousand gypsies. We have to take care of our business and not worry about that stuff. The injured guys are all returning and it’s time to start running off a win streak. Beginning tomorrow, because CC had another rough one tonight.

You wish you could figure out what’s going on with him. It’s just not the same pitcher out there. He’s always been the guy who takes the ball out to the mound in the first and won’t give it back to you until he walks off with a “W” in the ninth, but it’s not working out that way. You hate to bring up the weight thing again, but maybe if you’re headed out to war with only half your bullets in the chamber, you’re not going to be able to gun down everyone coming at you. There’s not much you can do but pat the big guy on the stomach after a tough game and ask where he left the other half. Or whisper that his nutritionist is stealing from him. Or leave a love note in his locker from Cap’n Crunch, who misses him terribly and can’t wait to get together for a big bowl of deliciousness. Any of those things should work, but nothing has so far.

But that doesn’t mean you’ll stop trying. Not when the big fella needs his Captain the most. And his Cap’n.

I made the mistake of letting Girardi see me limping a little bit during warm-ups and got the night off. Two nights off, he says, but we’re going to see how that shakes out tomorrow. I’m confident I can hide it from him well enough to get myself back in the lineup Sunday. That shouldn’t be a problem. Some minor calf tightness isn’t hard to work around. I’ve done it before. I can do it again.

I get back to the hotel room and open the curtains to get a look at the night sky. Someone’s written a giant “2” on the window in white paint. Then I notice the blinking red message light on the room phone. I pick it up and hit the button. A whispery recording says “Channel 2” and nothing else. So I turn on the TV and click over to Channel 2.

“I can’t hear you because this is a recording from a secure location, Jetes,” he continues. He tugs at the mask to get his mouth to line up with the mouth hole, which has a stubby rubber cigar dangling from it. “I’m safe. Please don’t worry about me. If you can see this then everything is going according to plan. I am still a free man, Jetes. I will be changing safe houses within the hour. Do not come look for me. Do not ask the TV screen where to find me. Just know that we will see each other very soon. That is my promise to you. They cannot keep us apart.

“It was very expensive to arrange this communication. My DoubleTree points are all gone now. Maybe stick around and watch it again to make sure you didn’t miss anything the first time. This is all very exciting for both of us. End of message, Jetes.”

I click off the TV and sit down on the bed.

I notice for the first time that the giant “2” on the window looks like half a heart.

I turn the TV back on.

Girardi sits me again. The calf’s a Grade 1 strain.

You never want to let your frustration show to the press, but sometimes it’s impossible not to let some slip out. You’re only human and can take just so much bad news in a week. I called this season “terrible” and “like a nightmare.” Which it is. My nightmares have always been about not being able to play baseball. And I keep thinking I’ve finally woken up, but I haven’t. It’s all still the same awful unending fever dream where I’m sitting in the dugout, unable to help my team.

Maybe I’ll wake up tomorrow and the nightmare will finally be over, because all nightmares end eventually.

I’ll find out they’re not putting me on the DL again, that I’m hitting second, playing short.

Because this shit is sort of getting old.

I don’t find out until pregame warmups. I go to check in with Girardi, and immediately I can read in his eyes that the news isn’t going to be good.

I realize how not-good when a heavily armored Hummer bullpen cart, escorted by five smaller security carts, pulls up to home plate. The door to the Hummer swings open and a figure in a Yankee road uniform steps out.

Then I see the rubber Babe Ruth mask. And the cigar.

And the number on the uniform. Thirteen.

He steps up to the plate, waves away the security detail. The carts drive off toward the outfield.

He takes off the mask and winks at me. Then he turns back toward the mound and starts taking his BP cuts.

“He’s got your roster spot, DJ,” says Girardi. “During the appeal. We can’t let you play through a Grade 1 sprain.”

Alex avoids me in the clubhouse before the game, and then again in the dugout, probably realizing the roster move is a little awkward.

But he finally sidles up to me at the dugout fence in the top of the seventh inning.

“I told you they’d never take me, Jetes.”

Then he winks at me again and heads for the Gatorade jug.

“This Gatorade tastes amazing,” he says to no one, draining a cup. “I’ve never tasted something so delicious.”

I may never wake up from this nightmare.