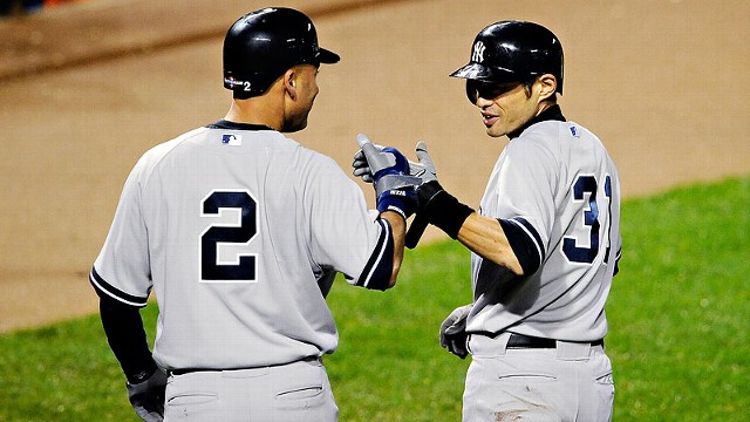 If you’re not careful, it’s easy to let yourself start believing narratives. The Orioles are a Team of Destiny. The Yankees are a dedicated bunch of experienced, professional, fairly compensated superstars who are “too dependent on the home run” and occasionally have some difficulty getting the “big hit with runners in scoring position.” The Red Sox “tanked their entire year, which involved hiring the worst possible fit for a manager and trading away virtually every big name on the roster, just to have the opportunity to hold the Yankees’ fate in their hands on the last day of the season and exact revenge for Tampa’s impossible comeback in Game 162.” You hear these things over and over again as September bleeds into October, repeated by every media member, fan, and suggestible player who spends too much time reading sports blogs. And pretty soon, everyone comes to believe these stories by sheer repetition, especially that last one, which Mark Teixeira wouldn’t shut up about for weeks. You guess a guy starts to get paranoid when a calf strain puts him on the bench for the most important games of his career.

But here’s the truth of the matter:

The Orioles are a good baseball team.

The Yankees finished with the best record in the American League.

We came into tonight’s game needing a win, needing to control our own destinies. You can’t sit around and wait for another team to lose, hoping that things will break your way, even though they almost always do. So here were the Red Sox, standing between us and our march to the World Series, with nothing to play for but an institutional hatred of pinstripes and everything good in the world. You start to wonder if maybe there’s some truth to the narrative, that they’re really in this exact place at this particular time to spring a trap and ruin everything. It’s a tempting thought. There’s a weird comfort in that.

And then Bobby Valentine falls off his bike reading a text message, we basically stopped scoring after 14 runs out of sheer exhaustion, and you realize that maybe this just wasn’t Boston’s year.

In the end, we won when we absolutely had to, Baltimore finally lost a game, and we took the division.

After the game, we had our usual clinching celebration in the clubhouse, and you’ll probably come across pictures of us pouring champagne on each other, but seeing isn’t believing: I make sure those bottles are filled with rancid apple cider. Trust me, it tastes terrible. Joba is still vomiting. You have to remind people that we’ve accomplished nothing yet, that there’s still so much hard work to be done, and that the sweet reward doesn’t come until we’re the last team standing on the field at the end of the season, hoisting Series trophy no. 28.

We don’t have to report to the Stadium until Friday (we won’t even know if we’re playing Baltimore or Texas until tomorrow night), so I took the opportunity to fly down to Tampa late last night and spend 24 hours in intensive preparation at my live/work complex. That’s a luxury I’m happy I can afford with the off day. Today’s itinerary looked like this:

A hard day, but a good day.

Am I ready? You’re never really ready, and yet you always are.

Friday, October 5: Off day, back to New York

You try not to read the papers when you should be doing nothing but focusing on the rapidly approaching first game, but sometimes guys leave them around the clubhouse after workouts and you can’t avoid it. Especially when Swisher is getting all whooped up about something he just saw in the Daily News about the Orioles saying they don’t consider themselves underdogs. Bulletin board material, Swish says.

You know what’s on our bulletin board?

You know what’s on the back of that card?

“Win.” Just in case it gets flipped around for some reason.

That’s all the bulletin board material you need.

Starting the series on the road, in hostile territory, despite having the home-field advantage for the ALDS. A two-and-a-half-hour rain delay keeping Sabathia off the mound. (Luckily, he was able to keep loose in the clubhouse by repeatedly thrusting his arm into a barrel of Cap’n Crunch.) A castoff from the Rockies, coming back from an injury to make his first start in a month, matching your ace into the sixth inning. Nate McClouth and Lew Ford involved in the same scoring play.

You hate to let your mind return to that black magic place again, especially when Robbie Cano tells you he saw Buck Showalter blessing Jason Hammel with chicken bones in the dugout between innings, but it gets tempting. You think you’re rid of that narrative. You’re not. You’ve seen too much to just put it away forever.

And then you push across five runs against their closer in the ninth and all spells, real or imaginary, are broken.

The team was pretty amped up in the locker room afterward, especially the guys who aren’t as battle-tested in the postseason (i.e., everyone on the roster without at least three rings). You let them have a couple of moments to bask in it — there’s nothing wrong with enjoying a big W now that the playoffs have started — but there’s another game tomorrow. And at least one more after that. And then you need four more wins, and then another four wins.

As Captain, you have to remind everybody of that, before Swish gets himself killed by trying to give Rafael Soriano one of his patented “Victory Wedgies.”

So you just walk to the center of the room, silence everyone with a finger across your lips, and then point to the bulletin board.

They get the message immediately.

It’s on the index card.

(Because you brought it with you on the road. A Captain can’t take chances with the availability of index cards in the visitors’ clubhouse.)

You can’t say enough about how important Ichiro has been to this team since the trade. You never want to get ahead of yourself that early in a game, but you can’t help but feel good about things when you’re in the first inning and he pulls out a move at home plate that you’ve never seen before. The guy’s amazing. Back on the bench, I noticed he was giggling, so I ask his translator what’s so funny. “He says he also stole the ump’s wallet on the way back to the dugout. Adding it to his collection.”

But after that, it was nothing but frustrating missed opportunities. Ten guys left on base. My throwing error. A-Rod’s strikeout to end the game.

I see Alex sitting in front of his locker with his eyes closed and a weird smile on his face, so I decide to pick him up after a tough at-bat.

“You’ll get them Wednesday, Al.”

He doesn’t open his eyes.

“The one that ended the game?”

“Oh, that. Moved on. Doing my visualizations for next time.”

“Grounder to third. But I’m getting there.”

“You really get me, Jetes. Always have.”

I’m talking to a couple of reporters when I hear Alex’s scream.

“What’s that about?” they ask.

There’s only one thing on the agenda today: