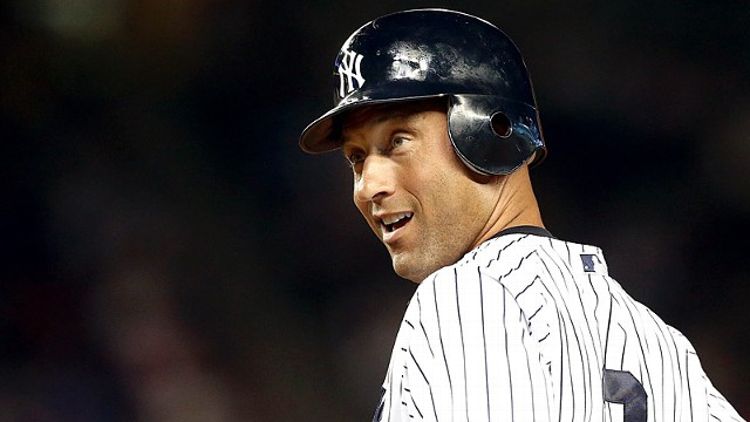 Let’s play two! There’s really nothing better than a doubleheader. Sure, you never get to play them anymore because the owners and Bud Selig don’t want to sacrifice the revenue, and the Players Association rightly protects its members from this kind of reckless, dangerous overwork, but in theory there’s nothing more fun and satisfying than an 18-inning day of baseball. Well, some of the others guys got to play two. Girardi rested me in the first game because he wanted to be careful about my ankle, a decision which, if you know anything about me, I was 100 percent against, because I am not dead, nor even paralyzed from the waist down. My philosophy has always been: If you’re well enough to breathe without extraordinary measures, you’re well enough to play. I wouldn’t even have objected to playing short in Game 1 while seated inside a wheelbarrow pushed by Eduardo Nunez. Sometimes you’ve got to think outside the box in these situations. There’s no page in The Binder that’s going to produce radical wheelbarrow-based solutions like this, I promise you. All that being said, I’m more than willing to take a seat on the bench when it’s in the best interests of the team, which is statistically almost never.

The important thing is, of course, that we won both games. It’s actually doubly important, because Baltimore absolutely refuses to go away. We’ve won four in a row, they’ve won four in a row. You hate to call it “annoying,” because they’re going out there and playing hard every day, and you’d never want to diminish another team’s effort, but mostly because “annoying” doesn’t quite capture what’s going on. It’s more “suspicious” or “eerie.” You look at the Orioles on paper and you’d never pick them to be half a game out of first this deep into the season. And so you have to look for other answers, answers that maybe you don’t want to think about, answers that nonetheless make way too much sense to just ignore.

Yeah, I know. Gypsies. Again. Before you start thinking to yourself, “There he goes, back to the black magic well,” answer one question: What’s more likely: That Baltimore, a team that’s been outscored on the season, but is totally unbeatable in extra-innings, has some kind of special ability to “turn it on” in close games, or that their manager is colluding with the very same practitioners of the dark arts who plagued us earlier this season? You shouldn’t even have to answer that one, it’s so obvious. Let me point out two facts:

1. Buck Showalter was the only manager to ever send me down to the minors.

2. Buck Showalter was the last Yankee manager to fail to win a World Series.

Buck Showalter brought a hex upon himself, and now he will do anything to reverse it. Anything.

You can’t trust Twitter. I barely know what it is, Swish has tried to show me a bunch of times, but I’ve seen enough to understand it’s basically a place where people go to ruin other people’s lives, with no accountability whatsoever. Today some “reporter” goes onto his Twitter and says (I’m paraphrasing, but this is what I was told) “I heard that Robinson Cano drank a vial of Melky Cabrera’s blood, and it will soon be announced that Cano has failed a PED test. Stay tuned.” It should go without saying that this was immediately proven to be completely untrue. Yes, Robbie and Melky are best friends, and both of them were having MVP-type years at one point, but no, there was no failed test, and there was definitely no drinking of anyone’s blood, which is just disgusting no matter how excited Boonie Logan gets about the idea. You hope the Tweet Commissioner suspended that guy for spreading unsourced rumors. No clue where Twitter gets this stuff.

There are so many more important things we could be talking about right now. Like how we just won our fifth straight game. Like how Ichiro’s been out of his mind lately. Or how Swish hit a big grand slam tonight. But no, we’ve got to answer questions about somebody’s weird lies.

For the record: Robbie Cano is not some kind of PED vampire. He just has questionable taste in BFFs.

This is what you live for: the heat of a pennant race that’s going down to the wire. Winning a 10-inning pitchers’ duel on a walk-off homer. Six straight Ws when every single one means something. There’s nothing more exciting, more fulfilling in the world.

And then you look up at the out-of-town scoreboard, see that Baltimore’s now won five in a row, and remember that there’s still so much more work to do. There’s a voodoo-powered flock of orangebirds on your tail, and the only way to shake them is to win every single game for the rest of the season. If you take your foot off the gas for even a minute, they will fly down your throat, eat your heart, and regurgitate it into the mouths of their September call-ups.

I should probably mention that with all this adrenaline, I’ve been staying up a little too late flipping between Animal Planet and Chiller on cable. Whatever.

Let’s do it all again tomorrow.

This is why you never quit: Down four in the bottom of the 13th, after your seventh and eighth pitchers of the game give up three back-breaking homers, you can come right back and tie it all up. And then, in the very next inning, a terrified rookie can miss the third-base bag and squander a game-winning hit, but then you immediately catch a break on an error and win the thing anyway. Baseball, man. Baseball.

Seven wins in a row for us, six in a row for Baltimore. But there’s no time to enjoy the same one-game lead. Somewhere in a dark corner of the Fenway parking lot, Buck Showalter climbs on the back of a kitchen witch’s broom and is whisked away to his hotel room to plot tomorrow’s victory.

They may never lose again. And neither will we, if that’s what it takes. All you can do is show up to the ballpark tomorrow, give 110 percent, and be confident that’s enough to overcome whatever evil forces are being summoned against you.

It’s not all that different from The Rivalry before the Sox hired Bobby Valentine as a scarecrow for their bad contracts, honestly.

Streaks over. Both of them. It had to be this way.

After the game, A-Rod comes up to my locker and tosses a copy of the Post in my lap.

“What’s this about playing for a different team, Jetes?”
“That was about Peyton Manning. See, this is why you never talk to the media. You of all people should know that by now.”
“But the paper says you want to play for a different team.”
“Did you actually read the paper, Alex?”
“You’re the Captain. You can’t just go to another team in the middle of a pennant race.”
“That’s not even what it says in the paper.”
“If you left, I would miss you very much.”
“I’m not leaving.”
“If you leave, can I have Boonie?”
“I don’t own Boonie.”
“That’s not what he says.”
“Yes, you can have Boonie.”
“You’re a great Captain. I’ll miss you.”
“I’ll miss you, too, Alex.”
“If you go to Baltimore, will you let us win the division?”
“I promise.”
“Tell Nick Markakis I said hello. We’re blood brothers.”
“I will. I have to pack my bags now.”
“See you later, Jetes.”
“Bye, Alex.”

Alex walks over to Boonie, puts his hands on both of his shoulders, and begins sobbing.

A big W tonight with Baltimore splitting a doubleheader.

I have no idea how anyone finds time to pay attention to anything else when we’re in the stretch run of maybe the greatest pennant race in the history of the sport, but tonight all people seem to care about is a blown call on Monday Night Football. You never like to see a referee determine the outcome of a game, and the fact that it was a replacement ref definitely makes it seem that much worse, but let’s all take a step back and try to get some perspective on the whole thing.

Our umpires — the regular guys, not even replacements — make terrible, indefensible calls just about every day. And basically nothing is reviewable, so you learn to live with it and just get on with your life. Remember Armando Galarraga? Call us when one of your scabs makes a call so bad it literally erases a human being from history.

Trust me, by tomorrow, everyone will have forgotten. It’ll all blow over.

As Captain, you have to pick up your guys when they don’t come through in a big spot, even when they cost you a chance to pick up a game in the standings and with time running out in the season. So Boone Logan slumps over to me with his head down after blowing a late-inning lead, and it goes like this:

About Last Night: Braves Headed to the Playoffs