Derek Jeter’s Diary: Ducks Have No Place in Baseball 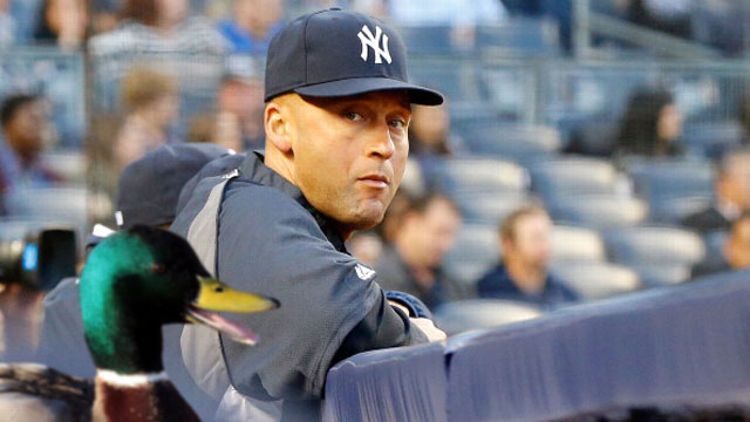 Wednesday, May 1: vs. Houston Astros

When you take two of three from Houston, it’s hard not say “We should’ve taken three of three from Houston” because they’re basically a minor league team, but one of those minor league teams that doesn’t have any legitimate prospects, and will occasionally sign a Jose Canseco or a duck that can run the bases to sell a few extra tickets. Yeah, it’s funny to watch them waddle around and listen to the noises they make, but you’re not really there for the baseball. You’re there for a sideshow. Call me a traditionalist, but I think base-stealing ducks and aging Cansecos have no place on a ballfield. You have to respect the game and put a credible product out there.

But despite the level of competition, two of three wins, that’s a .667 winning percentage. You’ll take it, even if there’s a nagging part of you that says going 1.000 against Houston is what needs to happen. In the one game we didn’t get, they swapped in a trash can at second base as a defensive replacement for the final three innings, and we hit into that trash can four times. You can’t hit the ball directly into an illegal garbage receptacle like that and expect to be where you need to be in September. You have to do better than that.

Thursday, May 2: Off day

Baseball’s always been a game where players will take any tiny edge they think they can get away with. You hate to call it “cheating,” because in most cases, it’s just a player trying his best to win, and winning is everything. Maybe a guy corks a bat (which doesn’t do anything), or a guy loads up on pine tar (which doesn’t do anything), or a guy steals signs from second base (if the center field camera in Toronto is malfunctioning that day). But it’s hard not to put the cheating label on doctoring the baseball in any way. The pitcher enjoys a huge advantage most of the time, in that he can throw the ball at any speed, to any location, in any count. If he wanted to, the pitcher could roll the ball up to the hitter, or throw it behind his back, or put it in his pocket and walk off the mound, never to be heard from again. They have that fundamental element of surprise. They don’t need the added advantage of an extra inch or two of break. It’s just a greedy thing to do. Take the ball and walk slowly into the ocean if that’s where your fight with your inner demons is taking you, but don’t resort to the spitter. It’s not fair to anybody involved, especially the hitters.

So when you hear about a situation where, say, a Clay Buchholz is accused of greasing up the baseball, you’re disappointed. For one, it calls into question the validity of a very hot start to a possible redemption season. Is any of it real? Is that little extra movement on the cutter due to a change of approach, or is it a ball rubbed up with a mixture of sunscreen, rosin, and lies? You don’t want to jump to conclusions without all the facts, but you see video where a guy keeps going to a forearm that’s covered in some kind of foreign substance, and it makes you wonder where he might stop in his search for an edge. Probably short of murder, but you never know, that franchise has always had a flexible morality. “It’s just for grip,” they’ll tell you. But the thing you need the firmest grip on is your integrity. That’s the slogan on the brand of pine tar I endorse, not coincidentally. You’re not going to get those kinds of endorsements if you’re taking shortcuts to success.

Friday, May 3: vs. Oakland Athletics

Saturday, May 4: vs. Oakland Athletics

Look, I’m flattered by the talk that I should be voted into the All-Star game. The arguments are compelling: It’s not my fault I had a setback in my rehab that will probably keep me out until July, I’ve accomplished things in my career that deserve ceremonial recognition, and people want to see their favorite players out there. But the idea that I’d just step back after the fans voted me a starter is totally misguided. If they vote me in, I’m playing. I’ll go out there in my boot if I have to. And the risk of reinjury is far too great if I’m chasing a grounder into the hole while wearing a therapeutic apparatus. I appreciate the thought, but it’s counterproductive for my recovery to be an All-Star this time. Let’s take a rain check. No one wants to see an Indian at short just because they need a representative.

Sunday, May 5: vs. Oakland Athletics

This injury thing is getting ridiculous. This is like the Final Destination of baseball teams — the fill-ins guys have done too good a job keeping us competitive while the starters are out, so it’s like Fate is coming after everybody for defying the master plan. You want to tell Vernon Wells to stay off roller coasters for a while, at least until his average is safely back down to .250. I’ve been watching a lot of cable lately.

Anyway, this time it was Nunez getting hurt. He had to leave the game with some kind of rib cage issue. It’s especially tough because I’ve had a lot of time to mentor him on this homestand. To teach him some of the tricks you only learn after playing in the bigs for more than a decade. To pick him up in the dugout after a bad throw to first. “It’s just one play,” I tell him. “You can’t be afraid to fail. The worst thing that happens is they trade you to Minnesota for a lefty bullpen arm. They have a nice new stadium there, even if that happens. And it probably won’t. They need you till I come back, and maybe even after that.” You just want a kid like him to go out there and stay loose, not tighten up and get hurt.

So the team’s traveling to Colorado to begin a road trip, and all the inactive injured guys went back to Tampa to finish rehab. We’ve assembled the greatest extended spring training roster of all time down here. Rodriguez. Teixeira. Granderson. Youkilis. Ivan Nova. Frankie Cervelli. Michael Pineda. We’ll probably outdraw the Rays by 5,000 per game. That’s not intended as a brag; everyone knows the Rays have had trouble getting fans out to Tropicana Field because of the legitimate fear that they’ll be killed by a falling catwalk. I’ve heard Evan Longoria’s insured for $100 million in the case of a catwalk-related death. The organization learned its lesson after the Carlos Pena tragedy last year.

I’m barely home for 10 minutes before there’s crazy honking outside that summons me to the front door.

There’s a black Maybach parked in the drive. The tinted driver’s side window slides down.

He honks four more times and revs the engine for some reason.

“You like my car?” He revs the engine again. It sounds like a jet clearing its throat.

“I’ve had sex in this car! Can you believe it?” Three honks and a rev.

“Hey, you need a ride anywhere? Wanna go get Chick-fil-A?”

“Anytime you want a ride, you just page me, Jetes.”

“OK, see you at rehab tomorrow!” He rolls up the window, revs the engine, but doesn’t go anywhere.

I wave goodbye and go back inside.

An hour later, I peek out the window. He’s still there.

He sees me and revs the engine.

He does not leave.

Tuesday, May 7: vs. Colorado Rockies

I was just with the team two days ago, and I still had to look up three of those guys.

You never want to complain about injuries because they’re just another part of the game, but you suppose this is what happens when you’ve got $80 million worth of players on the DL.

Wednesday, May 8: vs. Colorado Rockies

A-Rod drove me to rehab.

He was waiting in the driveway with a bag of Chick-fil-A.

The biscuits were delicious.