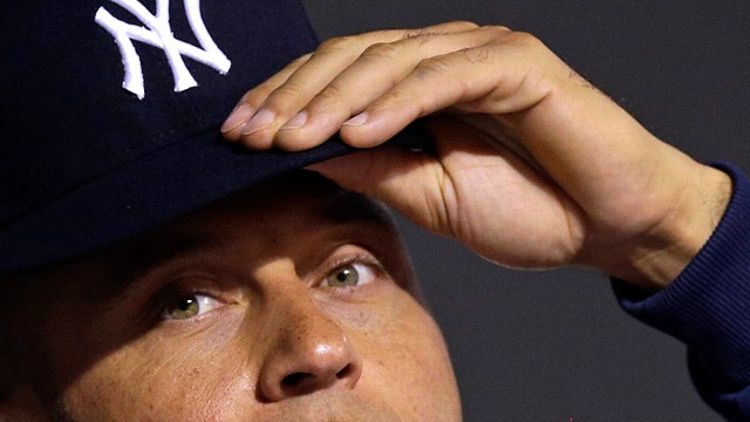 Cashman came down to Baltimore to tell me the news.

He brought the surgeons, the trainers, the psychological performance coach, some other executives. Key guys from the ’96 through 2000 World Series teams. My parents. Several letters of support from my exes. And a World Series trophy-shaped urn that he says contains one-third of Mr. Steinbrenner’s cremains. Hank and Hal were present via FaceTime with the other two-thirds of their father’s ashes, in two identical urns in their two different locations, for security reasons.

He felt he needed all these people around him to create a safe space where he could tell me that I was going back on the DL. Again.

You appreciate the gesture, and the sensitivity involved in going through all that trouble just to let me know that the most challenging regular season of my career was ending. But it was really unnecessary. As Captain, your only motivation is to always act in the best interests of the team. Usually those interests mean taking the field at all costs, even when you’re not at 100 percent, or even in the neighborhood of 65 percent, because in almost every case your presence in the lineup increases the chances of winning. Whatever you might be giving away physically at any given moment is more than made up for in leadership, in the desire to win. You can’t put a percentage on desire. If you did, it would wind up something nonsensical like 1,500 percent. Calculating that is a waste of everybody’s time.

And so I told them: If I’m not helping the team right now, I’m not playing. This is the right decision. The only thing that matters is getting into the playoffs. With a couple of weeks of rest, I’d be ready to get back out there and lead the team back to the Series.

“About that,” they said.

When they said “end of your season,” they meant “also the postseason.”

And at that point you realize why they brought along so many people. Because they know I live for the postseason. For the only games that truly count. They knew what a blow they’d be delivering. What a sacrifice they’d be asking for.

And that’s when my father started crying.

That’s when Jorge Posada stepped forward and hugged him. And when my mom hugged Paul O’Neill, once he started crying.

But I didn’t cry. It’s exactly moment like these when a Captain’s leadership is most important.

So I told everyone to stop sobbing for me. That we have a job to do.

They listened. The eyes dried up and filled with purpose. I could see it happen as I spoke. Chuck Knoblauch stopped throwing up. Mariano Duncan started silk-screening the “We Have a Job to Do” T-shirts, right then and there. He’s always prepared for that; it’s become his thing, and he never goes anywhere without that portable press and some blank Hanes. It’s a nice side business for him.

We all left that room with only one goal: to win the World Series. We also left with some great T-shirts.

I’m grabbing my pompoms. We have another championship to win.

The T-shirts were a huge hit. The team took the field with a renewed sense of urgency. The urgency of every game being a virtual must-win situation.

And so Reynolds and Grandy homered. Soriano robbed one. The new temporary shortstop, whose name I can never remember, scored the tiebreaking run in the ninth.

And so we won.

Up to Boston tomorrow. One game out of a playoff spot.

We have a job to do.

I don’t know what happened, but the T-shirts did not make the trip. Or the Boston clubbies “lost” them. No one got their stories straight. Yesterday we had the T-shirts. Today we did not.

Today we did not get the game we needed. It was all beard-tugs and grand slams.

And then we lost Brett Gardner, probably for the season.

We’ll fight through this. We always do.

If we had the T-shirts I could just point to the slogan. But we all know it by heart at this point.

There’s still no word on the T-shirts. I put in a call to Duncan, just in case they don’t turn up. He promises me we’ll have replacements tomorrow, he’s sending them by courier, he has a guy. I asked if maybe I should have the traveling secretary look into a local printing option, just as a precaution. He was very against that idea. I didn’t push too hard because he sounded a little upset, and I couldn’t figure out if it was that the originals went missing, or that he thought I had doubts about his ability to deliver. But in the end we both agreed to let him handle it; he’s always handled it in the past, and it’s worked out pretty well for everybody. He even offered to send up some actual pompoms for me with the courier — it would be easy to arrange, Yankee blue and everything. I felt good about where we left things, even if I wasn’t totally sure if the pompom remark was a little sarcastic.

None of that is important. What’s important is that there’s another big game tomorrow. It will go better than today’s did. It has to.

The Red Sox had a pregame ceremony to celebrate Mo. This has been going on all year at every ballpark we visit, a nice send-off for the greatest reliever who has ever played or who will ever play the game. The crowd comes out a little early, the host team gives him a chair made of broken bats, or a giant sand-castle version of his head, or some very heartfelt expression of thanks for bringing dignity and class to each game he pitched. You get choked up every time, because you realize your time together on the team is short before he goes back to Panama and spends all his money on his charity work. He might even build 10 churches out of broken bats, by hand. Every ceremony had been special.

But not in Boston. Boston handled it differently. They didn’t kick off the event with “Enter Sandman”; they commissioned Metallica to cover “Sweet Caroline.” They gave him a painting of his return to Fenway in 2005 after his blown save at the end of ’04. They gave him a statue of Dave Roberts sliding into second base. Kevin Millar appeared via Jumbotron to talk about his new casual dining restaurant in Saugus, Millar Time, without even mentioning Mariano before he had to go reset the Big Buck Hunter machine. Larry Lucchino and John Henry showed up 10 minutes late to home plate, handed Rivera a bloody sock hanging on the end of a stick, and left by helicopter right from the infield.

Big Papi read a poem. That was nice. Until the crowd started throwing its collectibles from Jonathan Papelbon Surplus Bobblehead Night on the field. I don’t know why you’d schedule that at the same time as your Mariano Rivera tribute. That just seems like poor planning. Even after all that, he left them a nice message on the bullpen wall: “Last to wear no. 42, thank you for everything.” John Lackey took the Sharpie and turned the 42 into a 69. None of it fazed Mo — he can smile through any situation — but the disrespect is shocking. All you can do is shake your head. Even Detroit put on a nice celebration for him before the rolling blackout hit.

It was hard not to have that disappointment carry over into the game. And it did. We have to play better.

Also, the T-shirts never arrived. Duncan said his courier stopped returning calls. Shortly after, there was a suspicious eBay sale of 40 authentic “We Have a Job to Do” beefy tees. This stuff can’t be happening.

There are games to win. Time is running short.

En route to Toronto. You have to hope the locals are more honest there. Canadians, though. Chances are good.

Shut out. With Pettitte on the mound, pitching his guts out. He’s a warrior. This just can’t happen, especially against a team that’s got nothing to play for. But you can’t go out there and make your guys fight any harder. You’re on the bench. All you can do is shake your figurative pompoms and hope that everyone realizes the enormousness of the moment, raising their level of play.

After the game, A-Rod finds me in the training room. He closes the door behind him.

“I have an important question for you.”

“Will you help me plan my farewell tour?”

“Are you retiring, Alex?”

“Then what are you talking about?”

“What should they give me?”

“The teams decide that on their own, Alex.”

“I wouldn’t want to leave it to chance. I’ll provide them with a list.”

“That’s very thoughtful of you.”

“It should be something appropriate to my legacy.”

“They should gather every living pitcher I homered off of on their mound. And I’ll circle them at full gallop.”

“That detail is not important. Full gallop is important, Jetes.”

“A trot is not intimidating.”

“I like this plan, Jetes. Thanks for your help.”

He turns quickly to walk out of the room. Something whips my leg.

At first I think it’s a towel. It’s not the towel.

He’s using the towel to cover up something on his lower back.

Probably not a tail.

They say “WE HAVE A JOB TO DO” on the front.

On the back: “YONKERS QUALITY TOWING.”

He tells me his guy can probably get something else in there below the towing part. They’ll be great.

They will not be great, I tell him. You have to do better.

The entire lot of old shirts has sold on eBay for $69. Username jlacks69.

We really need this game tonight.