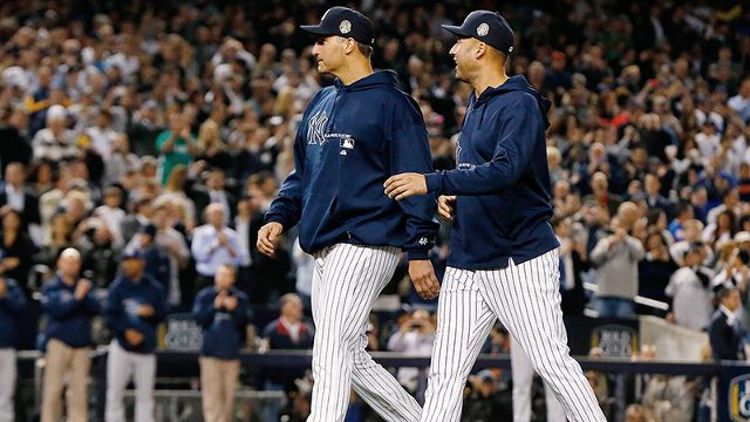 You wanted it to be a special night.

You wanted it to be perfect for Mo. Because more than anybody, he deserved it.

You wanted that last moment on the mound, in front of the Yankee Stadium crowd, to stay in his memory forever. For him to hear the roar of the home fans every time he closed his eyes. For it to be the moment he always dreamed it might be.

And then for the reality to be even better than that.

So we did our best for him. We had the voice of Bob Sheppard announce him as he jogged in from the bullpen. We called him into the game in the eighth instead of the ninth, with guys on base, to put him in the kind of situation where he thrived. And he got out of the inning. Not a scratch on him. Like he always has.

In the ninth, we took him out with two gone. Girardi sent Andy and me to go get him. The remaining members of the Core Four, out on our field together for the last time. You could see the tears immediately begin to well up when Mo saw us coming. And then when we stepped up on the mound with him, the waterworks started. Mo buried his head in Andy’s shoulder and really let go. And then cried into mine as we hugged.

With Mo still holding me tight, I looked up into the stands. There was not a dry eye in the stadium. 50,000 people crying along. And who knows how many millions more at home, watching on their TVs. One hundred million, I’d guess. Including the highlight show audiences. A lot of people, all over the world.

And for just the briefest moment, I imagined what my own last moment in New York would be like. Mr. Torre sending Joe DiMaggio and the Mick out to get me at shortstop. I look around and there’s Jorgie behind the plate. Yogi sitting on his shoulders, for some reason. Scooter Rizzuto beside me. Mo trotting in from the pen. Babe Ruth running in from right. Andy and Conie and Whitey on the mound, kicking at the rosin back. Gehrig clapping his glove at first. Reggie stirring a drink in the dugout.

Then I realize this is happening because I’m dead. I’m going to die on this hallowed field. That’s the only way I’m going out. That’s how it’s going to be. A True Yankee burial right there on the edge of the outfield grass. A pinstriped gravestone marking the 6-hole, with a big no. 2 chiseled on it. Here lies The Captain. He wanted to win.

But I’m snapped back to the moment by something Mo says to me and Andy. Something whispered, something choked through the tears.

He pulls us in a little closer.

“We’re not going to the World Series this time.”

He hugs us even tighter.

At that point it was impossible to tell who the tears belonged to.

They belonged to us all.

Nothing about this makes sense. Finishing up a season in Houston, now an American League town. Playing meaningless games in a ballpark with a train chugging around the outfield. Couldn’t they have canceled this series? Couldn’t they have allowed us to finish this cursed season with some dignity?

And then to add insult to injury, they booed David Robertson for not being Mo. Because Mo left it all out on the field in the Bronx. Because that’s where he wanted it to end. You understand that they just want to see the great Mariano Rivera one last time, but what did they expect? For Mo to ride the choo-choo? The greatest closer of all time is not your choo-choo conductor. Show some respect for his decision to end things on his own terms. He’s happy to sign some model trains after the game.

We’re back in the visitors’ locker room after the game when I notice something on top of my locker. A crow. A very large crow. How does a crow even get into a major league clubhouse? It caws at me and I notice there is a tiny scroll tied to its leg. I pull it off and read it:

I am to retire after next season.

Soon I must name a successor.

That successor shall be you.

I borrow a pen from a clubbie and respond immediately, writing on the back of the scroll.

Thank you for writing.

I’m flattered by your note.

But I am going to die out on the field. As shortstop for the New York Yankees.

After the last out of a World Championship.

I have more baseball to play.

I tie the scroll back onto the crow’s leg, take it outside, and send it on its way.

The gift basket will arrive by UPS. It is too heavy for the crow to carry.

Andy Pettitte gutted out a complete game for the last start of his career. At 41 years old. In the city where he briefly played during the dark period when he was on a hiatus from his true Yankee family.

You really can’t write a better ending for him. Unless it involved pitching his last game in Yankee Stadium, in front of the fans who truly loved him, instead of this place with the weird hill in center.

Still, it was OK. I guess. If you’re from Texas.

Mo and I joined Andy out on the mound after the final out.

And he pulled us close.

“We’re not going to the World Series.”

There were no tears this time. We were all cried out.

“What the fuck is this Houston shit?” someone asked.

It was impossible to tell who asked the question.

That question belonged to us all.

Here is the starting lineup of that ghost game:

No Soriano. No Ichiro. No Gardner.

No Mo. No Pettitte.

The game went 14 innings. Of course it did.

We won. The fist-bumps were half-hearted. At best. The knuckle-touches of survivors.

It’s exactly midnight when I’m awakened by the sound of a helicopter. At first I try to ignore it, but the noise never fades. It’s too close by. It’s like it’s in the bedroom with me.

So I get out of bed to investigate. I follow the whirring until I find the source. It’s right outside.

I step out onto the balcony.

And the helicopter rises up to meet me there. It hovers just yards away, almost close enough to touch. You almost want to reach out and touch it, but then you remember all those dangerous blades.

The back end of the helicopter is shaped like a horse’s hindquarters. Legs and all, as weird as that looks on the tail section of a helicopter.

And the cockpit resembles a man’s head. A man I know very well. Too well.

It is a very disturbing helicopter.

There’s a blast from a bullhorn mounted on the cockpit:

I know that I shouldn’t. But the pilot reaches out a hand, beckoning me to board.

And so I do. I notice that he’s wearing a Yankees batting helmet. The number 13 is emblazoned on the side.

He doesn’t speak to me the entire trip. A very short trip that ends with the helicopter landing on a ballfield in the North Meadow.

I step out of the helicopter. Its spotlights are blinding.

So I can only see the outline of what stands before me.

The silhouette of something much larger than me. Something standing on four legs.

Something that then steps out of the blinding light so that I can see it in its full glory.

“Thanks for coming, Jetes.”

He’s bare from the waist up. Chiseled like he’s made of granite.

From the waist down … also chiseled.

“I’ve been waiting so long to hear that, Jetes. Means a lot.”

He’s holding a Louisville Slugger like a scepter. A small, carved image of his head sits on the top of the bat. He swings it a couple of times like he’s getting loose in the on-deck circle.

“Why would you do that?”

“I’m going to settle for a year. It’s going to take a season off for me to master this.”

He rises up on his back legs. His forelegs kick wildly in the air for a moment before they crash down to the grass beneath him. The whole display is a little clumsy.

“And when I’m back I’m taking the record.”

“I don’t care for your tone, Jetes. I am a proud creature.”

He rises up on his hind legs again and swings the bat in a circle above his head.

“I would never trifle with you.”

“I just need one thing from you, Jetes.”

“A promise not to retire before I get back. I need you to be there when I take the records.”

“You never think that far ahead. You always just take it one year at a time and see what happens.”

“This saddens me, Jetes.”

He turns his face away from me. I hear what sounds like a sob. A sob being choked back.

There’s a scream. A scream that’s both not human and more than human. The scream of a proud creature in anguish.

He breaks the bat across his chest and throws the pieces at my feet.

Then clomps off into the night.

I don’t remember how I got back to my bed. I don’t even remember falling asleep. Maybe I never woke up in the first place.

I only remember that sound before Alex sprinted off.

It was the sound of a season dying.

The sound of our season dying.

We never became. We just cried on that mound in New York.

But next year, we celebrate.

Next year: World Championship no. 28.

Write it in pen.

Chisel it on my gravestone. I don’t care.

I’ve never been more sure of anything in my life.