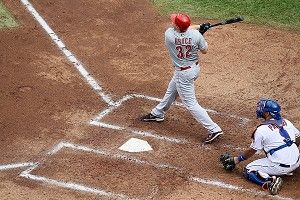 Batter up, degenerate gamblers! Baseball is back. I feel like I’m in the minority, but I still enjoy the pureness of a baseball game. It is as uplifting as watching a Kardashian getting flour-bombed by a nutcase animal activist. Except for Khloe. She’ll always be special to me.

Anyway, unbeknownst to many fans, the season has already started. Yes, they’re counting that nonsense untelevised two-game series in Tokyo. (Question: If two wretched baseball teams play a game overseas and no one is there to see it, did it really happen?)

Moving on … it’s time to play my version of Moneyball. The kind where you spend dozens of hours researching the strengths and weaknesses of Major League Baseball’s 30 clubs, and dump a ton of cash on a few sure-fire, season-long propositions in the hopes that come October you’re doing a curtain call on your theoretical bookie’s front lawn. Here’s what I came up with.

Tampa Bay Rays to win the World Series (16/1)
What’s not to like about this team? They have a rock-solid quartet of starters in James Shields, David Price, Jeremy Hellickson and Moore — much more! A full year out of newbie Desmond Jennings and the return of Carlos Pena should be enough firepower to protect Eva Longoria in the meat of the order. With the extra wild-card spot, Tampa Bay is a shoo-in to make the playoffs. Good odds for this much talent. And the best thing about this wager is you get to root against the dreaded Red Sox and Yank-mees.

Jay Bruce to win the home run title (20/1)
These are Jay Bruce’s home run totals over the past four years: 21, 22, 25, 32. Anyone else see a pattern here? This means in the year 2032, he will be good for 87 home runs. Don’t let the slimmer physique fool you. I watched him this spring, and the power is still there. This time — and this time only — I’ll trust the guy with two first names.

New York Mets under 71.5 wins (-115)
Let’s see … our perennial All-Star third baseman is already struggling to stay healthy. Our budding star first baseman is battling Valley Fever. Our reliable knuckler warmed up for the new season by writing a tell-all about how the nanny used to grope him. The icing on the cake … we moved the fences in. Wonderful news for a staff that already ranked 13th in the league in ERA last season. High 60s is a more realistic win projection. Either way, I won’t be happy until they bury Bernie Madoff underneath home plate in Citi Field … but only if it happens this week.

San Francisco Giants over 87 wins (-115)
Big bounce-back year for the boys in the Bay Area. Angel Pagan, Melky Cabrera, Buster Posey, and Aubrey Huff. That’s a nice way to start every game. Their starting arms are in even better shape after the Matt Cain signing. I promise this is a good wager. So long as Buster doesn’t play human battering ram and the rest of the division sucks like it should, your wallet will be as thick as Brian Wilson’s October beard.

Jose Reyes under 176.5 hits
Any die-hard Mets fan can tell you how this one turns out. Reyes ended up with 181 hits last year and that’s when he was trying his hardest to secure a mega-long-term deal. 2012 is not a contract year, which means Marlins fans can look forward to plenty of days off due to pulled hamstrings. And his isn’t the only leg he’ll pull. Not to mention if Reyes has got the batting title wrapped up in late August, he could very well sit the last 30 games. Go under.

Mariano Rivera over 33.5 saves (-115)
Just like Taio Cruz — I throw my hands up in the air sometimes. Especially when trying to figure out Mariano Rivera’s mystique. I just don’t get it. He’s a 95-pound elderly man. If the guy from the Six Flags commercial started painting corners, you’d be amazed, wouldn’t you? Not sure how this freak continues to be so dominant. I am sure that in eight of the last nine years he’s posted more than 33 saves. This year, I’m going to be on the right side of his save over/under.

Caution: The following are as phony as an ejected Bobby Valentine’s disguise.

Over 135.5 crappy fantasy baseball trade offers I’ll receive before Easter
Lopsided trade offers infiltrate any fantasy league, but it seems like they’re never more prevalent than in fantasy baseball. Especially with the chuckleheads I deal with. Wait, you’re offering me Omar Vizquel, Joel Hanrahan, and three minor leaguers for Troy Tulowitzki and King Felix? Where do I sign? And don’t worry — I’ll figure out how to trim my roster so I don’t have three extra players. Ugh. I’m dreading it already. Remind me — why do I play fantasy baseball again?

47/1 odds Magic Johnson gets fed up with his team, cancels the season, and turns Dodger Stadium to a giant drive-in movie theater
I could see it now — the biggest Magic Johnson Theater yet. About 37,000 pimped-out automobiles idling as people try in vain to hear the top-notch dialogue in Boat Trip over the constant chatter. In fact — why wait for a Dodger collapse? Do it now, Magic!!

32/1 odds Joba Chamberlain tears his ACL in a freak bounce house accident
By the way, Joba, if you had watched even one episode of The Man Show, you would’ve known how to properly jump on a trampoline. For future reference:

Even odds that Marlins manager Ozzie Guillen and starting pitcher Carlos Zambrano kill each other during the 2012 season
Why do I have a feeling that every pitching change involving these two is going to resemble a scene from Scarface?

3/1 odds we find out that after all these years, ESPN analyst Tim Kurkjian’s voice has been Auto-Tuned
I look forward to his next collaboration with Lil Wayne.

I’m setting the number at a solid 1.

Yes — she is my cousin and yes this is real. As you can tell bizarrely inaccurate sports prognostication runs in the family.

That’s that! Time to cork my bat.