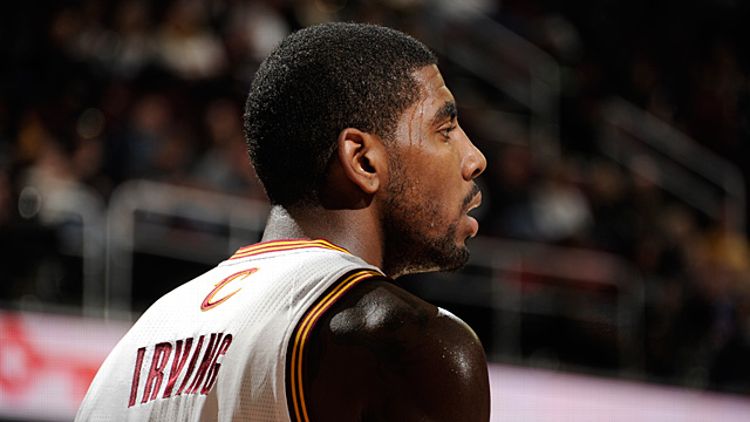 Welcome to If City. As the season opens, no team in the league has a higher ceiling and a lower floor than the Cleveland Cavaliers. If all goes well, they’re a playoff team; if it goes wrong, they’ll be back in the lottery. Let’s take a look at the best-case and worst-case scenarios facing the Cavs and a few of their key players.

The biggest “if,” both literally and physically, is Andrew Bynum. Although some would argue that Bynum’s health isn’t technically iffy because his knees are definitely broken down and he’s going to miss opening night, the Cavs believe he can play effectively again. There is no timetable for his return, but Bynum is currently playing basketball again, often in 3-on-3 half-court games with his teammates. After one such game, a local reporter quizzed Anderson Varejao about Bynum. “I’m not a doctor. He looked good, but I don’t know his knees.”

If Bynum gets healthy and is able to return at a level resembling his past glories, it immediately changes the whole culture of the basketball team. Mike Brown is a defensive coach, and Bynum provides him with a legitimate stopper in the paint. Varejao (whose health is another huge “if”) can focus more on contesting shots and grabbing rebounds, and in turn Tyler Zeller becomes a garnish as opposed to a main course. “When healthy,” Andrew Bynum is one of a few guys in the league who can go toe-to-toe with dominant NBA bigs like Dwight Howard or Roy Hibbert. Without him, the Cavs’ interior defense is much less daunting.

Bynum can also be a really valuable interior scorer. In 2011-12 he put up 19 points per game on a team that also featured Kobe Bryant and Pau Gasol. Still, people around the league are doubtful that the old Bynum will ever come back. That’s why there was no real competition to sign him. Simply put, Bynum is the biggest question mark in the league. Knees are still knees, and that reality has killed many potentially great NBA seasons recently; just ask fans in Oklahoma City, Chicago, or Boston. 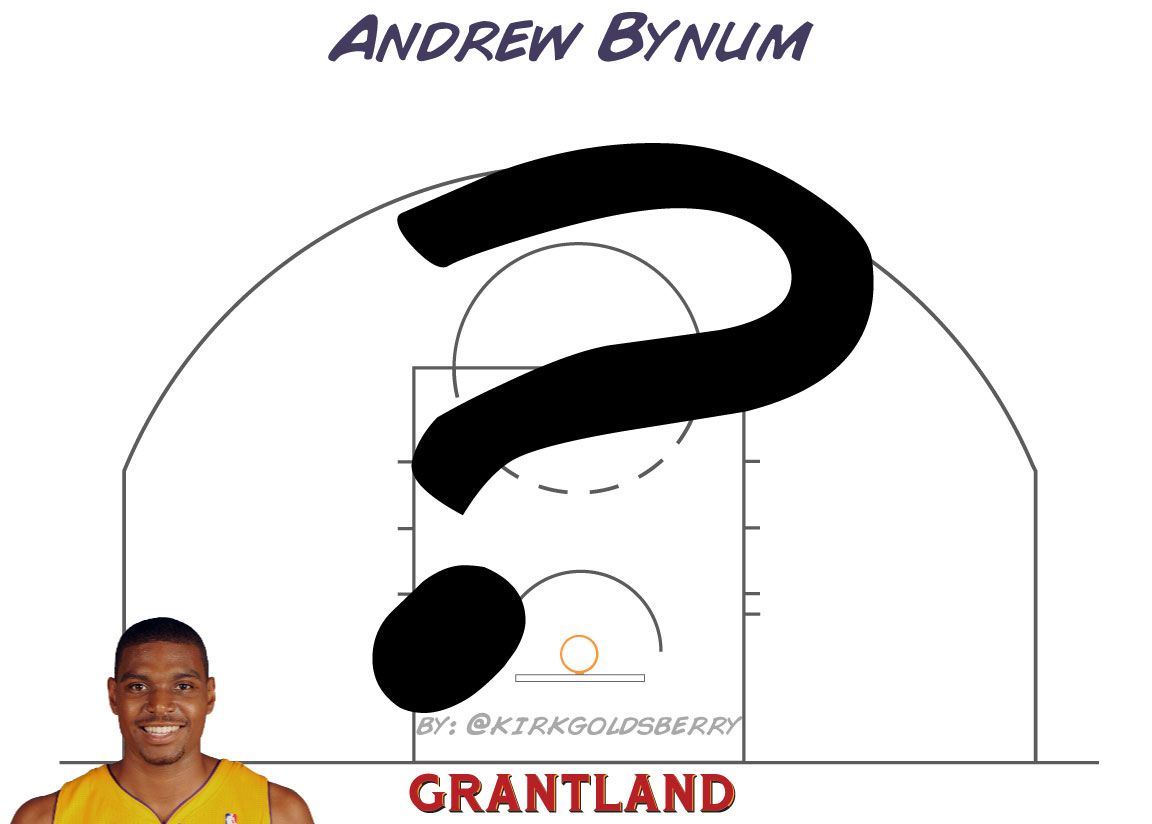 The second big “if” also involves health; Kyrie Irving may be the star attraction in Cleveland right now, but he has a problem staying onstage. Going back to his time at Duke, Irving has had a depressing pattern of injury woes; it’s no wonder he has an arthritic old man as an alter ego. Based on his track record, it would be foolish to assume that those missed games are a thing of the past. From concussions to shoulder injuries (on both sides), a broken hand, and a broken jaw, Irving has had way too many bumps and bruises for his age.

Still, if he escapes the injury plague, there is little doubt that he is one of the best young guards in the league. He’s a natural playmaker with the best handle anywhere on earth. He is an absolute treat to watch play (offensive) basketball. If that’s not enough, he’s already a great shooter with the rare ability to hit long jumpers off the dribble — a key trait that older “elite” point guards still yearn for. 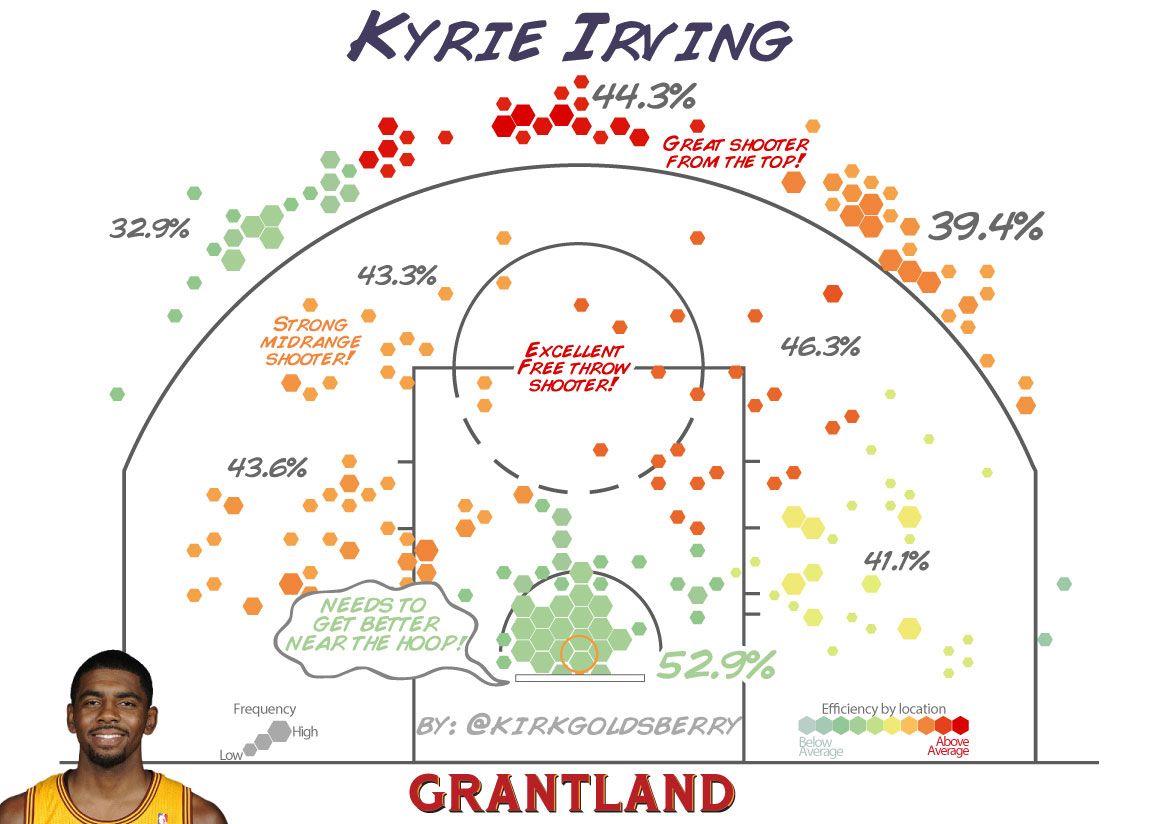 With Irving leading the way, the Cavaliers have a potentially great backcourt, but a couple more things have to fall into place. Second-year shooting guard Dion Waiters must improve. He showed flashes last year — but many of these flashes were frustrating, including a brilliant moment against the Spurs that was immediately followed by a defensive lapse. As a scorer, Waiters has the right tools, but he needs to improve his efficiency, which many players do in their second year in the league. 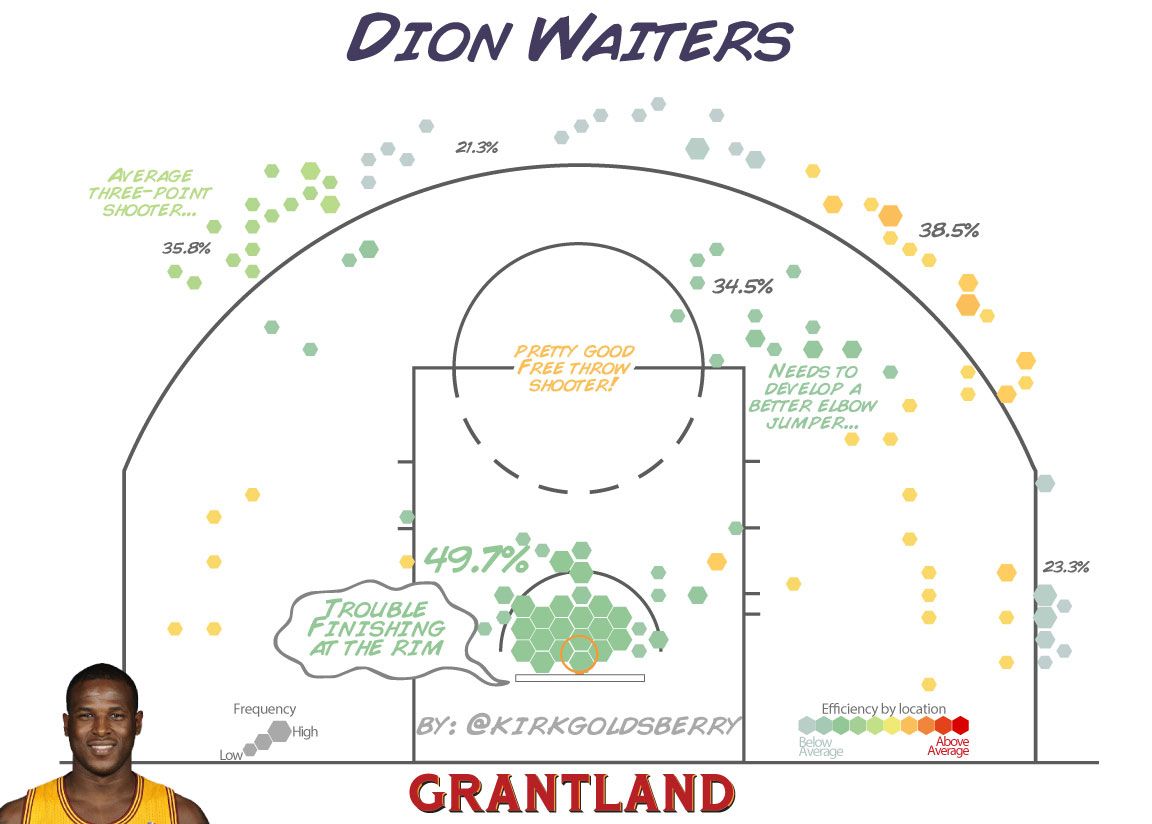 Regardless of whether Waiters makes “the leap” this year, Cleveland’s backcourt will be better; in one of the sneakiest acquisitions this summer, they landed one of the league’s undervalued scoring threats. For years, unbeknownst to most fans, Jarrett Jack has been knocking down midrange jumpers at ridiculous rates. We all saw just how good Jack can be in the Warriors’ playoff push last season. As a backup guard, Jack provides the kind of reliable scoring that most starting guards in the league can’t even muster. He also provides the team with a solid insurance plan if (or, more aptly, when) Irving misses games. 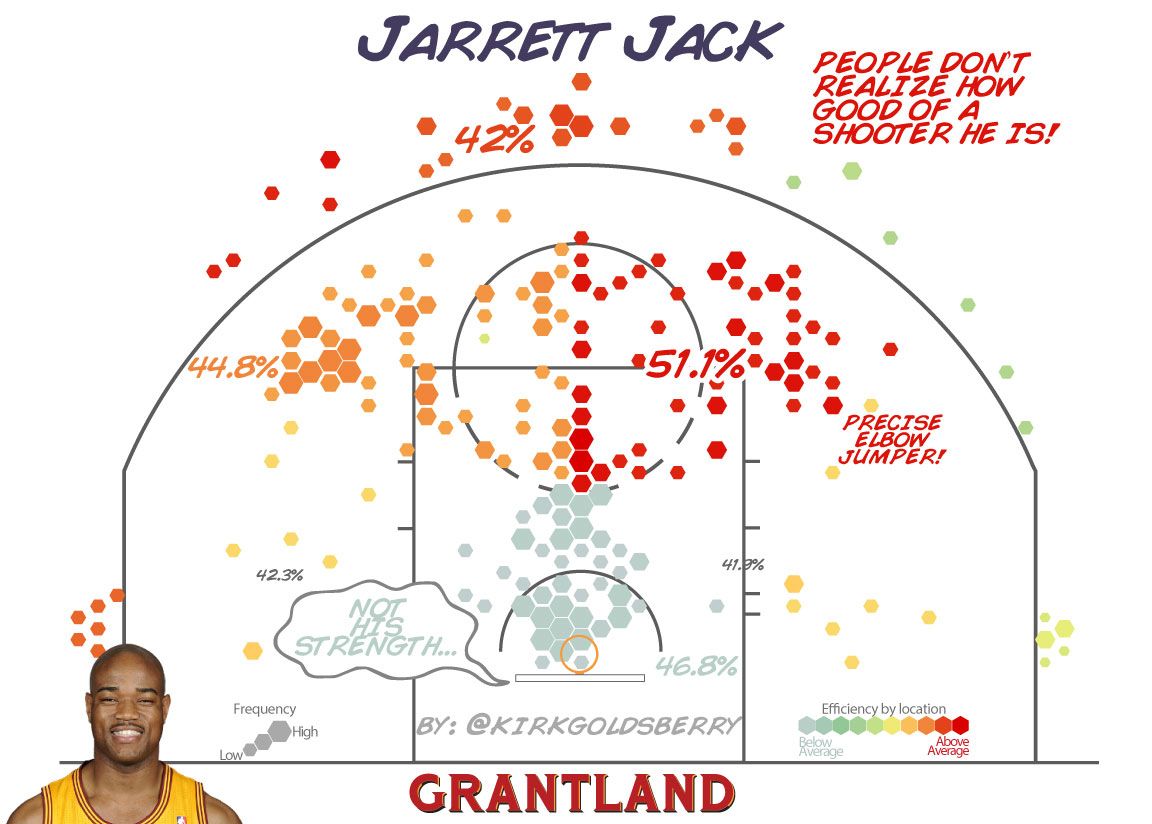 Sure, Jack has trouble scoring near the basket, but he’s one of the best jump-shooting guards in the NBA.

The Cavs also had the no. 1 pick in the draft last year and shocked the basketball world by selecting Anthony Bennett. Bennett is a great athlete, but there are a lot of valid questions about what exactly he will bring to Cleveland. Critics argue that he is too big to be a 3 and too small to be a 4, and the Cavs will have trouble finding spots for him. But his wingspan makes Jay Bilas excited and his ability to score at the rim fills a nice gap in the offense’s portfolio. Some have expressed concern over the combination of Bennett’s weight and diet, and he’s already nursing a knee injury. One person close to the team told me, “He’s nowhere close to being in physical condition to play a lot of NBA minutes.” 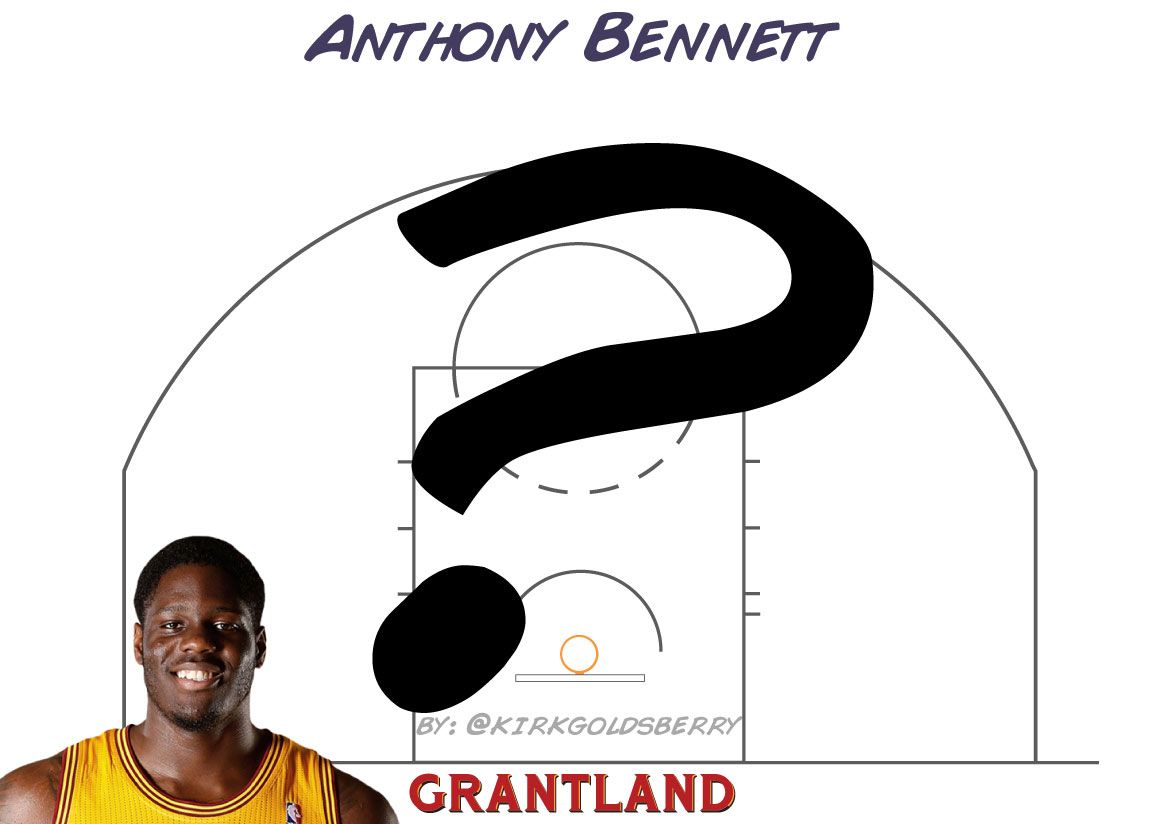 We haven’t even addressed Mike Brown’s suspicious offensive tactics, Tristan Thompson’s bizarre ambidexterity, or Anderson Varejao’s own serious injury problems. Still, the Cavs are in a much better position this year than last, and if things fall into place, they will have a really good center, a great young point guard, a potential Sixth Man of the Year, and really athletic role players. Mike Brown has the potential to develop a strong defensive identity and Kyrie Irving seems poised to lead a much-improved offense. However, there are many reasons to be skeptical, and many of them are unfortunately located in the trainer’s room. Regardless, one thing is certain: Nobody has any idea what’s going to happen with these guys this year.