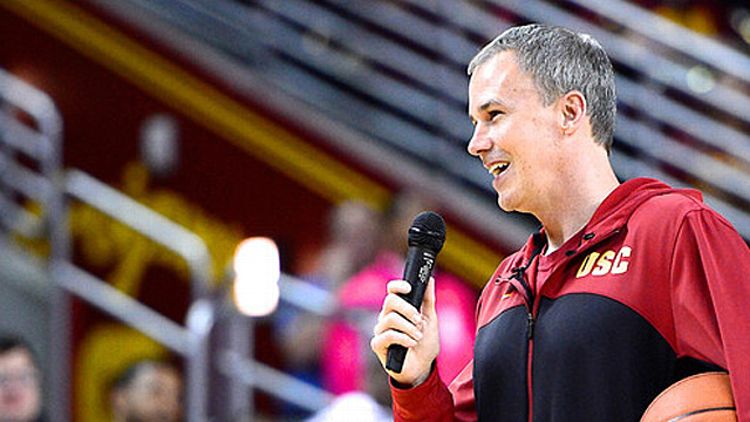 Five years ago, former USC men’s basketball coach Tim Floyd told the Los Angeles Times he was canceling the Midnight Madness event the team had hosted for the past three years. “I want to go have a real practice and not a carnival atmosphere,” he said. “I guess I figure we’re on TV enough, there’s enough other stuff going on in our city now, we don’t need it. We did it, we loved it, I just prefer to have good practices.”

Sure, at the time, the formerly sleepy hamlet of L.A. had been recently enlivened by $1 Taco Nights at Malo on Mondays and a reunited My Bloody Valentine assaulting the Santa Monica Civic Center, but depriving fans of copious Trojan gear giveaways and slam dunk contests seemed harsh.

Of course, the team was also coming off allegations that already NBA-bound freshman phenom O.J. Mayo had received improper cash and gifts while on the team, charges that eventually caused USC to nullify all its wins for the 2007-08 season. The Trojans still made it to the NCAA tournament in 2009 — possibly because of that one extra practice Floyd demanded — but the coach was soon implicated in the Mayo controversy. With other parts of the program totally crapping out, he resigned that June.

Kevin O’Neill, considered by most to be a heinously boring coach, replaced Floyd. Things didn’t get any better, with O’Neill overseeing a 6-26 run in the 2011-12 season. He was fired in January 2013. During O’Neill’s time at the school, not one season started with a randomly chosen undergrad hopefully, deliriously launching a ball toward the hoop from half court. There wasn’t even a opportunity for hardly believable glory.

Three days after the end of Florida Gulf Coast’s improbable run in the 2013 NCAA tournament, coach Andy Enfield was hired by USC. Nicknamed “Dunk City,” his Fort Myers team defeated Georgetown and San Diego State — nos. 2 and 7 seeds, respectively — with a barrage of 3-pointers and rim-rattling dunks that gave viewers NBA Jam flashbacks. The hope was that Enfield would bring this kind of energy to USC, giving an identity to a program that has long stood in the shadow of the school’s usually dominant (if currently struggling) football team.

On Sunday, USC hosted Trojan Tip-Off to introduce Enfield and the highlight-factory style he preaches. Instead of trying to gather a riled-up crowd during the witching hour, USC’s alliterative opening was held on a foggy late morning at Galen Center. (The event also served as an introduction to the women’s team and its similarly fast-paced new coach, Cynthia Cooper.)

There was a carnival-like atmosphere at Trojan Tip-Off, but one more in common with actual carnivals people go to, not the raucous and detrimental ones that Coach Floyd feared. This was a family event for a crowd of a few hundred people, filled with elementary schoolers and aging boosters in Trojan-themed Hawaiian shirts. In the corridors outside the court, there was remote control car racing. There was face painting. There was a bouncy house with a slide. There was someone from KDAY standing in front of a pair of CDJs playing a premade mix of back-in-the-day, radio-edited hits from Xzibit, Bubba Sparxxx, and Fat Joe. There was free popcorn.

At the center of these preliminary proceedings was the men’s team, goofing off together in clumps and trying to teach each other the Kid 'n Play kick step. When approached, they would gladly break off to sign an autograph or pose for a picture, always nonchalantly throwing two fingers up toward the camera. They seemed like nice kids, not too far removed from the ones they posed with who were trying to make their smiles look natural.

The team was scheduled to play a 20-minute scrimmage, and the seats in the stands were only about one-fifth filled. After the player introductions and T-shirt tossing, the pregame shootaround began. “Shoot” is a loose term; right away there were between-the-legs dunks with players hanging on the rims.

There have been suggestions that USC’s hiring of Enfield was an effort to capitalize on the success the Los Angeles Clippers had with their “Lob City” identity. Another, maybe better, comparison is Hollywood hiring a commercially untested, young indie director with an eye-catching arsenal of tricks in order to reboot a dying film franchise. The Trojans’ entire coaching staff is new. Of the 17 players on the roster, several are transfers and only eight are upperclassmen. There are other anomalies among their ranks, like a pair of Serbian forwards whose fathers played in Europe, and the first Indian American to play basketball for a BCS team. Even if none of it works, the press alone could generate huge box-office returns. To push the metaphor even further, the Trojan Tip-Off was like the Trojans’ teaser trailer; quick cuts of all the drop-your–Milk Duds/meme-generating highlights with none of the plot holes or clunky dialogue.

Before the scrimmage began, Enfield gave a brief and tame speech to the crowd, promising, “I guarantee this team will be fun to watch.”

And it was. Alley-oops went off like bottle rockets, and the pace was hectic. The best moment may have come toward the end, when buoyant senior J.T. Terrell tried to set himself up with a bounce pass off the glass but was thwarted by Omar Oraby, a 7-foot-2 senior from Egypt, who intercepted the ball, then took it coast to coast before putting down a gangly dunk.

Just below one of the baskets, a group of 12 or so guys in shorts and flip-flops watched the game. They were all members of the Trojan Knights, a student group that supports the school’s athletic teams and has been around since 1921.

After the scrimmage they talked dutifully — with the practice of sports commentators — about the team’s potential and how the excitement on the court will transfer to the crowds. They explained how they’re looking to brand a student section behind the basket called “The Enzone,” with a picture of Coach Enfield’s head standing in for the “O.” They acknowledged that not much was expected from the team this season.

“Being ranked 11th out of 12 in the Pac-12 is definitely the biggest slap in the face you can get,” said senior Max Reza. “I don’t know how good this team can be, but I think this team can be competitive.”

As much as they were excited about Enfield, they didn’t overlook the actual players on the floor. “[UNLV transfer] Katin Reinhardt came up and introduced himself to us before the game,” said junior Konrad Mueller. “There’s a lot more personable players like that.”

And maybe that’s it. As you get older, you realize you’re mainly watching basketball to admire the way people can effortlessly and marvelously do things you can’t. But the USC scrimmage made you want to play, to get on the court and chuck up a 3 for the hell of it. Because if they’re going to leave you open, you might as well take it.