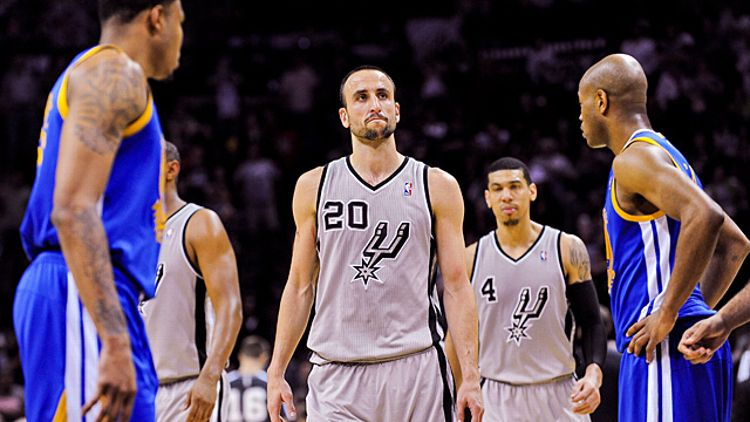 With the 56th pick in the 1999 NBA draft, the Golden State Warriors selected Tim Young, a 7-foot Bay Area kid who grew up in Santa Cruz and played college basketball at Stanford.

“Tim’s a presence,” said Warriors head coach P.J. Carlesimo. “He’s got good size, he does a little bit of everything — passes the ball well, shoots the ball well, he can block some shots. He worked out very, very well for us. Obviously, we know him very well. He’s absolutely a first-rate person.”

During his brief 25-game NBA career, Young made 13 of his 39 shots and logged a total of 137 minutes. But this was not a horrible draft pick; many players taken at the bottom of the second round never see the light of an NBA court. However, the very next pick in that draft would prove to be one of the best second-round picks in NBA history.

As a weary Ernie Johnson was winding down the last few minutes of TNT’s draft coverage, there were only two picks remaining. Johnson said, “Let’s see who San Antonio’s gonna take.” Then the camera trained back upon the familiar podium, where NBA deputy commissioner Rod Thorn stood and spoke:

“With the 57th selection in the 1999 NBA draft, the San Antonio Spurs select Emanuel Ginobili [gee-no-BEE-lee] from Argentina.”

Johnson: “He plays for Reggio Calabria in Italy. He’s 6-foot-6, a 2-guard. He is a native of Argentina.”

Rick Majerus (TNT analyst): “This kid understands coming off of a screen, and he understands moving off the ball to get his shot, and he’s very sound defensively, I’ll tell you that. I think that that’s a good pick at that point in the draft.”

Majerus was right, but it’s doubtful he had any idea how good of a pick that was. Maybe nobody knew. Even the Spurs, who had drafted Leon Smith with their first-round pick, would be fibbing if they said they knew; 5,060 days later, the kid from Bahia Blanca just reminded us again. Last night, he added another clip to his highlight reel and another bullet on his Hall of Fame application. Almost 14 years after that 1999 draft, the Warriors are wishing they had picked Manu at 56.

Ginobili’s career will likely leave behind four legacies. First, he’s one of the best second-rounders ever. Second, he’s the only active NBA player to catch a flying bat, unwittingly igniting an animal-rights firestorm. Who can forget the PETA official statement:

To bludgeon a 4-ounce animal to death, it takes either a small man or a totally unthinking one—with no respect or consideration for lives humbler than his own. This is a time when athletes in particular need to be on their best behavior around any animal and show that they have brains and a heart, not just reactionary brawn.

Bats always try to avoid contact with humans, and there are plenty of easy ways to keep bats out of a basketball arena (or your home). We hope that the next time someone’s life is on the line, Manu Ginobili will take just a few seconds to think before he acts.

Third, Manu will always be associated with the first group of truly influential international NBA players. Along with Dirk Nowitzki and the Gasol brothers, Manu has shown that you don’t have to be from America to be a great NBA player. In 2013, it’s easy to forget how American-centric the NBA used to be. Even the 1998-99 Spurs had little if any international flavor (depending on whether you count Tim Duncan). In contrast, the 2012-13 Spurs had eight international players on their opening-night roster, and many NBA rosters include guys from France, Spain, Brazil, Australia, Italy, and elsewhere. Now, virtually every team has at least one international scout, scouring countries like Ukraine and Greece in search of the next Manu or Dirk.

Manu’s fourth legacy is stylistic. He’s a big, attacking guard who loves to shoot 3s, and his brand of play foreshadowed future NBA trends. Long before Jeremy Lin or James Harden, Ginobili’s shooting portfolio favored shots either very close to the rim or behind the 3-point line. If everybody played like Manu, there would be hardly any midrange shots in the NBA. In fact, this is the shooting profile that the league as a whole is currently trending toward. Both LeBron James and the Houston Rockets, for example, are taking markedly fewer midrange shots these days.

Ginobili’s shot chart from this season reveals a few things. Beyond the arc, he performs pretty much at league-average, with the exception of the corners, where he’s quite good. His chart reveals that he hits only 34 percent from the spot where he hit his huge game winner last night; he made 23 of his 67 attempts there this season, slightly below the league average of 35 percent. 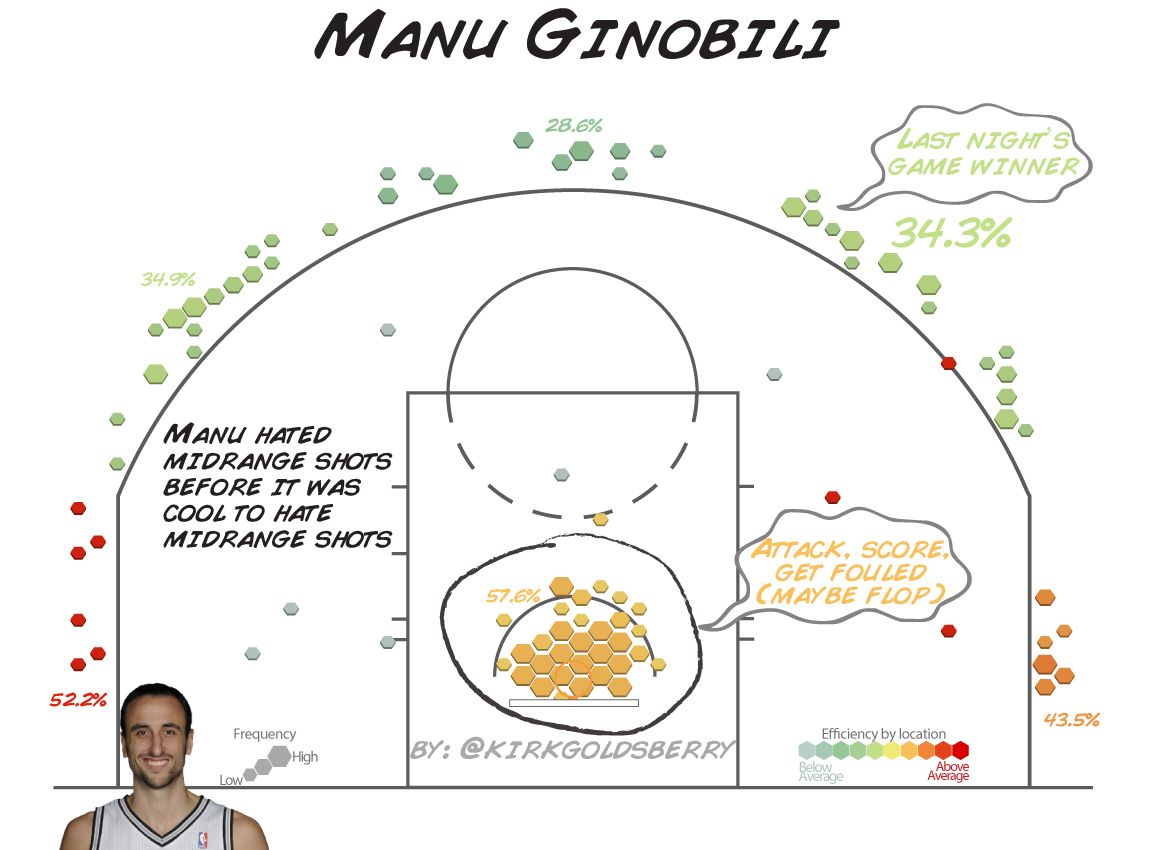 Manu’s chart also shows that he’s still very effective near the basket, which remains central to his game. It’s also a place where many of his backcourt peers around the league fail to score efficiently. As an attacker, Manu is fearless, and the enduring image of his game might be him careening into the restricted area, getting fouled, and falling to the court. Because of his fearlessness, it’s no surprise that he gets hurt a lot. Still, few other players can match Ginobili’s abilities to either score, get fouled, or make borderline insane passes that usually work out somehow.

Manu Ginobili is a treat to watch. He still provides the Spurs with a huge spark off the bench that enables them to frequently “win” the ends of quarters or outscore their opponents’ second units. But he’s far more than just a bench guy. And as he proved last night, Ginobili remains part of the Spurs’ crunch-time lineup that, although old, still has something left in the tank. In the next few weeks, we’ll see just how much.

Songs for a Blue Warriors Fan