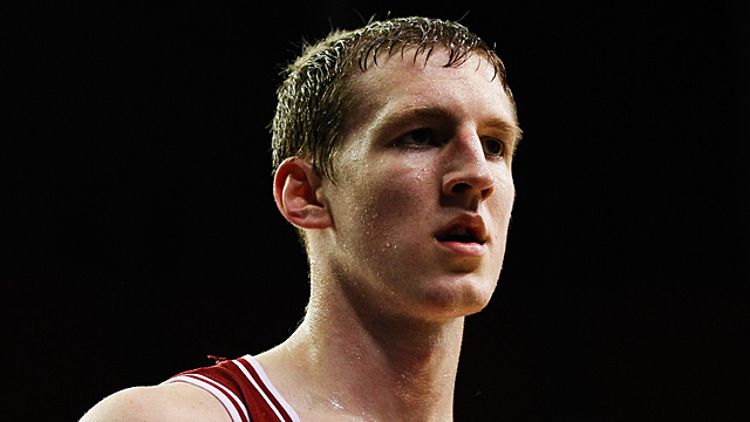 Last week, we looked at the Dangerous Outsiders, the Royal Blues, and the Title Snipers. This week, we turn to four legitimate championship contenders. So far we’ve examined NC State, Ohio State, and Louisville. See the box below for those links. Now, it’s time for the no. 1 team in all the Americas — the Indiana Hoosiers.

If there was one moment last season when a college basketball game stopped obeying the usual laws and got all transcendent on us — when fast-paced, free-flowing athleticism meshed with the beauty of complex execution and became a kind of sublime, gasp-inducing display of fulfilled offensive potential — it came during the Indiana-Kentucky shootout in the Sweet 16.

When I look back at the 2012 tournament, that’s the game that will stick in my memory. Hoosiers coach Tom Crean attacked Kentucky with a game plan that some called ballsy and some called insane. Either way, they were right. He played Kentucky’s game, at Kentucky’s speed. You have to wonder if at some point the week before, a timid assistant tried to approach Crean and say, “Um … coach? Just so we’re all on the same page, you know we’re playing Kentucky, right? The Kentucky? The main one?”

The really crazy part is that his players were zealots for the cause. Free of self-doubt, 100 percent committed, onboard from the start. They believed in the mission. They played like they could run Kentucky off the floor, or at least exchange blows for 40 minutes, and advance. It was a bold show of cojones, and those are few and far between in a college basketball landscape where scoring keeps decreasing and teams become more predictable and cautious every season.

The result? Well, it was spectacular. Indiana played its best offensive game, by raw efficiency, since an early February win over Illinois. They shot a better percentage than Kentucky, they held their own on the boards, and they never stopped running. With 10:30 remaining in the first half, they trailed 29-20, and it was at that exact moment when the best seven minutes in the college basketball season began. Christian Watford (who became an Indiana legend earlier in the season, against the same team, with this spine-tingling shot) scored 13 points in seven minutes, Jordan Hulls dished out a slew of assists, and with 3:29 left in the first half, Indiana took a 43-39 lead. For the first time in the tournament, and maybe for the first time since December, Kentucky was reeling from a shot to the stomach.

We all know how it played out. The Wildcats responded to that body blow by breaking out the heavy artillery and scoring with almost-surreal offensive efficiency. After about 72 frenzied possessions for both teams, Kentucky came away with a 102-90 win.

But it’s important to remember those moments, late in the first half and early in the second, when Indiana was officially out of their minds and the future champions had to pause for a moment of silent respect. Because while those Wildcats are now off making their millions in the NBA, almost every one of those Hoosiers is back, cojones and all. And that loss, in the year’s most gripping game, marked them as the team to beat for a season that hadn’t even begun.

Indiana: The Perfect Team for an Imperfect Year

The Gist: What you’ve heard from me a million times during these previews, and what you’ll hear from pundits all year, is that the title race is wiiiiiiide open. It’s been repeated like a favored line of scripture, and it happens to be true, but it doesn’t mean we lack an elite team. With studs at every position, Indiana is poised to complete a program revival that Crean started with a 6-25 season in 2008-09. There are a lot of demons to be exorcised from a program that was in ruins not too long ago, and the Hoosiers find themselves in the perfect year to chase a redemptive title.

Strengths: Take your pick. You want a dominant 7-foot center, a near-unanimous preseason All-American, and a front-runner for Player of the Year all rolled into one? Meet Cody Zeller. You want a smart senior point guard who shoots the lights out and has defied expectations his entire career? Jordan Hulls is your man. What about another senior, this one 6-foot-9, who shoots 44 percent from 3, hits big shots like they’re layup-line gimmes, and can defend any position on the floor? Christian Watford will suffice. Need a swingman with a chip on his shoulder who plays every game like he’s itching for a fight? That’s Will Sheehey. For good measure, how about a freshman McDonald’s All-American and the no. 2 point guard in his class, with a lightning-fast first step and an incredible name? Yogi Ferrell will steal your picnic basket. And last, what would you say to a Big Ten all-defensive team selection who can get to the rim and bring the house down with earth-moving dunks?

Well, my friend, let me take you back to that December game against Kentucky, to the frozen moment in time when Victor Oladipo looked at Darius Miller, narrowed his eyes, and said “I’m about to end this man’s whole career.”

There’s no shortage of offensive firepower with the Hoosiers, and the great thing about Tom Crean is that he’s never afraid to use it. Indiana was well inside the top half of the country in tempo last season, and with an extra year of chemistry it’s a good bet they’ll play even faster this time around. It’s no surprise, then, that Ken Pomeroy projects them first in offensive efficiency; they’re going to score and score and score. There are no cracks in the Hoosier facade, and they’re on the right side of the philosophical divide between fast and slow.

Weaknesses: Defense, if you want to nitpick. Oladipo and Sheehey are unrepentant stoppers, but Jordan Hulls has trouble guarding opposing point guards man-to-man, which should make the Michigan matchup particularly interesting (or not … Trey Burke will likely draw Oladipo instead). Down low, Watford is coming off a foot injury this summer, and he wasn’t the most naturally gifted athlete to begin with. Zeller is a little better at offense than he is at defense, but that’s mainly a compliment to his offense.

The thing is, you can proclaim the flaws all you want, but these guys were still the 64th most efficient defense in the country last year, and are predicted to be top 20 this season. When you consider the inevitable defensive sacrifices that come with playing an uptempo offensive game (there’s a reason the “best” defenses in the country usually play Wisconsin-style stall-ball on the other end), those numbers are even more impressive. So if defense is a weakness, I guarantee Crean will live with it.

Other than that, the bench is a little suspect outside the sixth man (whether that’s Hulls, Ferrell, or Sheehey). Freshman Jeremy Hollowell is a solid rebounder who morphed into a very good scorer late in his high school career, and redshirt junior Maurice Creek can light it up in the rare moments when he’s healthy. It’s unclear where sophomores Remy Abell and Austin Etherington fit in, or if they do at all, but the development of either one would be a huge boon for Crean. But the truth is, he needs only role players from the bench. He might end up with much more, but he won’t have to settle for less.

Relevant Les Misérables Quote: We use this gimmick in honor of the forthcoming movie, and just because nothing says college basketball like musicals. This is the final Les Mis quote of the previews, and I’ve definitely saved the best for last:

“Do you hear the people sing? / Singing a song of angry men! / It is a music of a people who will not be slaves again! / When the beating of your heart echoes the beating of the drums, there is a life about to start when tomorrow comes!”

The trademark chorus of Les Mis belongs to the Hoosiers, a program with big dreams that have survived some pretty rough times in the Kelvin Sampson and Mike Davis eras. And, if we’re being honest, it wasn’t so great at the end of the Bob Knight era either. But this could be the year, and everyone knows it. So will you give all you can give so that their banner may advance? Some will fall and some will live … will you stand up and take your chance? The blood of the martyrs will water the meadows of … Bloomington.

Confident, Insightful Projection: National champions. They’re my choice. Hoosiers? (Get it? Seriously, prepare yourself for a lot of Hoosier puns this year. It’s the only downside of Indiana being good again.) Statistically, is there a greater than 50 percent chance that they’ll actually pull it off? Not even close. But in this imperfect season, Indiana is the consensus top dog, and I’m siding with the majority. We believe in them, they believe in themselves, and all that remains is the nagging task of actually winning the damn thing.