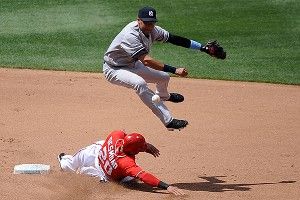 This weekend, the Yankees and Nationals did battle in Washington, D.C., in a three-game series. Whose correspondence on the duel would we most like to read? Frequent B.S. Report guests and friends of the Triangle John “JackO” O’Connell and Joe House, that’s who! We asked JackO and House to go back-and-forth about the series, the state of their respective teams, and whether they see the two squaring off in the World Series. Take it away, guys.

JackO: Housie, my man! How you doing? Good to talk with you … I guess. Every time I do one of these e-mail exchanges about the Yankees, I seem to jinx them. But with us being friends, me being a Yankees fan and you rooting for the Nats, this just seems like the right thing to do. (Damn that evil genius Simmons; even his jinxes make sense to me now.) As I started watching this series it brought back memories of 1994, when the Yankees had the best record in the American League and the Nats (then the Expos) had the best record in the National League. Maybe the winner of this series can get the World Series trophy that was never awarded in ’94? Yeah, probably not. The Nats look good this year, though — great young talent. I watched them a couple of weeks ago when they did the Lord’s work by sweeping the Red Sox at Fenway. You’ve got to be psyched about Stephen Strasburg, and Bryce Harper, and the team as a whole — yes?

House: Hello, JackO. Great to be exchanging baseball pixels with you under these AL/NL division-leading circumstances. Even if the Nats dropped the series-opener. And Brad “Once-Lights-Out-Now-Lit-Up” Lidge played a prominent role in the Nats’ loss. Which actually tells you something about this Nats team — why was Brad OLONLU Lidge in the game for that seventh-inning situation at all? Because he needed some pressure work after spending a month on the DL, the idea being that he might be an asset under similar circumstances in September. On the other hand, he might not be. Anyhow, you want to know if I’m digging this collection of young heat, speed, and stick? That’s a clown question, bro. Did you just see that game-tying eighth-inning home run from my guy Ian Desmond?!?

JackO: Fortunately I missed that game-tying homer. My daughter had a soccer game, and we had a new swing set to pick up and yard work to do. Sadly, my wife was adamant that Father’s Day didn’t start until Sunday morning, so I was tied up. I was listening to the game, but the last I knew it was 2-1, Nats. I came in to see that it was 3-3, so it doesn’t hurt as much, and now we’re well into extras, so my spirits are good.

I’m glad to hear that you’re psyched about the youngsters — I am too. Especially during Friday night’s game, when Michael Kay noted that Bryce Harper has said that he wants to play for the Yankees someday and he wears 34 because Mickey Mantle is his favorite player and 3 + 4 = 7. Hopefully the Yankees clubhouse guy had a chance to go get Bryce’s uniform measurements — it’ll save time later.

The Nats are definitely scrappy, though, and the fans seem into it, which is good. I see an advertisement behind home plate that says the Wallflowers are playing after the game on July 21. Are you fired up for that? Do you think they open with “One Headlight” or close with it? Encore? What do they play in between?

House: BTW, I’m watching this game from the kitchen while making a week’s worth of pasta for my kid. Because soccer and swing sets and kiddie dinners is how we roll these days. #oldschool #justold

Anyhow, your last message and the double Brad Lidge just gave up to the least-clutch Yankee (“big” Tex) reminded me of something: I hate the Yankees. I forgot how they get every freaking call, like the play at the plate at the bottom of the eighth in which Tyler Moore was clearly safe. Should have entered the ninth with Tyler Clippard coming in to close out the game. Instead, we got Lidge’d.

JackO: Rafael Soriano is doing his best Brad Lidge impression right now. Two on, and here comes future Yankee Bryce Harper. It would be a shame if he beat his future teammates right here.

That’s a tough one for the Nats. Sorry. The Yankees are a buzz saw right now. Tex came through for the first time in a long time, but it is Father’s Day weekend. That’s like Christmas for him. We’re both such modern men when it comes to fatherhood. Don Draper wouldn’t be caught dead at a kids’ soccer game or cooking pasta. Let’s drink some scotch and smoke a pack of cigarettes tonight — me in celebration, and you to soothe your nerves.

House: True fact: I’m headed out the door right now to a tequila bar. So D.C.’s no. 34 clearly did not take his Natitude pill this morning. You should have seen what Andy Pettitte did to him earlier this game: made him look like a 19-year-old rookie. I intensely dislike losing this way, which is one of the very best things about this 2012 Nats team — first opportunity in 15 years for me to get invested in baseball again.

Since swearing off the Orioles following the ’97 season (#angelosreasons, ironically Davey Johnson’s departure was the last straw for me), I’ve only had a couple short flings with baseball. Even when the Nats arrived in 2005, the novelty was better than the baseball. (Don’t get me wrong: I had season tickets the first three years, but the best moment I saw in person was a 455-foot home run to right field in RFK Stadium by Barry Bonds.)

So, unreasonably, I’m looking for that moment this season where the team’s identity goes from “exciting upstarts, great story” to “must be taken as serious contenders.” Beating the crap out of second-tier AL East teams while getting swept by the Dodgers and losing series to the Marlins, Yankees, and Orioles suggests too much of the former. But like I say, I’m not being reasonable.

JackO: Well, there you have it — a sweep. But the Nats acquitted themselves well. There were no blowouts. If your quest is to be invested in baseball again, I think you’re there. It’s a fun, interesting, resilient team and they could make some noise in the National League. The Yankees are on fire right now. They’ve won nine in a row for the first time since 2009 and we all know what happened that year! A bad weekend for the Nats might have been inevitable at this point. Hang in there, good luck the rest of the way, and maybe we’ll see you in October. If so, maybe we can exchange e-mails again. I think this weekend broke my curse.

House: That was not very much fun. Woke up today to see that Brad Lidge wouldn’t be available to blow today’s game because he was designated for assignment. Unfortunately, that was the highlight of the Nats’ day. One stat tells you all you need to know for the weekend: The locals were 4-24 with RISP. That is bad natitude. I suppose there is no shame in running into the class of the majors on a major tear, but it sure would feel better if the Nats had pulled out the Saturday game. I guess it is also important for this young team to get some playoff-atmosphere-type reps under its belt. I would just prefer they weren’t 1-8 in such games (Dodgers, Orioles, Yanks).

But truly, I’m fired up to be this disappointed. It’s the middle of June, the Nats are in first place, and the kids are alright. Maybe they aren’t as good as the Yankees, but this is the closest they have ever been. Thanks for the October thought, JackO — I’ll certainly be rooting for it.