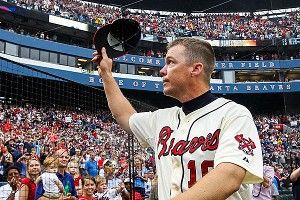 Just looking at his numbers, Chipper Jones had a forgettable final regular-season homestand. Actually, his performance was abysmal, going 1-for-10 for the weekend, with a lone single lucky enough to break through the infield during Sunday’s win against the New York Mets.

But to everyone except for the third baseman himself — who noticeably struggled with his ongoing slump — his level of play was beside the point. Braves fans at Turner Field were far more concerned with sending off their beloved icon with a celebration worthy of his 19-year, soon-to-be–Hall of Fame career.

On Sunday, Jones’s mere presence brought the crowd to its feet close to 10 different times in a game where all he contributed was a hit, two walks, and a handful of routine defensive plays. Between Friday night’s tribute ceremony and Sunday’s final regular-season plate appearance, Braves fans unleashed one thunderous round of applause after another — every time Jones stepped onto the field, off the diamond, and even around the large no. 10 cut into center field’s grass.

Turner Field saw three consecutive sellouts to end the regular season. The Braves have only sold out five games total in 2012, and on numerous occasions, attendance has dipped low enough for both Grantland and Chipper himself to notice.

Considering this might have been the last chance to see no. 10 in person — other than the one guaranteed wild-card play-in game later this week — fans seized the potential final opportunity to pay homage to the modern legend.

Before Friday’s game, the Braves honored Jones with a 30-minute tribute ceremony, featuring appearances by Governor Nathan Deal, Bud Selig, Bobby Cox, Braves president John Schuerholz, Brian McCann, and several others. The organization also outdid itself in the gift department, presenting Jones with a custom-engraved pool table from his teammates, a third base presented by Hank Aaron, a home plate made of Turner Field’s bricks, 10 local baseball fields to be refurbished and preserved in Jones’s name, and a trip to Hawaii.

They also intend to give him his locker — yes, his actual clubhouse locker — custom installing it in his house after the season. To be fair, that’s probably a better option than making some poor rookie inherit his mammoth cubbyhole next spring.

“That is a pretty cool gift,” Braves manager Fredi Gonzalez said about the locker in Saturday’s pregame press conference. “My idea was to leave the locker [at Turner] and leave his name on it. I think there’s only been one like that — Hank had it at Fulton County. The other one was Thurman Munson [at Yankee Stadium].”

Jones had his own parting words for his teammates, organization, and fans — which he shared several times over the course of the series.

“I said it the other night,” he said on Sunday as he reflected on his words from Friday’s tribute. “It’s not just the forty or fifty thousand people that are here in the stands. It’s the thousands and thousands of people listening on the radio, the millions of people watching on TV. They’re all a part of Braves country, they’re all a part of my family, and it’s been an honor to try and entertain them for a couple hours each and every night the last couple decades.”

The Braves’ weekend-long festivities capped off a season filled with gifts and tributes from numerous other ball clubs; everything from bratwursts to surfboards. According to Tom Glavine, Jones doesn’t particularly enjoy being in the spotlight like this.

It wasn’t hard to see or hear what Glavine was referring to.

“The word I’ve been using all week is overwhelming,” Jones acknowledged. “I don’t know if I’m worthy of all of this. I’m certainly not, I have my faults and whatnot, but [when] you got that much love in the building, you feel like you’re ten feet tall.”

As Braves general manager Frank Wren has observed Jones’s farewell tour this season, it has reminded him of working with the Baltimore Orioles during the 1999 campaign. That year, Cal Ripken Jr. came nine hits away from reaching the 3,000-hit club — with plenty of fanfare along the way.

“It’s very similar,” Wren says. “We’re talking about Hall of Fame players who played their whole career for one franchise and are beloved by the fans of that franchise, and really, respected by every other. As a player, that’s the ultimate compliment when the opposing team respects you for what you’ve done against their team.”

According to Baltimore Orioles pitcher and onetime Philadelphia Phillies hurler Randy Wolf, Jones garners near-unanimous reverence, even though he was a longtime division rival/victim.

“People respect how he’s played the game over the years,” he said. “He’s definitely got a presence when he’s out there and definite confidence, but he doesn’t do it in a way where he’s trying to stand out. He stands out by playing the game right and being a good player.”

After Sunday’s 6-2 win, Jones acknowledged the tremendous support, but admitted he was ready to focus on this week’s series against the Pittsburgh Pirates as well as the play-in game on Friday — whether it’s versus the Cardinals or Dodgers.

“I’ve been fine all weekend. I’ve been kind of cowboy-ing up all week trying to hold back the tears,” he admitted. “As much as I tried to shrug it off and downplay it, there were times when it was a little too much to handle.”

Gonzalez had asked Jones “two or three times” if he could rest the third baseman toward the end of yesterday afternoon’s game. Jones balked each and every time, not wanting to get distracted with the “tipping of the cap and standing ovations” until after the game.

“I never want to come out of a game,” Jones adamantly stated. “I want to finish it out and be out there for the handshakes after the game is over. I’m not going to stop working just because I’ve got four games or a handful of games or 15 or 16 games left,” he said. “I’m dedicated to my job and my craft. That’s not going to stop until the end of the season.”

Max Blau is a staff writer at Creative Loafing and contributes to the Atlanta Journal-Constitution, NPR, and Paste Magazine.