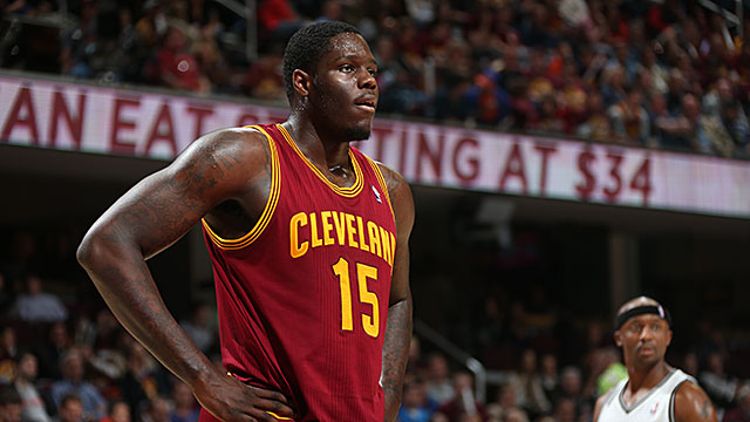 It’s almost as if Anthony Bennett is the victim of some voodoo carnival fortune-teller incantation that has caused him to switch bodies with an unknown JV player, who even now is stroking 3s and dunking on hapless 15-year-old opponents in a dusty high school gym. The lively, sweet-shooting college athlete who finished with power around the rim has been replaced with a rain-slicked pile of loose bricks covered with a tarp that starts breathing hard after walking from the bench to the scorer’s table. He’s a project, though just what kind is hard to say. Bennett was slowed over the summer by a shoulder injury, coupled with a diagnosis of asthma and sleep apnea, all of which, perhaps, have contributed to his overall appearance as a guy who spent those balmy months trying to tunnel his way out of a giant tub of Häagen-Dazs.

Through 13 games, Bennett’s torpid form has staggered its way to 22 percent shooting, 26 percent True Shooting, two points per game, and a PER of 1.2. Plug those numbers into Basketball Reference, and you get a list that includes such NBA luminaries as Kris Joseph, Von Wafer, Antoine Rigaudeau, and Rolando Ferreira. Any list of players where the guy with the best career is Von Wafer is a list of infinite goth-teen sorrow written in Billy Bob Thornton blood-vial ink — i.e., you do not want to be on it or allow the paper it’s written on to touch your bare flesh.

So, it’s possible Anthony Bennett is a bust. Perhaps a bust to be spoken of in hushed tones down through the ages. Statistically, he’s been that bad, and the eye test does him very few favors.

A typical Bennett sequence from this still-young season might go something like this: He sets a high screen and then pops out to the 3-point line on the wing, receives the ball, and bricks a confidently taken 3 (alternate version: catches the ball on the left block, considers his options for about two seconds too long, throws up a bad turnaround). Running back, Bennett gives credible effort on help defense, hedging out and recovering, which, through some wicked combination of bad fitness and chronic breathing disease, exhausts him, and he commits a silly foul after being beaten toward the rim. Play stops and Bennett paces the sideline, hands on hips, shoulders rolled, head down, mouth-breathing like a freshly hooked bass. Court time: approximately two minutes.

The thing about Bennett is not so much that he has no idea how to play, as we’ve seen before with other raw young talents who end up performing below expectations. Bennett is in the right places and knows where he wants to get his offense. He is just brutally out of shape, and that extra girth and lack of ability to drive oxygen to it result in his appearing to be playing up to his waist in a Chuck E. Cheese ball pit.

Recently, Mike Brown has floated the idea of starting Bennett at small forward, a proposition which at first glance smacks of “Got any better ideas?” But there’s a Slate-pitch kind of logic to this thinking. Giving Bennett more minutes at a predictable point in the game might induce something like fitness-by-brute-force. Just think of the first eight minutes of the game as Bennett’s personal trainer dragging him out of bed for a morning jog. Then, most important in my opinion, there’s the potential confidence boost offered by the trust Brown shows in starting Bennett.

In a sport where missing half the shots you take is a wild success, confidence is of supreme importance. I’ve never been one to hate on the haughty egomania displayed by NBA players, the regal self-given nicknames, the third-person swaggering. Humility is a good and fine virtue, unless you happen to have a job that entails millions of people looking at you all the time and commenting on your failures. If that’s the case, and self-identifying with a venomous snake is what keeps you from dwelling on the bleached bones lining the side of the road, who am I to judge? Doubt, if allowed to take root, quickly turns to fear, and like my dude Frank Herbert says, “Fear is the mind-killer.” Lacking the internal steel to take on an animal avatar or shout, “Anthony Bennett says, ‘No more questions!’” upon walking into the locker room, sometimes an authority figure saying, “I think you can do this” can make all the difference. I mean, what have they got to lose?

Good-bye to All Cats: Watching Charlotte in the Torture Chamber