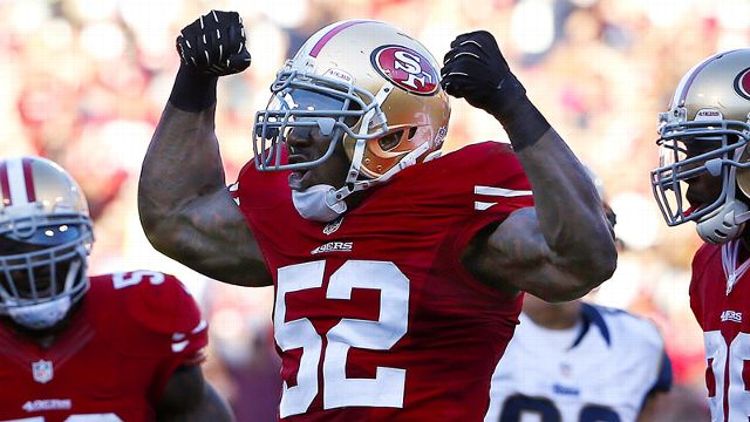 With Monday night’s shellacking in the books, we now have a rough sketch of the NFC playoff picture. The Seahawks need something biblical to derail them from home-field advantage, Detroit’s win over Green Bay (and the Bears’ loss to the Vikings) gives the Lions a clear path to the NFC North title, and Philadelphia’s win over Arizona gave the Eagles a leg up in the NFC East and the Cardinals a knock down the wild-card ladder. New Orleans and Carolina still play each other twice, and with the Panthers refusing to slow down, that division is still very much in question. But for the most part, we have a pretty defined idea of what our six or seven playoff teams/seeds will look like:

Of all those teams, San Francisco seems to be the one no one’s excited about. Detroit has Calvin Johnson; Philadelphia has Nick Foles. The Niners are just a team that a year ago seemed poised to annually challenge the Seahawks for NFC supremacy but instead have taken up residency among the conference’s also-rans. With Arizona dropping a game in Philadelphia, even a loss to Seattle would leave the Niners as the likely final team into the playoffs. But for a team one play from the Lombardi Trophy, that finish is nothing less than a disappointment.

San Francisco’s season seemed to start on the same note as last year’s finished. Dynamic quarterback Colin Kaepernick threw for 412 yards and three touchdowns in Week 1, and the 49ers were set to be the frightening offensive team they were at the end of last season. That lasted about a week, and it wasn’t only because Kaepernick’s next stop was Seattle. In the next two months, Kaepernick threw for more than 200 yards just once while the Niners’ offense limped along. Some of that was a renewed commitment to the run in Weeks 4-8 (a stretch in which San Francisco managed to put up more than 30 points per game thanks to a mix of Kaepernick and Frank Gore running over defenses), but anyone watching could see that this was a passing game that wasn’t quite right. That feeling was only confirmed when San Francisco dropped its next two games as Kaepernick threw for 218 total yards.

There are reasons to think that the offense, which currently sits at 14th in DVOA, can be better by season’s end, but the Niners’ role as the undesirable wild-card opponent is actually a product of their defense. Through eight weeks, San Francisco sat at 14th in defensive DVOA — not very 49er-like. And it wasn’t just one area holding them back. The Colts — who haven’t been able to run the ball since — ran all over the 49ers. Finding a reliable rotation in the secondary was a problem — one that was resolved by jet-setting Nnamdi Asomugha and letting Tremaine Brock take over as the team’s third cornerback. Aldon Smith wasn’t playing well even before he took time away from the team for treatment of substance-abuse issues, and in the five games Smith missed, San Francisco had eight sacks from traditional pass-rushing spots.

San Francisco didn’t give up many points over that same stretch, but that isn’t saying much against five teams with an average rank of 24 in offensive DVOA. It’s been the performance of the Niners’ defense since the team’s Week 10 bye — against two top-10 offenses — that has provided a reason to take notice. In Week 10, Carolina managed just 10 points as Cam Newton went 16-for-32, and taking away DeAngelo Williams’s 27-yard touchdown, the Panthers’ running backs averaged just three yards per carry. The next week, San Francisco held the Saints (who’d been averaging 35 points per game at home) to just 23 and was one Ahmad Brooks penalty from stealing a win. Blowouts against Washington and St. Louis followed, and as things currently stand, the Niners rank sixth in defensive DVOA.

It’s been an inconsistent year, but this is still a defense with the best duo of inside linebackers in football, an aging but very good Justin Smith, and plenty of other talent. Aldon Smith was absolutely dominant against the Redskins and their Pro Bowl–caliber tackle Trent Williams two weeks ago, and, combined with Ahmad Brooks, will likely be able to give the Niners the pass rush they need going forward. Ray McDonald returned to the lineup last week after missing two games. Glenn Dorsey is playing well in his first season in San Francisco. If and when Tarell Brown gets back, the Niners’ secondary should be the best it’s been all season.

Questions about the offense are still warranted, especially considering the most recent injury to Joe Staley, who may be the best left tackle in football. Alex Boone was very serviceable in his absence, though, and Staley and Mike Iupati should be back and playing by the playoffs. Having its offensive line intact and getting Michael Crabtree back in the fold may be enough to bring the Niners’ offense to a level that complements a resurgent defense. Philadelphia is a scarier wild-card matchup than Detroit, but if I’m either of those teams, I’m rooting for just about any other team in the league to leap San Francisco for that last spot. When it comes to pesky wild-card teams, those loaded with talent and familiarity with the playoffs are the ones to avoid. It’s been a down year for the Niners, but it feels like through it all, they’re still lurking as a team everyone would rather just avoid.