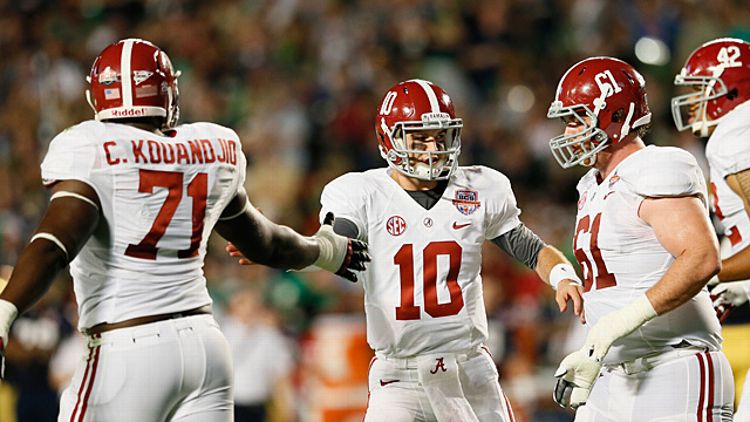 Legends were made last night, in the same way they always are. At game’s end, with a third title in four years secured, a coach already cast in bronze was doused in Gatorade. A quarterback with the perfectly smeared eye black and the perfectly telegenic girl kissed a hunk of crystal. Everything about Alabama’s 42-14 win seemed the pristine image of college football lore — except, of course, that its best player spent all night with his gut spilling out of his shirt.

Last year, Alabama’s defense earned much of the credit for Nick Saban’s second title run. Six Tide defenders went in April’s draft — four in the first two rounds. It was touted as one of the best college defenses ever, and in Bama’s 21-0 rolling of LSU in the national championship game, AJ McCarron and friends hitched along for the ride. Against the Irish, the point total may have doubled, but the players of the game still didn’t earn a single one of Bama’s 529 total yards. They won this one up front, and they wasted no time in showing how.

From the first drive, it was clear that the Alabama line was set to take it to Notre Dame all night. Irish star Louis Nix had an admirable showing against All-American Barrett Jones in the middle of the field, but to either side, the night belonged to the champs.

On Alabama’s second drive, top-10 talent Chance Warmack beat up Manti Te’o to free Eddie Lacy for an easy 20-yard run that was followed by a score. On its third, Cyrus Kouandjio planted freshman defensive end Sheldon Day on his back to spring Lacy for another long gain. In the past, when the SEC has dominated title games, the cited disparity has been about speed. Last night, Alabama’s biggest advantage was actually where many thought the teams were most even. With Nix, and Te’o, and Stephon Tuitt, Notre Dame’s strength was supposed to be the teeth of its defense. But the Tide had little trouble kicking those teeth in.

Jones has been the most talked-about member of Bama’s front, and Warmack and right tackle D.J. Fluker will likely join him as first-round picks come April, but the play that’s stuck with me is Kouandjio’s body slam. Pancakes like that are supposed to stay on high-school highlight reels, against linebackers who check in at about 170 and watched last night’s game at a buddy’s house with a case of Natty. They’re not supposed to come in National Championship Games against the supposed best defense in the country.

The 6-foot-6, 315-pound Kouandjio was the fourth-ranked prospect in the class of 2011 according to Rivals — three spots behind Jadeveon Clowney and one spot ahead of De’Anthony Thomas. Two years earlier, it was Fluker who ranked in the top five — two spots ahead of Matt Barkley and three ahead of Trent Richardson.

The point is that when we think about SEC dominance, it’s normally reserved for the sort we saw from Alabama a year ago. Nick Saban’s second title with the Tide came about because a slew of big, fast defenders gave him a defense that seemed fit for Sundays. But the superiority actually goes far beyond that.

There are some schools, like Oregon, that are destinations for the best skill-position talent. It’s why in the past five seasons the Ducks have corralled three top-10 running back prospects. It may also be why those recruiting hauls have brought just one top-10 tackle and not a single top-10 guard. For schools like Michigan, the opposite is true. The Wolverines have recruited more top offensive linemen than they can actually play at once, but not many pass catchers want to end up in Ann Arbor. Bama is better at every position, at every level, on both sides of the ball. Saban’s recruiting coups aren’t limited to the secondary or his skill players. They can come anywhere.

Next year’s crop brings more variety: a 6-foot-6 tight end, a top-15 defensive end, another running back. Add them to what Saban got from his freshmen this year, and to what sort of player McCarron seems likely to become, and the Tide may be another same-but-different beast again next year. What we know is that two years in a row, Saban will send a chunk of players to the NFL on the draft’s first day, and they’ll be a cross section entirely separate from the ones that went a year ago. The Tide are rolling, all right, and they’re doing it any which way they want.