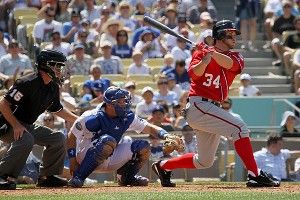 We went there, in an attempt to witness History.

We sat in a seemingly endless queue of cars on Elysian Park Avenue on Saturday, stuck in the kind of L.A. traffic that Angelenos never tire of complaining about and everyone else never tires of hearing about (you guys love it, right? We knew it!), listening to Vin Scully tick off the outs, afraid that we’d experience The First At-Bat via radio, next to an enormous black pickup truck flying a Lakers flag big enough to stake an eventual claim in Planet Kobe. Had this sellout crowd actually mobilized for the Chosen One’s major league debut? Were this many Dodgers fans lining up for the coincidental celebration of Strasmas? Or was it the lure of Double-Bobblehead Night, with 54,000-plus hoping to get their greedy hands on the Chang-and-Eng-esque abobblemination that was the conjoined Don Drysdale–Maury Wills collectible on offer at the gate? Baseball fans love them some bobbleheads, even more than their scorecards and inflatable mini-bats. Trust us, it was the bobbleheads.

But we made it. Barely. We watched from the edge of the Reserve Deck concourse as Bryce Harper, called up by the Nationals a day earlier and humbly batting seventh, took his on-deck circle hacks. Would this be the Second Coming of Mickey Mantle, of Barry Bonds, of Ken Griffey Jr.? The crowd booed History like it had already launched some 500-foot bombs into the bullpen (History had actually done that in BP, for the record), like it had kicked new owner Magic Johnson in the balls during a pregame meet-and-greet. And then History grounded out — hard! — to Chad Billingsley, a man whom brick shithouses are rumored to admire for his formidable squatness. Bryce Harper was 0-for-1. But we were there for it. And when we recount the moment for our kids years hence, the ball will have struck the pitcher with such force it freakishly deflected his mitt, with both ball and severed hand lodged firmly inside, to James Loney (in our hazy memory it will be Don Mattingly, going rogue as player/manager to mark the legendary event) for the out. Come to think of it, maybe Sandy Koufax was pitching. The weight of History makes it kind of blurry. But the crowd’s cheer was wild, appreciative. The place was alive with hating this new kid.

Baseball things happened, and then Harper came to the plate in the top of the fifth, to a renewed shower of boos. Moments earlier, a woman wearing the jersey of Dodger great “Piglet” excused herself from her seat, either unaware or indifferent to this latest brush with History. Fortunately, the slack of enthusiasm was gathered by a nearby child in a purple-and-gold Manny jersey — during the Dark Times, always cross-merchandise, that’s what Tommy Lasorda famously said — as Bryce the Nyce (we are still working on that one) lifted a lazy fly to left, the proverbial can of corn, as if a young Babe Ruth were the one knocking it from a high shelf with a stick. This one Memory will allow to stand as it actually played out; even the greatest ballplayers fail often, though this one, fast as Rickey, did manage to round the bases all the way back to home plate by the time it landed. Shoot us, a fly out is super fucking boring.

It was a long two innings before History returned to the plate in the top of the seventh, though we did hallucinate multiple JumboTron cameos to keep Harper fresh in the imagination: mashing faces with Selena Gomez on the Kiss Cam, Dance Camming up a mechanically impeccable Running Man, playing hide-the-baseball under three Dodgers caps. Down came the boos, reliable as clockwork and hostile as a World Peace jaw-jack, but this time History would not be intimidated. As the Wave rolled by our vantage point (we get it, you people love seismic oceanography), Bryce doubled off the base of the center-field wall with such force a scorch mark was burned into the frantically retreating Matt Kemp’s back. When the future kids ask about this one, the ball went through Kemp, killing him instantly and conveniently preventing his upstaging late-game heroics, but more on that later. History had been made, and we were there to see it. No, it wasn’t a homer, that would’ve been a hacky origin story. It all started with a double. And the laser-death of the Dodger center fielder. Now that’s a yarn for you.

History would come again in the top of the ninth, with one out and runners on first and third and the score knotted 1-all. With the game on the line, the Stadium mustered its lustiest boos yet, as if Barry Bonds himself had materialized to squat over home plate and deposit a Clear-enhanced turd at the epicenter of Blue Territory. Boo all you want, Harper may have thought to himself on this fourth trip up. I’m breaking this tie with a really great sacrifice fly. And so he did. 2-1, Nationals, then 3-1, Nationals, after a Wilson Ramos single. Kicked in the gut and obeying the biological Angeleno imperative to avoid traffic, fans began to flee for the exit; within minutes, we could see the snaking procession of red tail lights over the right-field wall. We live in L.A., we don’t blame them. We understand. Traffic is just the worst. Let us tell you this great traffic story we have sometime! Anyway.

In the bottom of the ninth, those fans who had left missed a fan, who’d suddenly vaulted a wall in right field, streaking across the outfield toward Harper like an asshole comet. Bryce did not move. History would take care of it, one way or another. (This time, History sent like 10 security guys to converge on the guy.)

They missed Henry Rodriguez spraying 102-mph fastballs everywhere but near the catcher’s mitt, and the ensuing rally to tie the game 3-3.

In the bottom of the 10th, they missed Matt Kemp — admirably still in the game despite the cannonball-sized hole punched through him by the Harper double — grabbing History by the scrotum, whispering, “This is my night, dude,” in its ear, and then launching a 429-ish-foot walk-off rocket over the center-field wall.

They missed Kemp rounding the bases to absolutely deafening, stadium-shaking “EMM VEE PEE, EMM VEE PEE” chants, firing his helmet into the air as he leaped into the giddy pile of teammates circling the plate, then high-fiving his mom through the netting behind home.

They missed Bryce Harper slowly walking in from left, glaring over at the celebration drifting toward the Dodgers dugout, the MVP chants both louder and more potent than the boos.