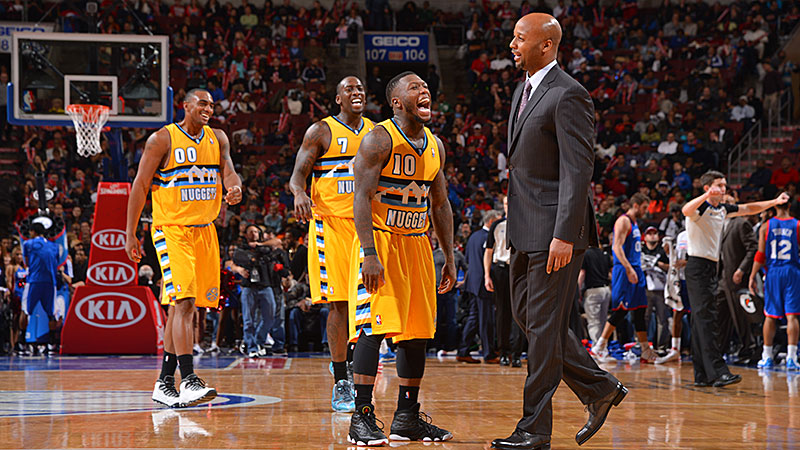 On Sunday afternoon, I found myself in Louis Armstrong International Airport in New Orleans, staring at Kenneth Faried. He was standing in line at Copeland’s Cheesecake Scoop Cafe. He was lost in his music — wearing enormous Beats headphones — and, presumably, cheesecake. Faried’s flight back to Denver was delayed. But given the way the first half of the Nuggets’ season ended, I can’t imagine he was in any great hurry to leave New Orleans.

Denver dropped its final four games before the break as well as its first contest after (Tuesday night, against Phoenix). Before it broke for All-Star Weekend, it got smashed by 39 by the Pacers, and lost by 27 in Minnesota. The Nuggets sit at 24-28, with many of those wins coming early in the season. Ty Lawson’s career year has been curtailed by a nagging injury. JaVale McGee and Nate Robinson look like they are both done for the season. Danilo Gallinari is still recovering from the knee injury he sustained during last season’s playoffs and is not expected back on the floor until the 2014-15 campaign. Andre Miller has been exiled from the team after a blowup with coach Brian Shaw. And Faried looks like a shadow of his former Manimal self.

For as much as this season has been shaped by injury, the real story in Denver is one of management. High on thin air and running all the stop signs, George Karl’s 2012-13 Nuggets were everyone’s second-favorite team. After a disappointing first-round playoff exit, Karl was fired and the highly regarded Masai Ujiri migrated north to Toronto to work with Drake.

Enter Brian Shaw. The former Lakers guard had a reputation for developing talent, shaping problem cases into borderline All-Stars. His two crowning achievements were Andrew Bynum in Los Angeles and Lance Stephenson in Indiana. Whatever Denver would lose in tempo (Shaw was always going to install the triangle, wherever he wound up), it would gain in a young coach who seemed to be able to take players to another level.

A 24-28 record actually seems pretty respectable for a team that hasn’t had Gallinari all season, and that has suffered through long absences from Miller and Lawson. But going into the second half of the season, the mood in Denver doesn’t seem any better than Faried’s demeanor at the airport.

“I’m not even talking about playoffs now. We have to get back to the point where we can just play a complete 48 minutes and feel what it’s like to win a game.”

That’s Shaw, quoted in Benjamin Hochman’s revealing state-of-the-franchise column from the Denver Post. In that piece, you get a picture of a coach struggling to impose a set of standards and a style of play on a not entirely willing constituency, and without the absolute clear backing of the front office. Which brings up two questions:

1. In the modern NBA, with all the player power, and all the fetishizing of front offices, how much say does a coach have in how a team plays, and who plays for him?

2. Is this why it took so long for Brian Shaw to get his shot at head coaching in the first place?

Let’s table the first question for a second. Shaw is a no-bullshit guy who came up under the wings of the most successful coach in the last three decades of basketball: Phil Jackson. Yes, Jackson had four of the greatest players of all time (Shaq, Kobe, Jordan, Pippen), but between the Zen Master routine, popularizing the triangle, and his obvious success at motivating very rich and very successful men to keep striving for greatness, he will be remembered as the brains behind those teams, no matter the contributions of Tex Winter, Jim Cleamons, and the three Jerrys (Buss, West, and Krause). 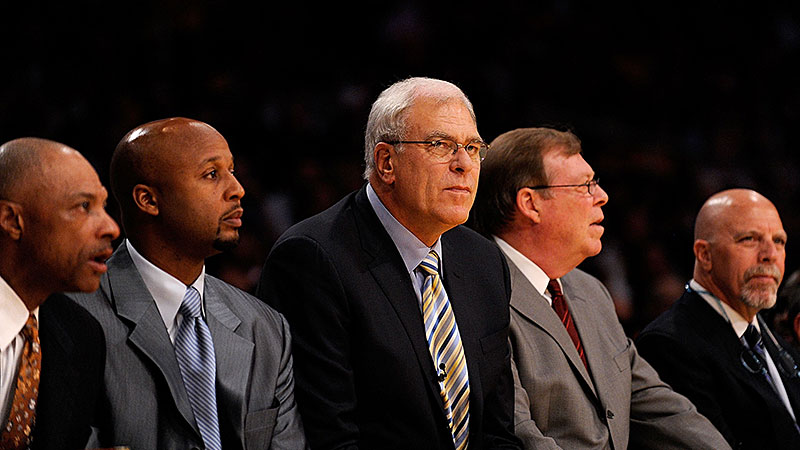 Shaw is a product of a basketball culture in which the coach was the university professor, psychologist, interrogator, father figure, and voice of God. He’s also a product of the ’90s NBA — forearms to the throat if you dared drive the lane, games played under one lightbulb, etc. When Shaw teed off and did this “get off my lawn” routine about his players wearing the signature sneakers of their opponents …

“Being on the Lakers, when guys would wear Kobe’s shoes when we were playing against him, he always would, in his mind feel ‘I got him, because he’s wearing my shoes.’ So, the guys who do wear KDs, we were talking yesterday; ‘Are you really going to wear these tomorrow when we play him?’”

… you can imagine Faried, McGee, and a couple of other Nuggets players sitting there, making the jerk-off motion. Take something as innocuous as the sneaker comment, and add it to Shaw coming into Denver and replacing a run-and-gun style with an inside-outside, half-court offense, and top it off with his fallout with the notoriously cantankerous Miller, and you see a guy who is an anomaly in today’s NBA: a coach who runs his team not as some part of a larger management system, but as the central voice of power in the franchise.

Maybe this is why it took Shaw so long to get a head coaching job in the first place; maybe he has never attempted to lower the volume of his voice. Think about NBA franchises; if I were to ask you to name the management avatar of any team, how many of them would be coaches? Doc? Pop? Thibs? Who else? Teams don’t belong to the Van Gundys, Karls, and Hollinses anymore. They belong to the Ujiris, Prestis, Hinkies, and Moreys. And that’s totally fine, but it’s a different landscape from the one Shaw grew up in.

This is a guy who probably believes the coach’s word is the final one. You can imagine that not sitting entirely well in previous job interviews, especially if said interviews were conducted by general managers or team presidents who viewed themselves as the architects.

Shaw, in his own way, acknowledged this recently when he was asked about whether Denver would try to improve at the trade deadline. “That’s on (general manager) Tim Connelly and (assistant general manager) Arturas (Karnisovas) and (team president) Josh (Kroenke) and those guys. I don’t even try to pretend the numbers and the salary cap and restrictions that you have from doing this and doing that … This year has been a year of discovery for me.”

He may be trying to shape the team into what he wants, even if that means icing out a contributor like Miller, but ultimately, Shaw is just like the guys he coaches: He’s an employee.

Former Memphis coach Lionel Hollins found this out the hard way. He’s another guy who built up a reputation as an excellent coach, shaping Memphis into a hard-nosed defensive team that perfectly represented the blue-collar identity of its fan base. Now Hollins is out of work, hoping for a call from Detroit. Why? Check this out from a story on MyFoxMemphis:

Was there anything he could have done that would have kept him with the Grizzlies? Hollins said he’s heard he was too stubborn and didn’t work well with the organization, but denies that a member of management walked onto the court and instructed a player on how to play.

The real story: they were doing a drill, a kid in a corner shot a three-pointer and one of the management guys jumped out and challenged his shot from the sideline.

“The only thing that made it a big deal is that it was during practice and I reacted, I mean I went livid, just like if a player messed up in a certain setting I may go livid.”

After practice was over, Hollins went up and said I’m sorry and the man apologized, too. They talked about it.

“Unfortunately it came out that I was trying to show management up but that’s not what happened. There was no conversation between management, person, or the player.”

It was John Hollinger.

I’m in no way trying to suggest that Hollins is being blackballed by a new breed of front-office guy with allegiance to Hollinger. But I am saying that moment is incredibly representative of a new day in the NBA. These teams do not belong to the coaches anymore.

If you’re starting from zero with a team these days, you’re looking at someone like Brett Brown or Steve Clifford, or someone with a track record of stability and fostering good player relations like Larry Drew. Maybe you take a flier on an inexpensive assistant like Terry Stotts or Mike Malone. What you don’t do is sign up a big-time, big-contract, big-ego guy who wants a four-year deal and a huge say in personnel. Nobody from the college ranks is being wooed with offers to run a franchise. John Calipari is not walking through that door. Tom Izzo isn’t either. There is no NBA version of Chip Kelly. Brad Stevens went to Boston from Butler at a time when expectations have never been lower for a Celtics coach. And he has practically no say in the team’s personnel.