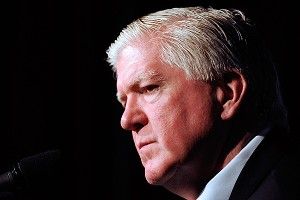 There’s really no way to spin it otherwise. Some people will try, because that’s how these things always work, but it’s futile. Brian Burke failed.

He came to the Maple Leafs in 2008 when it seemed that the franchise had hit rock bottom, and, as general manager, he never made it significantly better. He missed the NHL playoffs all four years. He took over a team coming off an 83-point season that everyone agreed was a disaster and managed to top that total only once. He compiled a .490 winning percentage, which, in a league that gives out points for losing, is indisputably awful.

All of that might have been acceptable if Burke, who was fired Wednesday, could point to an organization stocked with can’t-miss prospects. But the Leafs don’t even have that. The farm system is in better shape than it was when he inherited it, because it would’ve been nearly impossible for it not to be. But not by much, and with the (optimistically) possible exception of defenseman Morgan Rielly, it’s lacking the sort of top-tier young talent that almost all of today’s winning NHL teams are built around.

No playoffs. No blue chips. No progress. And, increasingly, no hope. That’s failure, any way you cut it.

So that’s the easy part. Now the harder question: Why? Why did someone who seemed like such a perfect fit for the job fail so spectacularly?

Remember, from the moment the Leafs started their GM search in the spring of 2008, the whole thing felt like a sham. What search? Brian Burke was the man for the job. It so happened that he was already under contract to another NHL team, but that was a minor complication that could be worked around. And by November, mysteriously, it had been.

In a town where the hockey media demands to be fed constantly, Burke was a soundbite machine. In an organization where meddling executives and board members kept sticking their fingers into every decision, Burke was an intimidator who’d send the suits scurrying. In the aftermath of years of aimless management that drifted along without a plan, Burke would look you right in the eye, tell you what he was going to do, and then go out and do it.

Most importantly for a franchise starving for a championship, Burke was a winner. Until, suddenly, he wasn’t anymore.

In hindsight, Burke doomed himself from the start. In a miscalculation that will become his legacy in Toronto, he decided that he wouldn’t rebuild, at least not in the traditional sense of burning everything to the ground and starting over. He wouldn’t gut the roster to collect high draft picks while ignoring the standings. He would not tank. Burke had no patience for that approach — “Maybe because of my age,” he’d offer later — so he set out to prove he could do it faster.

And let’s be clear: It didn’t have to be that way. Brian Burke could have stood up on his first day on the job and said, “Look, things here are a mess, and I’m going to roll a grenade into the whole operation. It’s going to be ugly and it’s going be painful, and it will stay that way for at least a few years and maybe more. But stick with me and I’ll lead you through to the other side.” Maple Leafs fans would have followed him into that battle with smiles on their faces. He had that opportunity. He declined it.

Instead, he made it very clear from Day 1 that he could turn the Leafs around more quickly. And he backed up that hubris by trading two first-round picks for Phil Kessel during his first offseason in Toronto. That Boston trade wasn’t the disaster it’s often made out to be — plenty of GMs would love for their worst trade to be the one that brought in a top 10 scorer in his prime — but it set the tone for everything that followed. Burke didn’t just call his shot; he tore down his safety net. And then the team he’d put his faith in took one step off the platform and plummeted.

And even more frustrating for fans, Burke seemed to insist on trying to turn things around with one hand tied behind his back. He refused to take advantage of loopholes in the CBA that other big-market teams happily exploited. He imposed his own personal trade freezes and railed against surprise offer sheets and tiptoed around asking players to waive no-trade clauses. His personal code of ethics always seemed to come first. When you’re winning, that makes you an admirable man. But when you keep losing, it makes you an admirable man who keeps losing, and everybody just sort of forgets about that first part.

Make no mistake: Brian Burke, the man, is about as admirable as they come. Oh, sure, he often came across as a thin-skinned bully, especially with the media. He also worked tirelessly for charity, was fiercely loyal in a business where few are, and carried on with an almost unimaginable strength after the death of his son Brendan. The important work done by Burke and his family to build acceptance of gay athletes has a chance to live on long after Burke’s time in Toronto has been forgotten.

But when it comes to wins and losses, none of that matters. (And please say a small prayer for Maple Leafs fans that this really is about wins and losses, and not about Burke’s ability to play nice with his new corporate masters as some have speculated, because if that’s the case, then this franchise might never win again and wouldn’t deserve to.) Burke may be a good man, but so far in Toronto, he hadn’t been a winning one.

Was he given enough time? Not really, in the sense that nobody who was around in 2008 thought the Leafs could be turned into contenders in less than four full seasons. Rebuilding from scratch takes at least five years, the conventional wisdom goes, and a check of the calendar shows Burke didn’t get that. If it takes you five hours to drive to your in-laws’ house and your spouse starts asking “are we there yet?” after four, you’re going to get cranky.

But Burke’s problem was that he was four hours into the trip and hadn’t made it out of the driveway yet. Or, to torture the metaphor even further, he’d made a wrong turn getting onto the highway and was speeding off determinedly in the wrong direction. Knowing exactly where you want go doesn’t mean much if everyone else can see that you’re not going to make it before time runs out.

For Brian Burke, time ran out. He failed. And he won’t get a chance to fix it now.